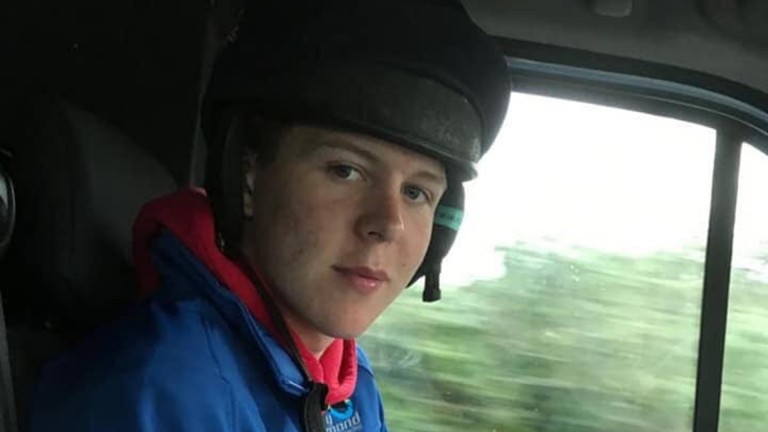 As we approach the end of mental health awareness week, there will be nobody more aware of its importance than Simon Jones.

It is not simply because for many years he ran mental health services for the NHS. Far more relevant, now and forever more, is that Jones's son, Tim, killed himself when aged just 17. Saturday marks the first anniversary of his death.

Everybody reacts to grief in different ways. Jones has grieved but he has also grafted, launching a fundraising effort that even before Tim's funeral had raised a significant sum of money now being used by Racing Welfare to seek a reduction in the number of lives lost to suicide.

The life of Tim was one his family had never envisaged could be taken in such a way. 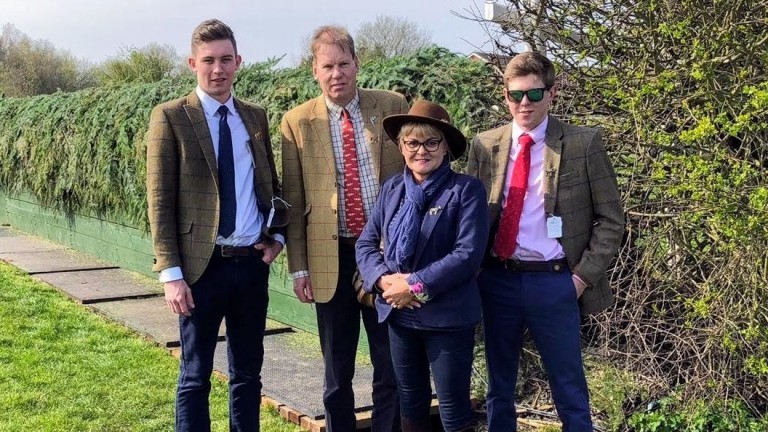 Tim Jones (right) with brother Christopher, father Simon and mother Sally during a trip to Aintree one month before he died

"He was mature beyond his years," says Jones. "We're a very sporty family and Tim was always the most naturally gifted of us all, but it was with horses that he really applied himself and from the age of eight he really loved them."

That love was nurtured at the Middleham stables of Micky Hammond, with whom Simon Jones was already associated through shares in horses. Tim began to spend time in the yard from the age of ten. He started helping in school holidays, riding out from when he was just 13 and joining the trainer at sales. Hammond entrusted to Jones former Gold Cup runner Motafarred, who was retrained by his new owner, by then so passionate about horses that he entered the pony racing scene and began to take part in eventing. His young life appeared to be moving along handsomely.

In October 2018 things started to change, although not to the extent it sparked any serious concern from Jones, his wife, Sally, or Tim's brother Christopher.

"We just thought it was his age," says Jones. "A couple of people in Micky's team told him he was being a bit of a prat but we didn't really think anything of it. He had a fallout with one of his mates but really it was just the sort of banter you expect from teenagers. He was quite a sensitive lad and maybe he had become over-sensitive." 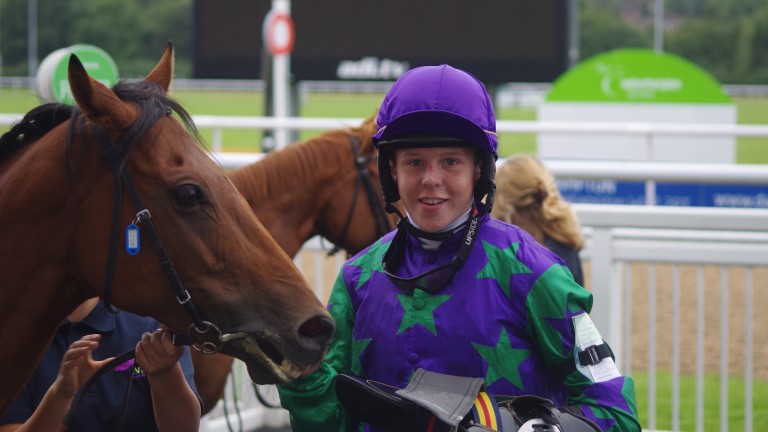 Just a few weeks before he died Tim competed in an eventing competition that formed part of the Badminton championships. "I had a conversation with him when we were driving back home," says Jones. "I said to him: 'What's your dream, mate?' He told me he wanted to be a racehorse trainer but said it would never happen."

With hindsight, those words might conceivably have meant more than was apparent at the time. However, even with hindsight his loved ones find it impossible to explain the horror that soon followed.

"The day before Tim died he had a laugh with his mum and was talking about plans for the weekend," says Jones. "There was nothing that indicated what he was going to do. I was over in France and spoke to him from there. I could tell he was a bit hacked off but there was nothing that made me think a catastrophic situation was coming.

"On the day itself he got up, sorted out some washing, had some breakfast and then went on Snapchat. His mates say that around lunchtime his messages suddenly turned dark. He changed his music playlist and the songs became more subdued. One of his friends contacted other friends and said something wasn't right. He felt it was almost as though Tim was saying goodbye. At about 5.30pm my wife got home from work and found him. Everyone, without exception, was stunned."

Tim ended his life in a violent manner, yet his final written farewell was strangely calm.

"His note was almost upbeat in many ways," says his father. "He said he had lived the dream but that all good dreams come to an end. He thanked us and said he hoped we were proud of him. There was nothing that set out why he was taking his life. It was like he was saying his life had been great but something had happened that had made him think: 'That's it.'

"We don't have a clue why he did it. It's the one question we would love to answer but probably never will. You go through periods when you think you've worked it out but you haven't. We simply don't know."

Nor would anyone plunged into such turmoil know with any certainty the best way to react. For Jones, a visit to see Hammond and his staff provided the motivation to ensure his youngest son could achieve something in death. 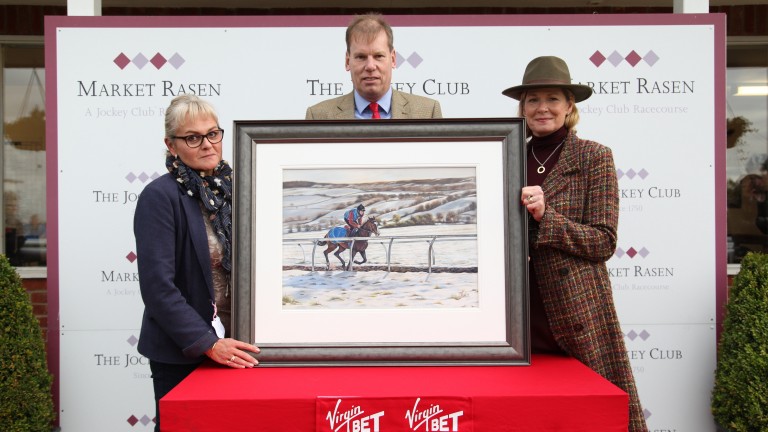 "A couple of days after it happened I went to Micky's yard because I knew people there would be upset," he says. "We got everyone together and it dawned on me how many young and potentially vulnerable people were in the room. There were some who had spent Christmas Day with us because it was their first time away from home and they had nowhere else to go.

"In rural areas you might not have the same access to support networks you have in a town. All Middleham has is a fish and chip shop and a pub, which means the way some young people deal with their problems is through a bag of chips and a lot of beer. What they are often not going to do is walk through Racing Welfare's front door in the middle of Middleham High Street. In racing that can be seen as the first sign of a weakness. I also think some in the sport still take the view people should be tough and able to deal with everything. However, what is one person's banter is another person's bullying.

"I thought if we could help them start to help themselves within their own groups it could provide a first step on the way to them seeking more formal and professional support. I also wanted to do something that, at a very selfish level, would give me something on which to cling. I needed something that in my mind would keep Tim here.

"Without telling anyone I set up a JustGiving page and decided if we could raise £5,000 that would be great. I also wanted to set a very clear objective, namely that the money would train mental health first-aiders with a target of having one in every yard." 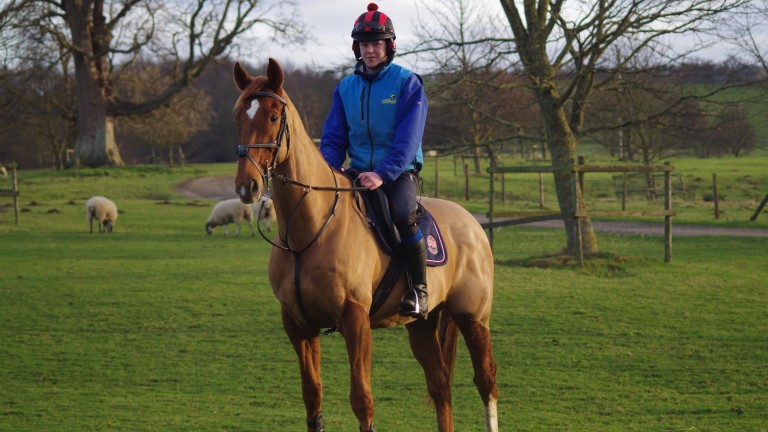 Tim Jones, who dreamed of being a racehorse trainer, was just 17 when he died
Simon Jones

That overall target remains in place, with excellent progress quickly made. In total, around £17,000 has so far been raised in ring-fenced money, even though major fundraising ventures were postponed due to the Covid-19 shutdown.

"The whole ethos underpinning the first aid course is to help people spot when something is different and to encourage people to ask questions," says Jones.

"Sometimes you need someone else to sense something isn't right. What we're hoping is if one or two people in a yard have a bit more knowledge they might spot something going wrong with one of their colleagues and ask the right questions, enabling the person who is suffering to move into the next level of intervention.

"It's the same as someone in the yard falling over and cutting a leg. Somebody will have first-aid training and make sure the person gets the leg washed and dressed. This is doing exactly that but with mental health. That's vital because if you get mental illness wrong it can go very wrong."

In his efforts to prevent others going through his own family's pain, Jones will run the rescheduled London Marathon in October and next year cycle from Cheltenham to Aintree alongside Christopher and two friends. He admits he will do it partly for himself. Mostly, though, he is doing it for his son and those who fall victim to the illness that parted them.

"We're a very close family," he says. "Whenever either of our boys did anything in their lives I tried to be part of it. I suppose this is an extension of that. I can visit Tim at his grave and say: 'I've done that for you, mate.'"

Donations towards the Tim Jones fundraising effort can be made here.

FIRST PUBLISHED 6:00PM, MAY 22 2020
Sometimes you need someone else to sense that something isn't quite right