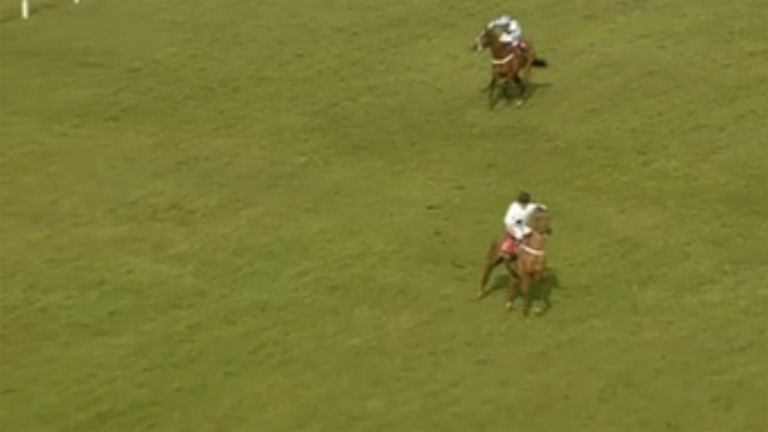 Stunned at Sandown: What's The Scoop has different ideas, and veers left up the straight
1 of 1
By Catherine Macrae UPDATED 10:01AM, JUN 11 2021

Throughout racing, there has always been the good, the bad and the ugly. However, on a few special occasions fans are graced with the downright wacky.

They may have slipped your mind, but they have not been erased from history and have brought us some of the funniest – and most dramatic – moments seen on the track.

In a new series by the Racing Post, we take a look at some of the wackiest races ever run, this time reliving the day What's The Scoop threw away his first win in a shocking change of attitude . . .

What's The Scoop appeared to be an unassuming candidate for wacky racing behaviour.

A €75,000 purchase for Michael Buckley, the son of Presenting returned two average runs at the start of his career, finishing third when 15-8 favourite on his debut, and fifth in his follow-up contest at Kempton under Barry Geraghty.

As a six-year-old, What's The Scoop was sent off on a quest to break his maiden at Sandown, dropping back to two miles. The four-horse novice hurdle was his third career start with Nicky Henderson.

The race was held on heavy ground in March 2016 and the gelding was sent off at 7-2.

Drama unfolded at the first flight where favourite Air Horse One, a future Cheltenham Festival contender, made a twisting leap, unseating Noel Fehily.

The field narrowed to just three runners and Geraghty was content to keep What's The Scoop at the rear as the pace was set by the Rod Millman-trained Starving Marvin. 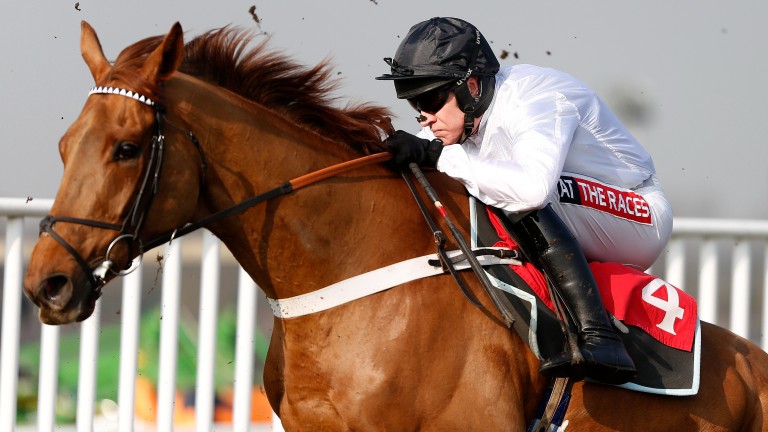 Towards the second-last, What's The Scoop and Starving Marvin breezed away from the quickly fading Bad Boy Du Pouldu, who was pulled up before the last.

In what was now a two-horse race, What's The Scoop cruised past the tiring Starving Marvin to stride into a comfortable lead after the last hurdle, and was poised to land an easy first win.

With a flying leap over the final flight, What's The Scoop pulled out a six-length lead, with Geraghty looking behind to check on the rapidly slowing Starving Marvin.

In that moment, seemingly from nowhere, What's The Scoop flung his head up and took a sharp left turn, cantering straight at the rails towards astonished spectators. 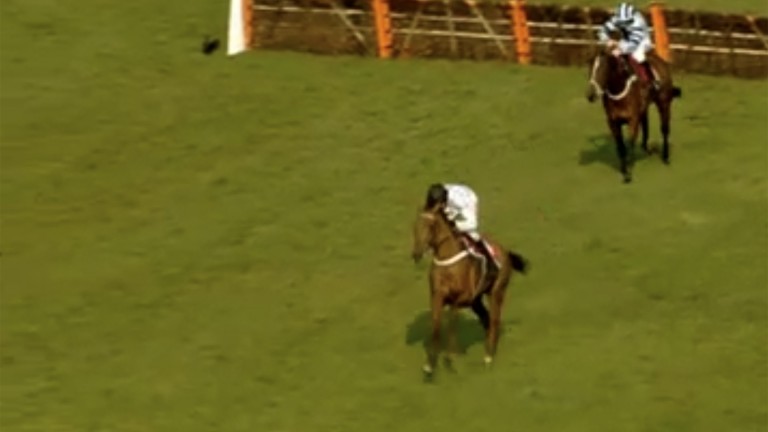 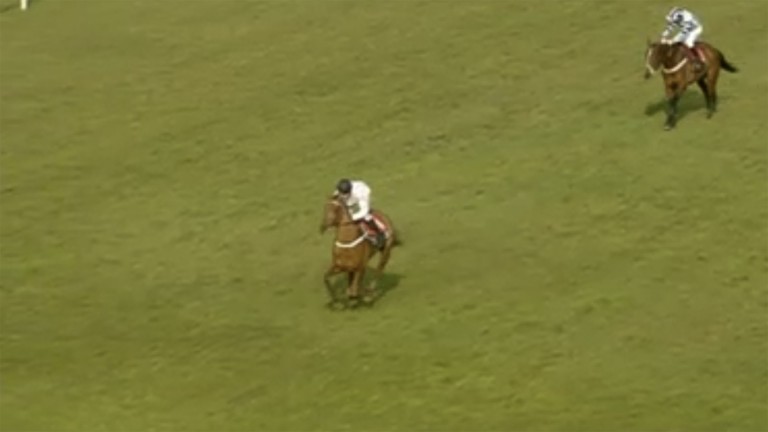 Stunned at Sandown: What's The Scoop has different ideas, and veers left up the straight 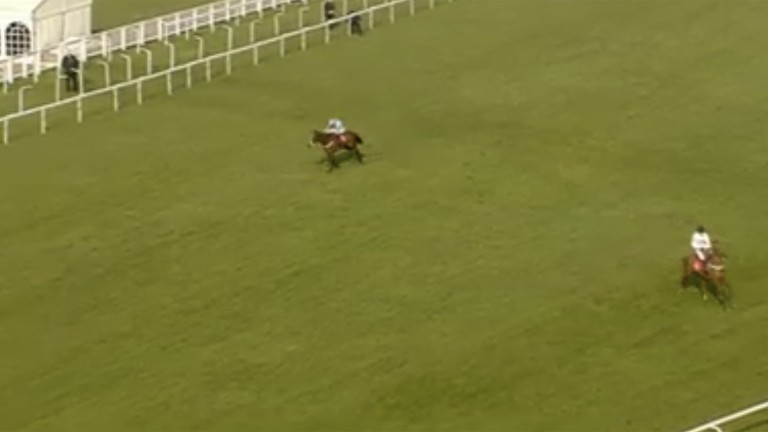 Geraghty can't get What's The Scoop to alter his course, and he heads to the grandstand 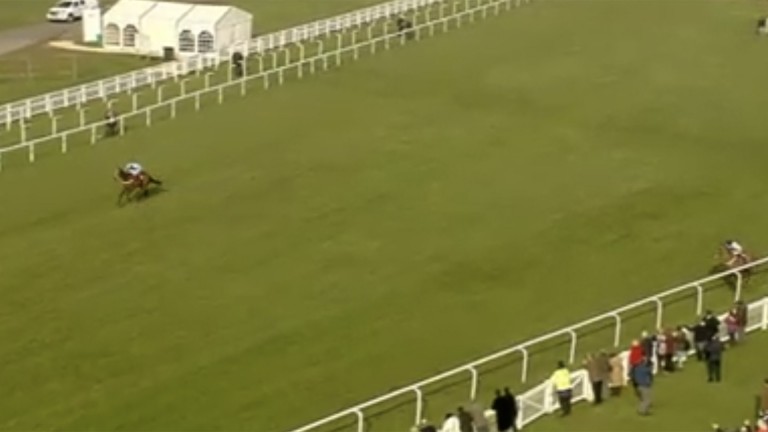 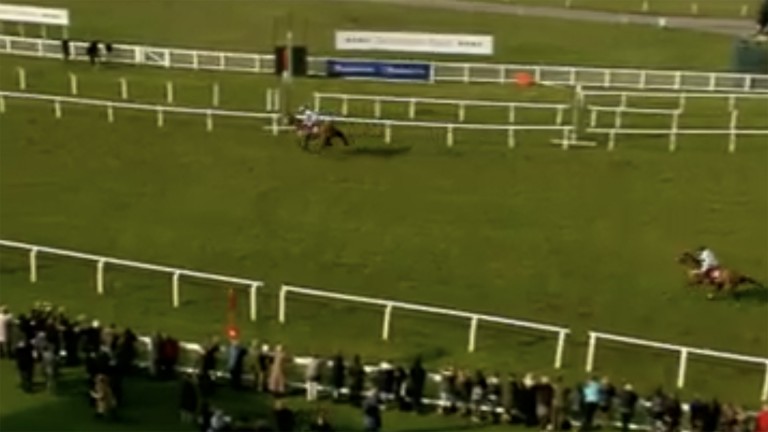 Geraghty fought to bring the gelding under control but his motions seemed to have little effect.

What's The Scoop only stopped when making contact with the track rails, as the public moved back to put some distance between themselves and the oncoming horse.

Finally in charge, Geraghty was able to steady the ship and send What's The Scoop back towards the finish, but despite rallying was unable to catch Leighton Aspell and Starving Marvin, who had made the most of the distraction to stagger tiredly over the line.

Held up behind other pair, not fluent 3rd and 5th, came near side in straight and closed to lead 2 out, soon clear, 6 lengths lead and cantering when turned 90% left, careered towards rail 100yds out and stopped, got going again but no chance to recover (jockey said gelding ducked sharply left on the run-in)

I wouldn't have thought he was tricky until that day; he never gave any indication he was going to do anything like that.

He travelled into the finish brilliantly, and led just before the last. It was all plain-sailing and we had reservations about the ground being soft, so I was being patient with him for that reason.

He was going on to win his race, but then halfway between the last and the line he just veered violently left. 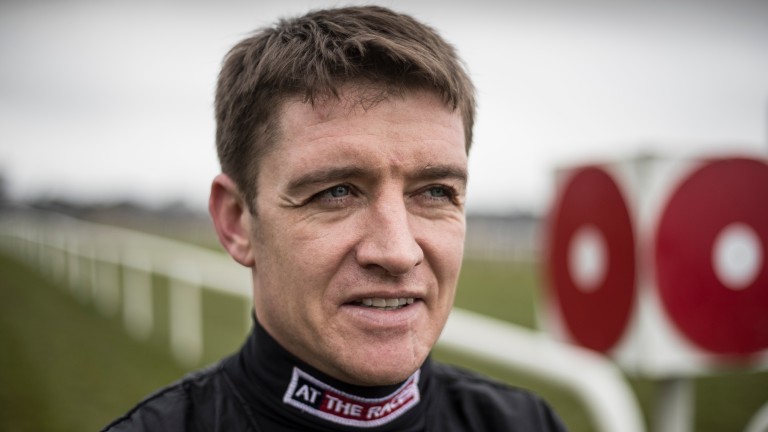 Barry Geraghty: "When he ran on again I even for a second thought he might get back up"
Patrick McCann (racingpost.com/photos)

I think he thought he was at the chute to the track; he was heading for home as far as he was concerned until he realised there were rails in front of him.

It was only when he hit that dead end that he changed his mind and headed up the hill.

When he ran on again I even for a second thought he might get back up to win, but we couldn't do it.

I don't recall the rest of the race so well, but that finish I still remember.

He was travelling really well and clear over the last, when Barry checked behind to see if there was anything to challenge him, and there really wasn't.

The rail opens up on the left-hand side at the run-in, so suddenly there was a lot of space on that side.

There was a photographer there and maybe the clicking on his camera startled him – he was quite a flighty horse and used to spook at birds – and he just went straight for the rails.

It's hard to know what happened. One second it was going to be a win, I was thinking the horse might be something nice, and then he's trying to leave the race and head off to the streets.

I've had a lot of horses run in races, but moments like those stand out in the memory for years to come. 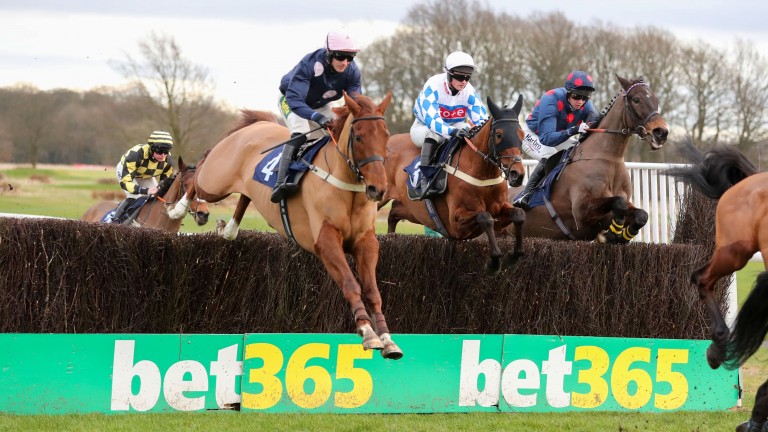 What's The Scoop: eventually claimed his first and only win at Newcastle in January 2020
John Grossick (racingpost.com/photos)

What's The Scoop spent the rest of his career in the hunt for the maiden win thrown away that Sandown afternoon.

After three more races with Nicky Henderson, the now eight-year-old gelding was sold to Sue Smith, who took over ownership and training of the horse.

A string of novice hurdles followed before he was entered in chasing company, and in his last race at Newcastle in January 2020 What's The Scoop finally picked up that first win he was so long overdue.

FIRST PUBLISHED 9:30AM, JUN 11 2021
I've had a lot of horses run in races, but moments like those stand out in the memory for years to come

'I wouldn't say I have depressions but I sometimes wonder if this is worth it' 'Doors are made to be closed' - come ride with me as we win the Galway Hurdle Canford Cliffs: 'He was one of the best racehorses in the last 50 years' Taghrooda: 'She turned towards the stands and everyone was going absolutely mad' Back to normal? We road-test the new raceday experience 'He'll never recover from that!' - the heroics of Killultagh Vic and Ruby Walsh