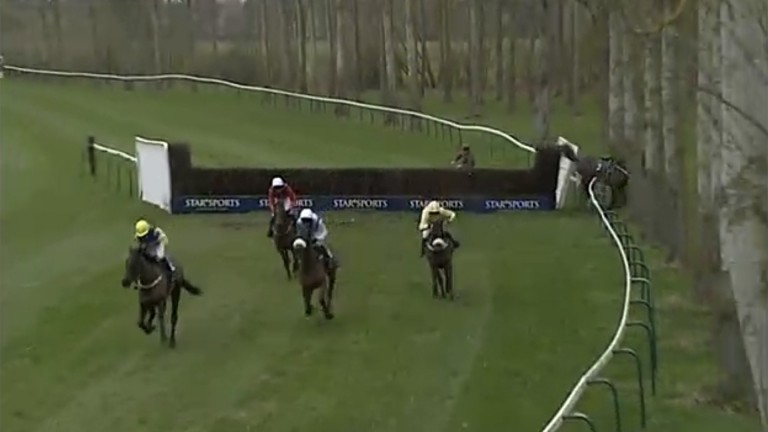 A helpless Sheehan can only watch on as The Lion Dancer disappears into the woods
1 of 1
By Catherine Macrae 9:30AM, AUG 6 2021

In a new series by the Racing Post, we take a look back at some of the wackiest races ever run, this time remembering an eventful novice chase at Towcester during which The Lion Dancer took an unexpected detour.

A winning point-to-pointer in Ireland, the Charlie Mann-trained The Lion Dancer had not taken well to fences under rules and was seeking a return to form after four disappointing runs in the 2017-18 season.

Jockey Gavin Sheehan was taking his first ride on the six-year-old at Towcester, with the runner backed into 9-2 having been a 100-1 shot on his previous two starts. 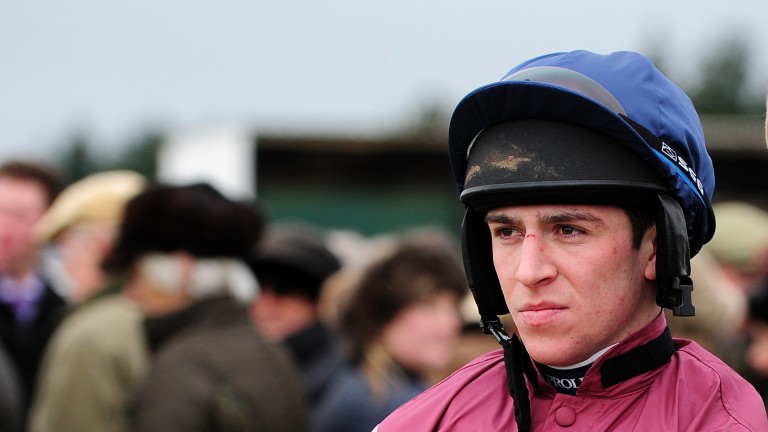 Gavin Sheehan: "He was jumping out into the woods. I had to go in and catch him"
Harry Trump (Getty Images)

Sent off favourite was The Bay Birch, on the hunt for her first win for Matt and Stan Sheppard, while Skipping On, Wood Pigeon, Kavanaghs Corner and Tower Of Allen filled out a relatively well-matched field for the 2m4f novice handicap chase on February 8, 2018.

Things quickly went awry as the field began to hang left as early as the second fence, led by the outsider Tower Of Allen. Nestled at the rear, the Simon Earle-trained Kavanaghs Corner was the only runner to keep on task, as the other jockeys were forced to make hasty corrections to keep straight after every obstacle.

Wood Pigeon was the first to go, pecking on landing over an open ditch and unseating Fergus Gregory.

As the field continued to urge each other sideways with each fence, the situation for The Lion Dancer came to a dramatic conclusion at the tenth fence.

The five-horse field straightened out once more after the ninth fence, and Sheehan, who was now running last, began to push The Lion Dancer along.

Under his rider's urgings, The Lion Dancer charged towards the tenth before cutting sharply behind the pack, once more to the left, and in a sudden moment of rebellion plunged straight into the rail.

Sheehan, who had been pushing for the jump, found himself unceremoniously parted from his ride and left horseless atop the fence, while The Lion Dancer jumped the wing and disappeared off the course into the Towcester woodland. 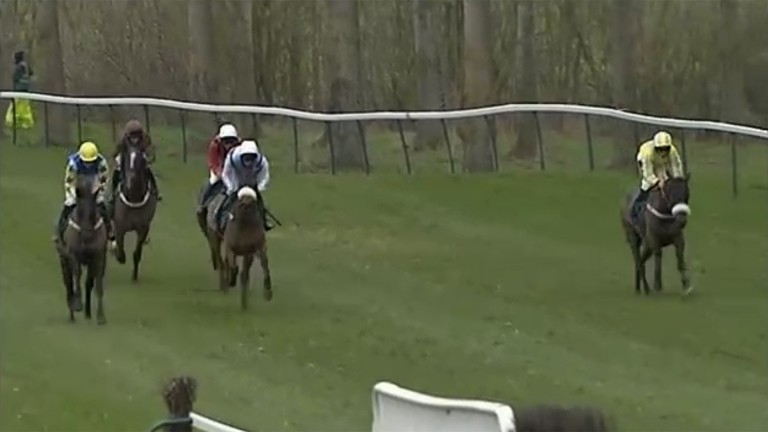 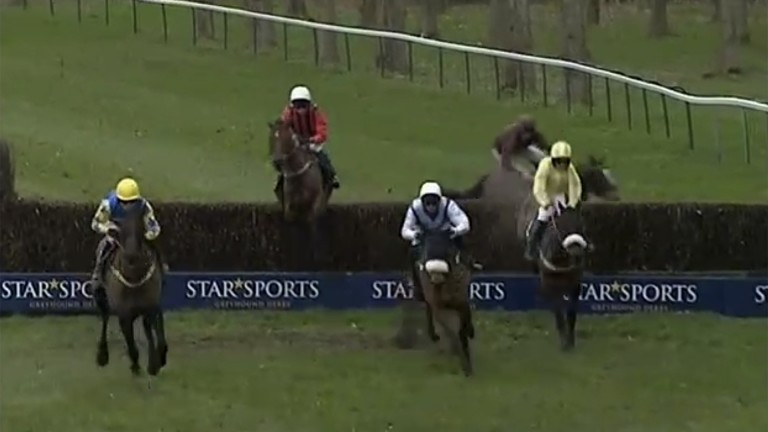 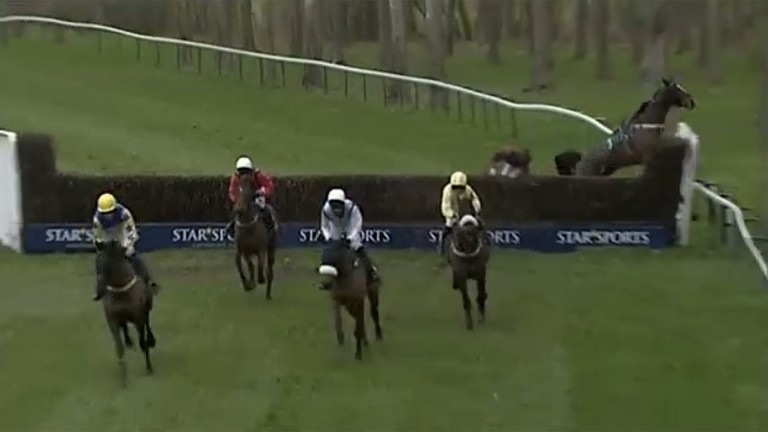 But rather than stop, The Lion Dancer jumps though the wing of the fence

The drama of the race didn't end there. Skipping On was the next to blunder, tipping Patrick Cowley three out, before the labouring Tower Of Allen fell at the next.

The race was left to be settled by the final two runners, with The Bay Birch landing her maiden win after drawing clear at the last.

Kavanaghs Corner's jockey Conor Shoemark looked behind him after the final fence to check for rivals, and found none.

He's one of those that I would call a bit of a dude on a going day, very straightforward and easy-going. But when he was at Towcester there was no good me telling him what to do, because he wasn't having any of it.

That day the horses in front just started jumping left and he ended up following them. Mine had just started coming off the bridle, and when they came to the fence he ducked in behind all the other horses, which is unusual, and left me up in the fence.

I looked over and he was jumping out into the woods. I had to go in and catch him. He stopped quickly, there was nowhere to run really, and I managed to get him back.

I trotted him up and down, but there were no vets, nobody had come, so I ended up jumping on him and hacking him back. I told the stewards that I knew the horse, he was grand and moving fine, never fell, but they ended up giving me [a ban of] four days.

He's a big monster of a horse and did have that bit of a quirk to him – when he was going he was going, and when he wasn't there was no asking him anything.

We were hopeful when we put him in the race. Gavin Sheehan rode him and was coming up the hill about four out. The whole field were going left and he followed them. You can't go very left, because if you do you end up in the wood and then bang – he followed it a bit too far, I think. 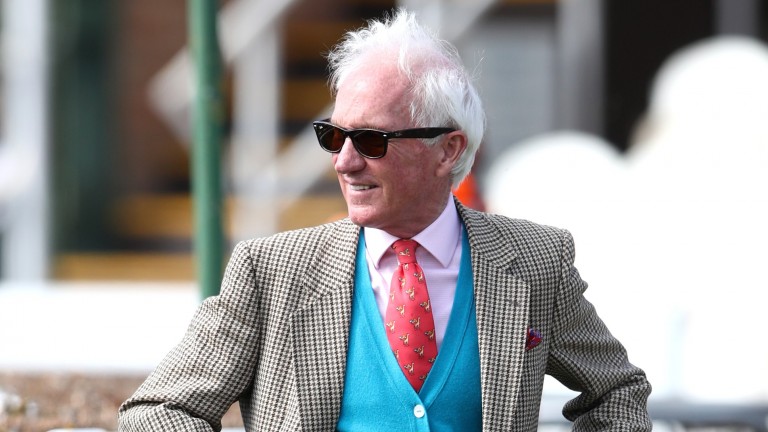 He got through the rail, I don't even know how, and was away in the trees. I thought that was it, but Gavin managed to catch him, cantered back to the line, and got a four day suspension for it.

The Lion Dancer is a character, he won three races after that in a row, but he wasn't blessed with brains. He's just a big, dumb horse, he's like a village idiot. He wasn't smart, got a bit light and went off the course. It was just one of those things.

Sheehan's four-day suspension was eventually overturned after the jockey lodged an appeal, and the Lion Dancer went on to have a wildly unpredictable career, winning a month later under Sheehan by 29 lengths.

FIRST PUBLISHED 9:30AM, AUG 6 2021
When he was at Towcester there was no good me telling him what to do, because he wasn't having any of it

Shishkin stays ahead of Energumene - and left-handed Cheltenham should help him Shorter trip of Champion Chase means Shishkin is no good thing for Cheltenham Now is the perfect time to get on classy type at 16-1 for the Albert Bartlett Kelly Morgan back in form after brief hiatus from the sport Harry Findlay: 'It was, and always will be, the easiest £33,000 I've ever won' Peter Scudamore: 'I'd have loved to continue riding but we weren't earning'