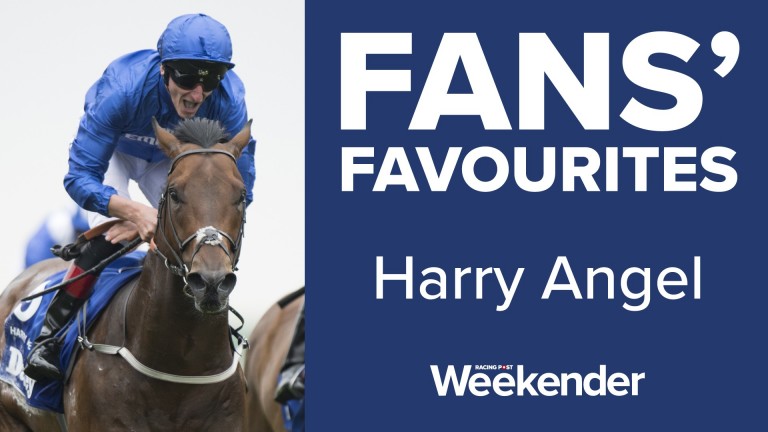 Sprint racing is renowned for its colourful characters and storylines, and there have been few as exciting and had as many talking points over the years as Harry Angel.

A dual Group 1 winner, Harry Angel is as fondly remembered for his blistering speed as his Ascot hoodoo, but few can deny the serious talent the horse possessed on the racecourse and the general desire of racing fans to see him do well.

That came to a climax during the now stallion’s three-year-old campaign when he landed the July Cup in 2017 for Clive Cox and Adam Kirby. 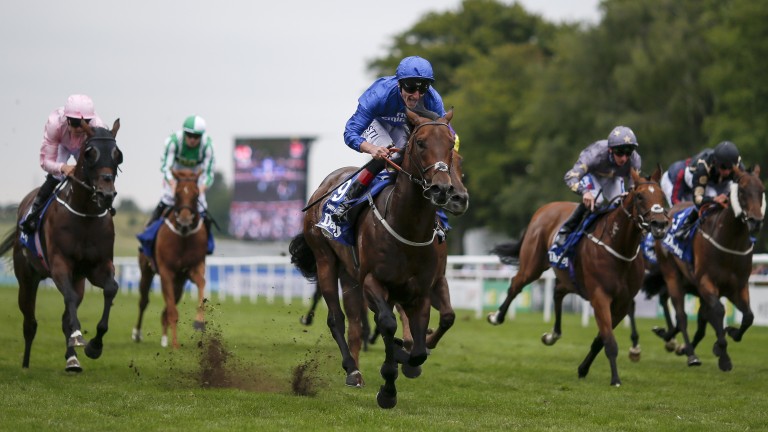 Harry Angel had knocked on the door of top-level success the previous month when he was second to Caravaggio in the Commonwealth Cup, but Cox believes that race was the turning point when he knew his boy was destined for greatness.

Cox recalls: “He was still progressing and learning his trade in the absolute hottest company, and he ran a real blinder against the likes of Caravaggio and Blue Point but was just a bit fresh early on.

“As he came off the track after that race he almost looked at me and said, ‘All right guys, I’ve got it now,’ and for me that was the big moment.”

What came next was a truly awesome performance on Newmarket’s July course, where Harry Angel hit the gas pedal over a furlong out and was not for catching, beating runner-up Limato by a length and a quarter. Commonwealth Cup rival Caravaggio finished fourth.

The sharper six furlongs at horseracing’s HQ proved exactly what the doctor ordered, much to Cox’s delight, who enjoyed his second victory in the race after Lethal Force ran them ragged in 2013.

“The July Cup was undoubtedly a very confident performance and it was the pinnacle where everything he’d been doing came together,” says Cox. 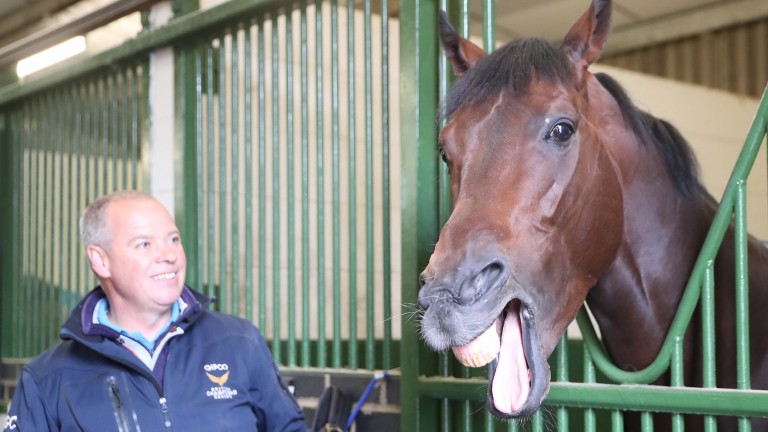 “Winning that July Cup was awesome. It was a real buzz breaking the track record with Lethal Force, but Harry following up and winning it as he did was a really special feeling and I’m so proud of him.”

That he was able to secure such a hot commodity for such a modest sum in the grand scheme of things no doubt added further enjoyment to that Newmarket success.

Cox says: “From the minute I first saw him he had a lot of quality and class about him. I trained his brother, Golden Journey, who was a winner for us but only at a moderate level.

“He was by Dark Angel who had already served us well with Lethal Force, and Harry had such a good, strong, proper model that I was very pleased to buy him for what was a very sensible price on the day.” 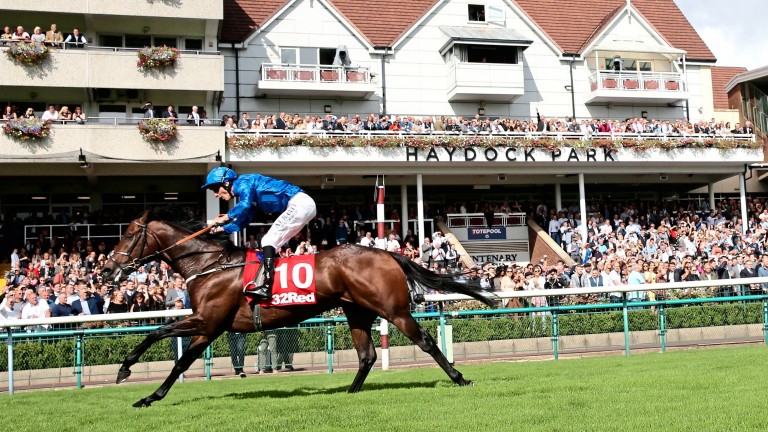 Things did not go completely to plan on debut for Harry Angel as he was denied by a nose at Ascot, the start of what was to be a very tough relationship with the Berkshire track.

“If he’d broken his maiden there it might have spoiled a few journalists’ stories going on that he didn’t like Ascot!” laughs Cox. “But it was a very pleasing performance and he did everything right bar win.”

From there Harry Angel went south for Glorious Goodwood but was unable to run after rearing up in the stalls – another issue that was going to cause a few more headaches for Cox down the road.
But he had no such problem when heading to Newbury, where he justified punters’ faith and landed the Mill Reef on his second and final start as a juvenile.

Following a fruitful winter in which Cox notes he was “an absolute pleasure to deal with”, Harry Angel got his three-year-old campaign under way back at Ascot, where he once again had to make do with finishing second – this time to Blue Point in the Pavilion Stakes.

From there however he bounced back in style, breaking the course record at Haydock on his way to success in the Sandy Lane on very quick ground. Perhaps even more impressive was his return to the Merseyside track just four months later, fresh from his July Cup success, when he won the Sprint Cup on bottomless ground. 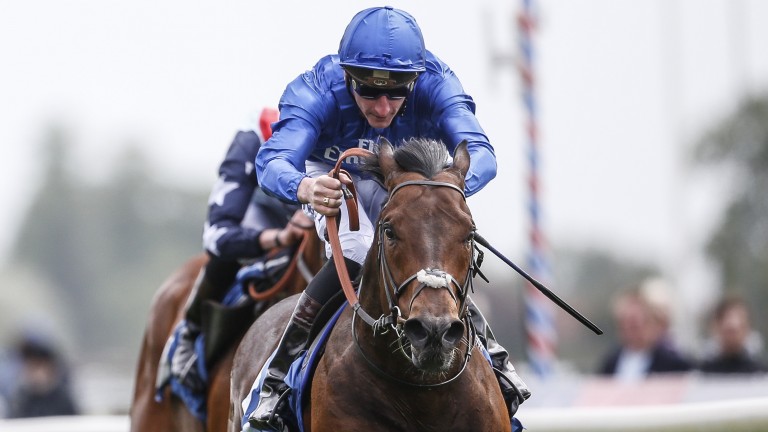 Cox recalls: “His Sandy Lane win was a breathtaking performance, but to then carry on from that on a completely different surface was unreal. He’d never run on anything as soft as the Haydock Sprint and it was a very difficult situation.

“I remember running Lethal Force in the same race on tough ground and I felt so helpless when he just couldn’t go on it. To watch that was not a nice feeling so it was very concerning when we ran Harry there, and there was a lot of deliberation and concern. But he showed a real quality of versatility and settled beautifully that day, and quickened up really well to win his second Group 1.”

However, for all his versatility at Haydock, Harry Angel could never quite crack Ascot.

He finished fourth in the Champions Sprint to close out what had been a fantastic three-year-old season, but simultaneously saw his record at the Berkshire track fall to 0-4.

The next season he made a winning return in the Clipper Logistics at York before having his sights set on the Diamond Jubilee at Royal Ascot, when things took a turn for the worse.

Throughout his career, Harry Angel had a testing relationship with stalls, dating back to the aforementioned Goodwood incident as a juvenile. This was to go one step further however, as he reared up in the stalls and got his left leg trapped over the running board.
He was a beaten horse as soon as the stalls opened, and finished 11th.

“That Diamond Jubilee incident was truly disappointing because I think he was in the form of his life going there, and it was just a dreadful shame,” says Cox.

“As we know the stalls had been a snag with him all along and it was sad he couldn’t show his true worth.

“We were always working on the stalls throughout his career, he just had that little bit of anxiety and with a sprinter it’s difficult to contain because of the explosive nature of what you’re trying to achieve.”

That was to be the beginning of the end for Harry Angel’s racing career, as he came sixth in the Haydock Sprint Cup next time, once again getting upset in the stalls. 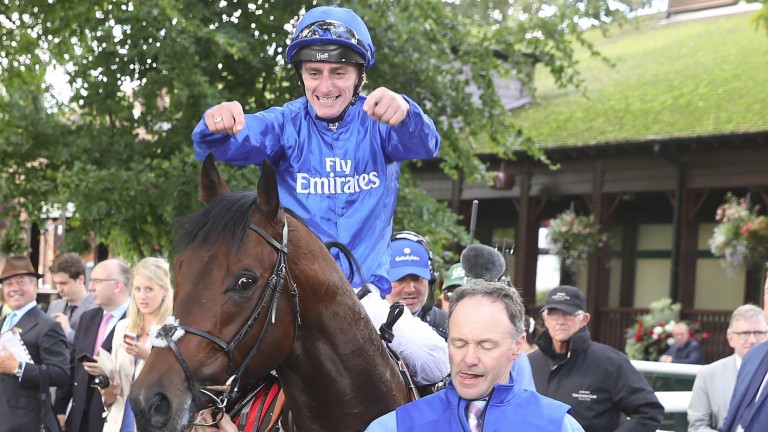 He finished second to Sands Of Mali in his final run in the Champions Sprint at Ascot, and although it was not the winning farewell many would have liked to see, nor was he able to break the Ascot curse, it was another performance Cox was proud of.

Two years on, Harry Angel can be found at Dalham Hall Stud where he is helping to bring through the next generation of sprinting superstars.

“I’m pleased to say I’ve seen a few of his foals and they look extremely exciting and precocious individuals,” says Cox. “He’s definitely a horse I hope and pray he makes as a stallion because he was so talented himself and blessed with so much ability. If he can pass that through to the next generation it would be marvellous.”

FIRST PUBLISHED 10:00AM, JUL 9 2020
His Sandy Lane win was a breathtaking performance, but to then carry on from that on a completely different surface was unreal

'Breathtaking' Supremacy in the mix for Morny as Cox eyes Group 1 prizes Caspian Prince: an evergreen sprinter who is showing no signs of slowing down Borderlescott: the much-loved little sprint wonder with the huge heart