Copper Knight: 'It's ridiculous now looking back how he went for that price' 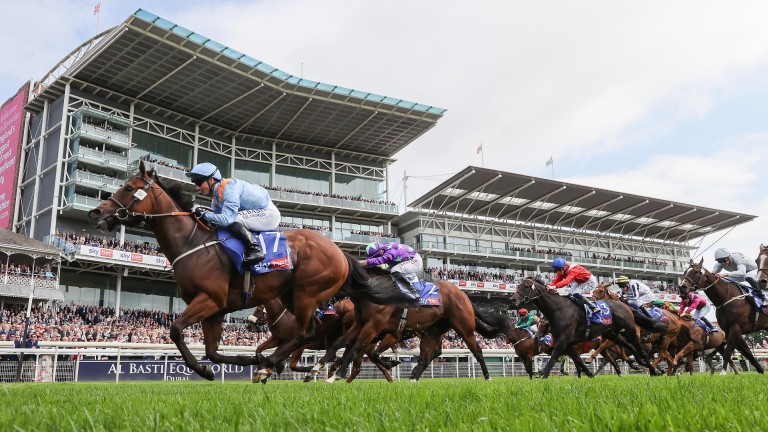 Fans' Favourites is a weekly feature in the Racing Post Weekender in which we talk to those closest to racing's most popular horses and find out why they tug on our heartstrings. This week's subject: Copper Knight

A select few horses have a race named after them. Even fewer while they’re still racing. Copper Knight, though, is not your average horse.

The ever-dependable sprint handicapper has been one of the unsung heroes of the Flat season, maintaining his form from spring through to autumn. He might be seven years old but he’s been better than ever this year, as he showed when galloping into the annals of York’s rich history at the Ebor meeting in August.

Copper Knight, who has taken three generations of a Halifax family on a remarkable ride, kicked off the north’s showpiece Flat meeting in fine style when winning on the Knavesmire for the sixth time.

Two days later, Stradivarius brought down the house at York when edging an epic duel with Spanish Mission for the Lonsdale Cup, but not even the supreme stayer can match the achievements of Copper Knight.

When the Tim Easterby-trained son of Sir Prancealot scorched to an all-the-way success in the 5½f handicap, he set a modern-day record for the most number of wins by a horse at York.

His total of six is one more than Stradivarius. One more than fellow sprinter Dakota Gold. And one more than the aptly named Yorkshireman, who gained five wins in the late 1960s.

It is not just the locals who love Copper Knight, but nowhere will you find a deeper affection for him than the home of the Denham family in the Yorkshire town of Halifax. 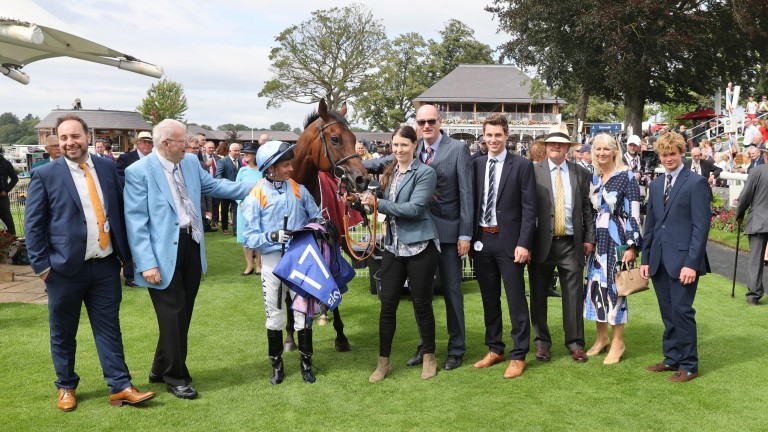 Tony Denham, who works as an insolvency practitioner, his father Keith and son Tom have been there for the majority of Copper Knight’s journey, each taking particular satisfaction from the sprinter’s affinity with York.

So much so the part-owners have decided to honour their star performer by sponsoring the 5f handicap at York on Friday under the name, the Copper Knight Winning Most Horse at York Handicap Stakes.

It will be the latest chapter in a fairytale story for the Denhams with a horse bought at the sales after his juvenile campaign with Hugo Palmer for a mere 5,000gns.

“We’d followed Copper from his debut run at Newmarket for Hugo Palmer, but forgot about him over the winter, as you do, and it was only heading to Ripon in the car on the day he made his debut for Tim that we spotted him on the racecard,” says Tom Denham.

“It’s ridiculous now looking back, how he went through the sales for that price. He’s always been a small horse and maybe people thought he’d only be a two-year-old. He ran well in second in Tim’s ownership that day at Ripon and we left having been sold a share.

“He’s raced in a few different colours through different associations over the years, but my grandad and dad have always been involved, and it’s been a mad ride ever since.”

In his two-year-old season, Copper Knight got off the mark in the Lily Agnes at Chester on his third start, but lost his way upped in grade afterwards and was subsequently gelded.

For his first race for his new owners, Copper Knight went back to Chester for the May meeting, where he made an instant impact.

“We knew he liked it round Chester but the performance was unbelievable really as he won so well,” recalls Denham. “Then a couple of weeks later at the Dante meeting he won again, and that’s where his love affair with York started.

“We were on holiday and watched the race on our phones, but you couldn’t see anything because it was tipping it down with rain. We could hardly make it out, but it turned out we had a one-two as we also owned the runner-up Rasheeq.” 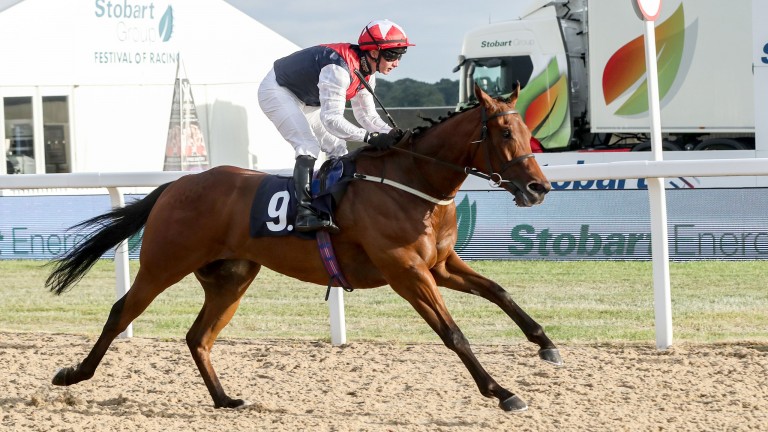 Copper Knight wins at Newcastle in his other colours
John Grossick (racingpost.com/photos)

There have been many other great days at York with Copper Knight, including winning the Listed City Walls Stakes in 2019, the pick of his ten career victories in terms of grade.

“We never dreamed of him running in those types of races and it was nice to win a Listed race a couple of years later,” says Denham. “He’s as hard as nails and dances every dance. Last year, he had a bit of an off year after picking up a few knocks and we thought time was catching up with him. But this year, he’s put that all behind him and been fabulous again. We had started to think he might have fallen out of love with the game, but he’s shown all his old enthusiasm.”

Following a winless 2020, Copper Knight’s handicap mark dropped to 85 – from a peak 106 the year before – and he capitalised on his reduced rating to win again at the Dante meeting in May.

Three months later he returned to York for the Ebor meeting and recorded an historic sixth course success in the Sky Bet and Symphony Group Handicap in trademark trailblazing style at odds of 18-1.

“He’d won at York earlier in the year and we knew he was one away from the record,” says Denham. “It was hard to be confident about his chances and it was a real surprise. That was a major highlight for us. We’re proud Yorkshiremen and like all the county’s courses, but York holds a special place in our hearts. For him to develop a love affair with the place is a dream. He’s taken us to all the big meetings there every year.”

Easterby went on to win the Nunthorpe at the Ebor meeting with Winter Power, but Copper Knight’s victory meant a lot to him as well. 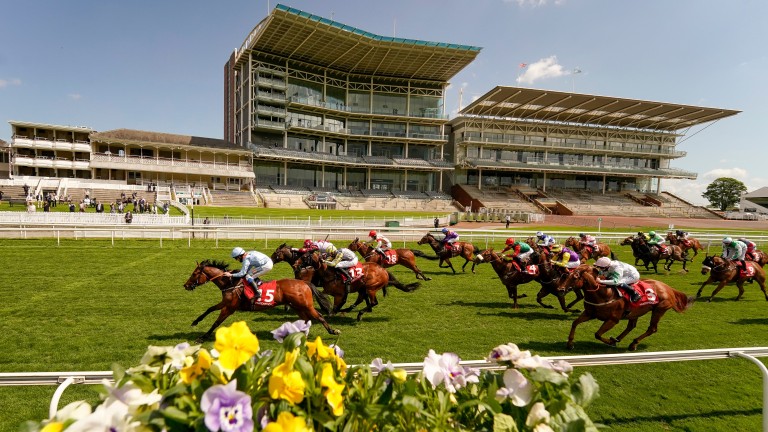 Bought by his son William for that bargain sum back in 2016, it’s no wonder the trainer described the pocket-rocket sprinter as “just a super horse” after he won for the yard for the ninth time in total.

“Bringing up the record at York was great,” says the trainer. “Wherever we run him, he always tries his best. He’s game as a pebble and really rock-solid.

“William bought him for five grand, so I think people were thinking he couldn’t be any good. A few people had a chance to buy him when we first got him, but he was like a little, woolly teddy bear.

“He was quite keen when he first arrived and Rachel Richardson used to ride him out and look after him, but he’s a decent ride now and there’s a good team looking after him. He’s a grand horse at home, you wouldn’t know you had him. He’s been tremendous for everybody.”

Denham gets the chance to see his pride and joy most days as he works at Easterby’s Habton Grange stable and he enjoyed another grand day out at York on Friday when a race was run in Copper Knight's name.

He says: “Who knows how long he’ll go on for – we don’t want to take anything for granted – and we’re happy to keep him going for as long as he tells us he wants to race on.”

Special is a word that sums up Copper Knight perfectly. He seems to be in a big sprint handicap every couple of weeks and always runs his race. He may not have won at Group level, but it doesn’t matter. Punters love the type of races he runs in and they love a horse that gives their all.

“Sometimes being an owner, you don’t quite realise how popular these horses can be,” Denham says. “At last month’s Malton open day it was great to see all the people coming into the yard and wanting to see Copper and give him a pat.

“They were taking photos and telling stories about where they were when he’d won. It really hit home how special he is – he’s a horse of a lifetime.”

Lady Bowthorpe: 'Even on Newmarket Heath, people know who she is'

Quiet Reflection: 'It poured down but we didn't care as she destroyed them'

Alpha Delphini: 'I asked them to stick me 50 quid each-way on that morning

Canford Cliffs: 'He was one of the best racehorses in the last 50 years'

Taghrooda: 'She turned towards the stands and everyone was going absolutely mad'

Kingman: 'There are some in the camp who think he'd have beaten Frankel'

Tropics: 'I saw something that day I hadn't seen much – he worked like a train'

FIRST PUBLISHED 11:00AM, OCT 10 2021
For him to develop a love affair with York is a dream. He’s taken us to all the big meetings there every year

Foul weather and a right couple of turn-ups, what more could jumps fans ask for? Champion Hurdle alert: amazing Honeysuckle 'could still be improving' The plot against gambling: how a powerful lobby is out to change betting forever Denman: 'He could pick you up and chuck you out the box or take your arm off' 'It can transform kids' lives' - the charity inspiring children through horses Likely weekend winner looks the one to beat for Cheltenham target at 9-2