Borderlescott: the much-loved little sprint wonder with the huge heart

Nick Pulford talks to the connections of the dual Nunthorpe winner 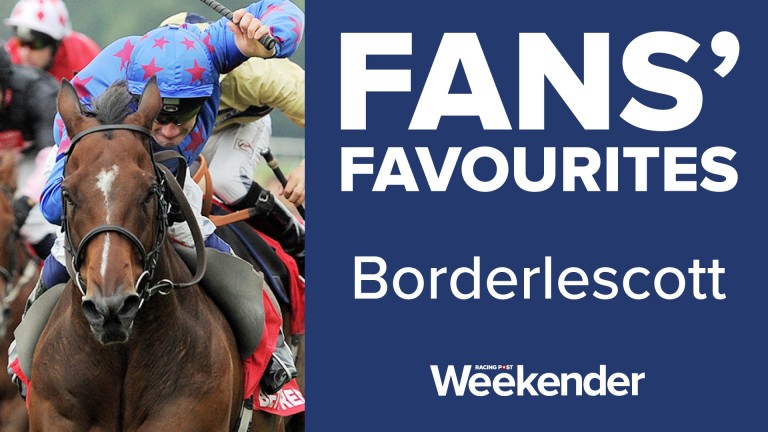 The horse of a lifetime is a much-used phrase but never more apt than in the case of Borderlescott, the little wonder sprinter with the big heart.

In his incredible journey from handicaps to Group 1s, he was easily the best horse trained at Robin Bastiman’s small Yorkshire stable and the only luminary to carry the blue with red stars of proud Scots Jim Edgar and Les Donaldson, his committed yet humble owners.

This cross-border union started with mere hopes of winning a race with the 13,000gns yearling purchase but Borderlescott took them all to the winner’s enclosures at the great summer festivals of York, Newmarket and Goodwood and on memorable trips to Paris and Hong Kong.

His initial handicap mark was a modest 64 but he climbed the ranks so rapidly that he won the 2006 Stewards’ Cup at Goodwood off a mark of 102. He carried 9st 5lb that day, a testing burden considering he measures a mere 15hh, and just as remarkably he almost followed up the following year when he was beaten a short head by Zidane under 9st 9lb.

Then he made the jump to Group 1 company to win the Nunthorpe Stakes when it was transferred to Newmarket in 2008, setting a record time for five furlongs on the July course, and completed a famous double when the race was back on familiar turf at York 12 months later. 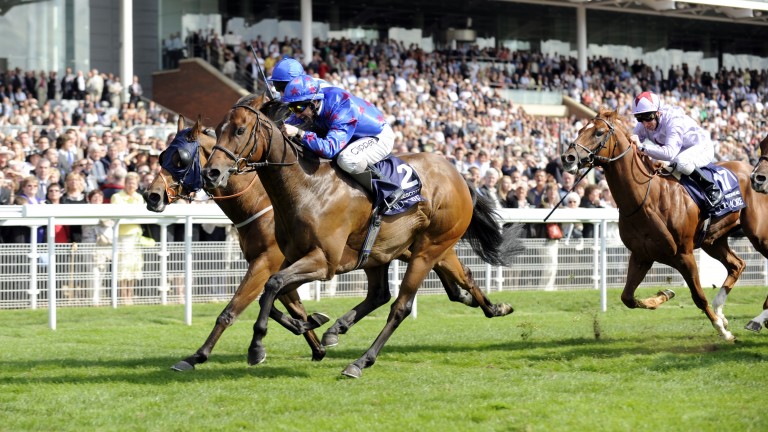 For all his stirring triumphs, he remained the eternal underdog with an army of fans rooting for him. With his fighting spirit, numerous near-misses and unheralded connections, he is undoubtedly one of the most popular horses of the past 20 years.

The affection for him knows no bounds at the family yard near Wetherby where Rebecca Bastiman, assisted by brother Harvey, took over the training licence from her father five years ago and where Borderlescott, now 18, still has pride of place in the same box he occupied in his racing days. It will be his home for life.

“To us he’s not really been a racehorse, he’s been more like a family pet. All the family’s been involved with him,” says Rebecca, who used to ride him in his work at home. “He’s just turned out now. He goes out with the rest of the horses and he’s got a life of luxury really. He’s really well and happy, and he gets so much fuss all the time. He loves the attention.” 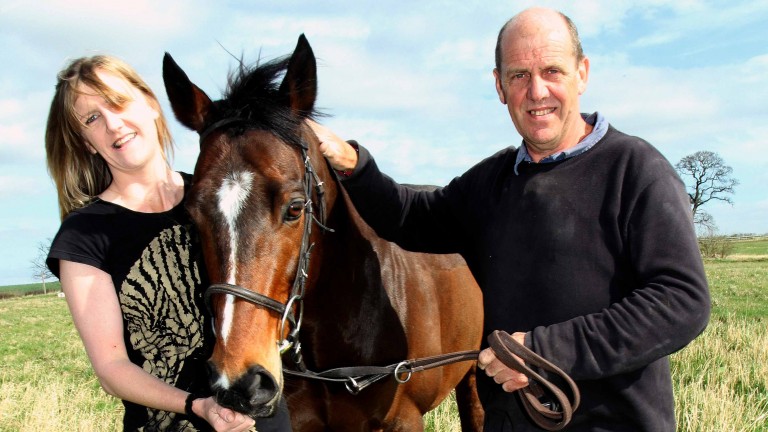 In his younger days, Borderlescott was much more of a handful, as Donaldson recalls. “We had a horse called Sennen Cove with Robin, who phoned Jim one day and said he had a two-year-old for sale if we wanted to come down and have a look. Well, the first thing the horse did was head-butt Jim. Robin and the whole family just looked and thought ‘Oh God, that’s it, they won’t buy him now’. But Jim and I had a wee discussion and we said we’d take the horse.”

Borderlescott showed glimpses of his latent talent but early in his three-year-old season came the near inevitable decision to have him gelded. “He was going daft in the yard and at the races,” says Donaldson, “and we decided that would be the best course of action.”

Any stud value was lost but Borderlescott earned almost £800,000 in prize-money in an 85-race career that yielded 14 wins, which also included the Group 2 King George Stakes at Goodwood, one of his happy hunting grounds.

“It was after his Stewards’ Cup that we realised how popular he was,” says Donaldson. “The applause that day at Goodwood was phenomenal. His ears went back and his head was up and he trotted in like a superstar. The support he had was amazing and people were sending letters to the yard when he won races and cards and presents on his birthday.” 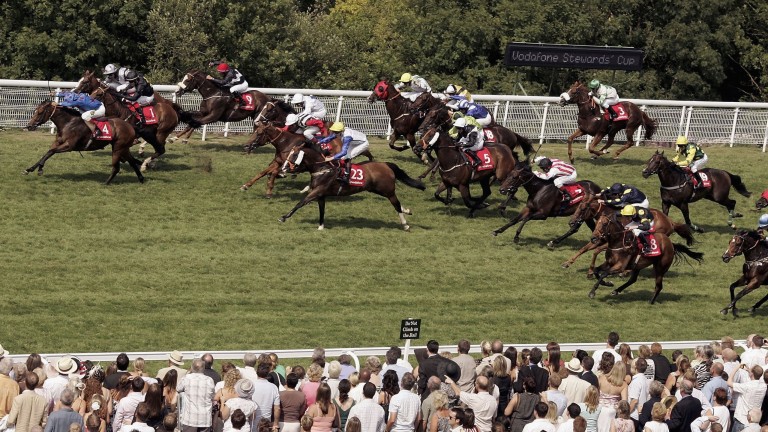 Along with the wins, Borderlescott also recorded 20 second places and ten thirds, with nine of the defeats by no more than a neck. Among the ones that got away were the 2006 Ayr Gold Cup when he was beaten by Fonthill Road, who challenged out of his sight on the far side, and an unlucky-in-running effort in the 2009 Prix de l’Abbaye.

“He was the type who could get beat in a moderate race but still be able to win a Group race,” says Robin Bastiman. “He’d travel so well and then hit the front and think he’d done it. Once he got his head in front, he’d stop.”

It wasn’t through any lack of genuineness. “The great thing about Borderlescott was that he did his best at all times but he was such a funny devil,” says Donaldson. “He was a fighter, he wanted to do well in every race, and he sulked if he was beat.” 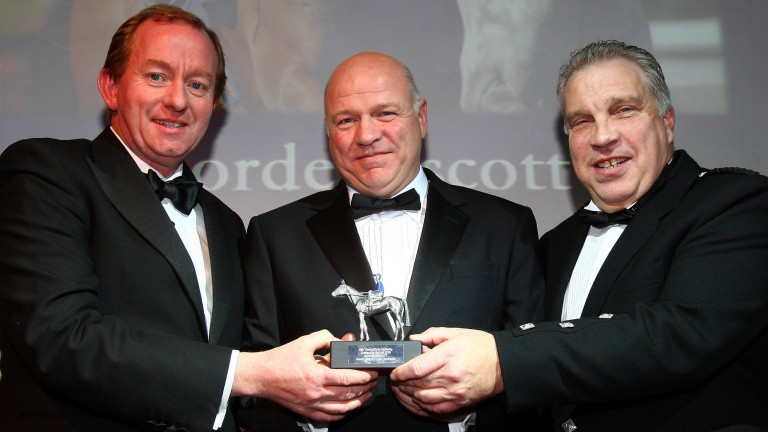 Injury compromised his chance of a third consecutive Nunthorpe in 2010, when he was sixth, and he won only once after that despite racing on for another five years until the age of 13. Despite the odd what-might-have-been moment, his connections look back in wonderment at what he did for them.

“What a fantastic horse to have. We had just a wonderful time,” says Donaldson. And so say all of us.

Among the many strands of the Borderlescott story, two of the strongest are love and loyalty.

The 18-year-old will never leave the yard where he has been since he was a yearling and there was never any danger of his owners taking him away during his racing career, even though temptation was put in their path.

“A number of people wanted to buy Borderlescott and some people asked why we didn’t send him to a bigger stable, but it was wonderful for us to see such a hard-working family have a good horse like that,” says Les Donaldson, who owned him with Jim Edgar.

“We have a lot to thank the Bastiman family for. For a yard with 20 horses to win two Group 1s was just incredible. They did so much for us. We’re so proud of the Bastiman family and the way they looked after the horse, and still do to this day. Rebecca just loves him.”

Having ridden him at home throughout his career and trained him in his final season, Rebecca Bastiman counts herself as Borderlescott’s number one fan. “He’s just been an amazing horse to have and he took us on some journey. He’s so special, he’s a diamond,” she says. 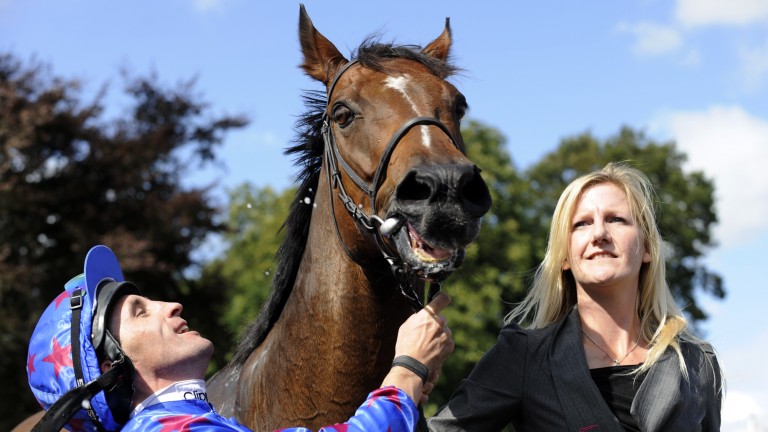 “I get so emotional talking about him because he’s such a nice horse and to have all the memories with him is incredible. We’ve got pictures everywhere, paintings, chalk drawings, and photos of almost every race he won.”

Asked for her favourite moments from so many racecourse highlights, she says: “It’s got to be when he won his Group 1s. It was an amazing day at Newmarket and obviously on our home turf at York the whole crowd was behind him that day. That was a real special moment.”

Donaldson also cherishes that second Nunthorpe victory when Borderlescott raised the roof with a stirring finish to snatch victory by a neck from front-running Benbaun. “To win at Robin’s home track was fantastic,” he says. “One of my friends said in all the years he’d been going to York he’d never heard applause like it in the winner’s enclosure. The experience was wonderful.”

Borderlescott’s final victory fittingly came in Yorkshire in the 2012 Beverley Bullet with Freddy Tylicki in the saddle, becoming the eighth jockey to win on him. “The reception he got there, you’d have thought he was Sea The Stars,” says Donaldson with pride.

Robin Bastiman appreciates the faith the owners put in him throughout Borderlescott’s career. “The owners have been really loyal. They could easily have sent him to a more high-profile trainer but if you haven’t got loyalty in this game, you’ve got nothing,” he says.

The Borderlescott colours are still in the yard with Royal Brave, an eight-time winner for the partnership, and Donaldson also has Milton Road running in his own name. None of them, however, will have another like Borderlescott.

Robin Bastiman, who found his shining star almost 40 years into a training career that mostly bumped along the bottom, had a favourite joke when people asked after Borderlescott during his racing days. “They’d ask, ‘How’s your good horse?’ and I’d say ‘Which one?’ I’ve been at this game a long time and getting a horse like him made it all worthwhile.”

Even in retirement, Borderlescott still brings joy to the family who raised him to incredible heights. “When the horses are turned out together you see them all running across the field and he’s normally up there at the front,” says Rebecca.

“It’s great to have him to this day and to watch him in the field still loving life.”

Caspian Prince: an evergreen sprinter who is showing no signs of slowing down