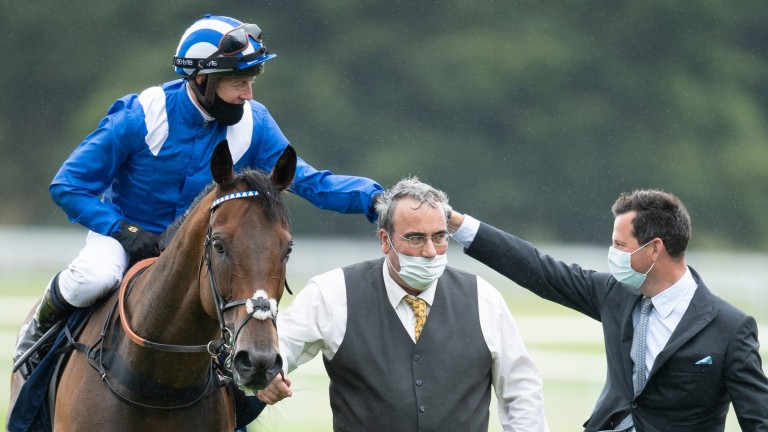 When Battaash is in full flow no horse can get near him. While stayers are defined by stamina, and tactical pace is such a defining factor in mile and middle- distance races, in the five-furlong sprints having that turbo-like raw speed is pretty much all you need. That is exactly what makes Sheikh Hamdan Al Maktoum’s charge so untouchable.

So what is the secret to Battaash’s speed, which reached a mesmerising 48.63mph at Goodwood last year?

Trainer Charlie Hills says: “When you look at sprinters they’re often big imposing types, but he’s not like that at all. I think he’s just so quick on his feet, his athleticism is amazing and his joints are so flexible. He’s quite special in that regard.” 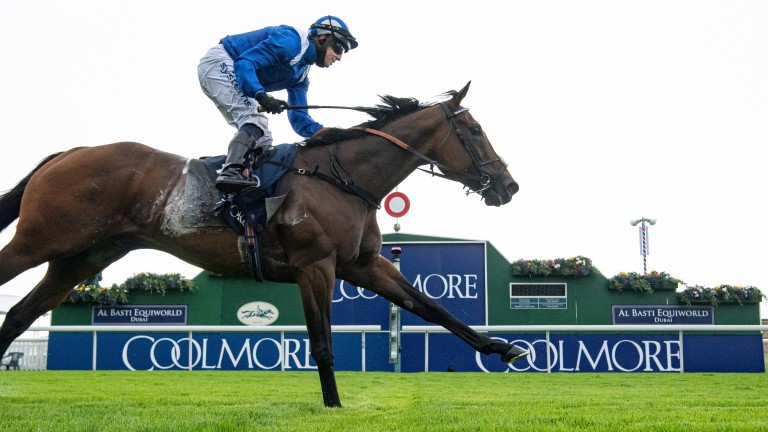 While speed is crucial, it is understanding racing and the job in hand that separates the good from the greats. Battaash, although an impressive winner on debut, only really flourished as a three-year-old.

Hills adds: “He’s always been very athletic. From the early days he was full of it and had lots of energy – not always focused on the right things though – but you could see that he was a very well-put-together horse. I trained the mare [Anna Law] and she was very fast, a bit too fast really – she’d need four furlong races.

Behind the scenes, his groom Bob Grace has been keeping the sprinter happy and the gelding operation is one of the key factors in Battaash’s rise to fame.

“I’ve looked after him since the very first day he came,” says Grace. “He was quite an interesting character as a baby but, then when he was gelded, he started to look a bit special as a three-year-old. The gelding changed because when he had his balls he could be a right bastard. It’s a good thing I suppose otherwise we wouldn’t have had him for so long.”

And it was on the gallops where Battaash’s talent begun to shine, making Cotai Glory – the previous year’s King’s Stand Stakes runner-up – look ordinary ahead of his three-year-old
campaign.

Grace adds: “I remember thinking when he came back in as a three-year-old thinking there must be something wrong with Cotai Glory because Battaash has worked all over him – that’s quite a famous line now when you look back. We now know that wasn’t the case.

“You never really know if a horse is going to reach that sort of top level though, you just hope they do. It’s a bit like supporting a bad football team, which is Bristol Rovers in my case.” 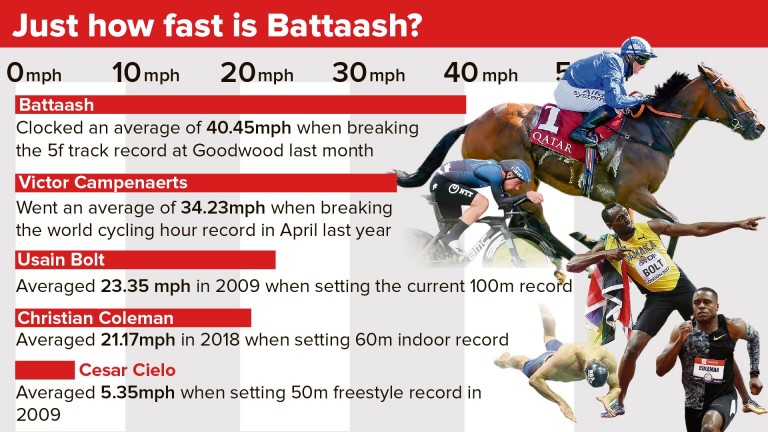 Hills adds of his explosive homework: “He came back quite late but his work had been different class. He’d gone up a level or two and making our top sprinters look like they were milers.”

And the son of Dark Angel soon showed his talent on the track, starting off at Listed level in the Scurry Stakes, then the Group 3 Coral Charge before a demolition in Glorious Goodwood’s King George – a race he would then become synonymous with.

His trainer reflects: “He had two bad draws at Sandown but still won and then Goodwood. The track seems to really suit him, it really plays to advantages. Mid-race is where he really gets horses out of their comfort zone and he can get them all at sea there – it’s about getting his sections right but he gets the five really well and sustains that gallop.”

But Battaash’s rise through the ranks would be halted in the Nunthorpe, running a flat fourth and beaten even by stablemate Cotai Glory. Marsha would win the race in 2017, famed for Frankie Dettori’s post-line celebration, only to lose in the photo-finish.

However what makes Battaash such a special and popular sprinter is his ability to roar back, best highlighted by his unforgettable Prix de l’Abbaye victory. On just his second start at the top table he routed the very best, showing a devastating turn of foot in a four-length win over Marsha.

A proud Grace reflects: “It was a real, real buzz that day, I think we were all quite emotional on the day. It was a proper day, a proper race and with proper horses, so to run like that and beat them like he did is very special. But every year he’s seemed to have one really big run, and as a three-year-old that was the one.”

In the next two seasons Battaash would claim enigma status, unbeatable at his best but all too often underperforming. In 2018 his second King George at Goodwood was electric, but it was a year where he failed to win at the top level. Blue Point proved too good at Ascot, there was another underwhelming performance at York and ground conditions went against him in France.

The following year was similar, again second to Blue Point but ace at Goodwood. There was one key difference, however: this time he had his day of glory at York and his best performance to date with a domination from the front to silence his doubters.

“He’s had excuses when he’s been beaten but at the end of the day nobody’s perfect,” Grace says. “He’s had ground go against him at Longchamp and such but people seem to knock him for being beaten a length and a half in a Group 1 race. People also mention Blue Point but he was a very very good horse.

This year, at the age of six, Battaash has been flawless. Perhaps helped by no Blue Point, perhaps too without the distraction of crowds, but in all truth he’s just proved too good.

He finally landed the King’s Stand – making him the first since Lochsong to complete the European five-furlong Group 1 treble. At Goodwood more history came, with Battaash landing the King George in record time and becoming the first to win the Group 2 four times.

This year nobody can criticise him, and at home he has developed from that feisty baby to a kind – but electric when he needs to be – veteran who the racing public have adored watching in the last few years.

“There aren’t too many sprinters like him,” says Hills. “He’s got professional now and he knows he’s good. I suppose maybe no crowds has helped him a bit but I wouldn’t read into that too much. You can throw most things at him now, he’s pretty resilient.

“He likes his routine, he’s an intelligent horse and doesn’t miss a trick. He likes going out first thing, he wants to be the first out the stable door. Bob and him get on so well and Victoria, who rides him in his work. When he goes off to Shadwell he’s treated like royalty so he’s got a great team around him.

“The public seemed to have got hold of him now too, which is great. He’s got blistering speed which everyone can see and it’s incredible to watch.”

Grace says of his pride and joy: “He’s a lovely character and I’ll always have people coming up wanting to see him. If you give him a carrot then he’s happy. But he won’t eat expensive carrots, we gave him Waitrose organic carrots and he wasn’t happy, he prefers the cheaper ones from Tesco. He likes the cheap stuff!

“Every time we go racing with him loads of people come down to his box wanting to give him a pat and he loves the attention. He could stand there all day.”

FIRST PUBLISHED 10:00AM, SEP 23 2020
We gave him Waitrose organic carrots and he wasn’t happy, he prefers the cheaper ones from Tesco

Charlie Hills confirms Battaash will not go to the Breeders' Cup Roaring Lion: the dazzling champion with the courage to match his speed A Flat season that's been anything but flat - and there's still loads to relish