Inside track on the Bowl as Clan Des Obeaux, Kemboy and Bristol De Mai face off 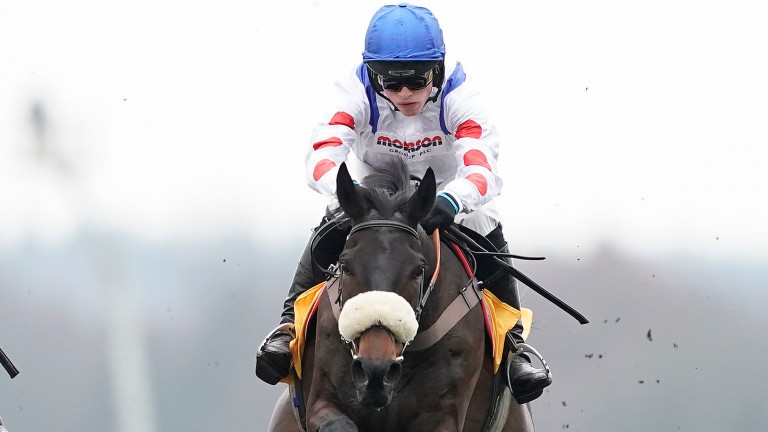 His bubble may have burst at Cheltenham but it would be a brave or foolish person who dismissesthe chances of Clan Des Obeaux based on that one run.

After all,he has yet to win in five visits to Cheltenham and does not appear to relish that gruelling final climb to the line.

This race always provides more of a speed test on a flat track, and Clan Des Obeaux could be in his element.

Prior to finishing fifth to Al Boum Photo in the Gold Cup, Clan Des Obeaux had taken the leap from a highly promising chaser to Grade 1 winner, his victory over Thistlecrack in the King George on Boxing Day heralding his arrival in the big time.

It’s hard to forget he was still hard on the bridle at the final fence that day, and he clearly possesses a serious amount of class.

Trainer Paul Nicholls said: “He ran well in the Gold Cup, but probably didn’t quite last home in the testing conditions. The track, better ground and shorter trip should suit.”

Wherever he finishes in the Bowl, Clan Des Obeaux is still only a seven-year-old, and his future remains very bright.

ProsHas improved significantly since last season, and this flat track is likely to play to his strengths

Despite two memorable victories in the Grade 1 Betfair Chase– including when destroying Cue Card by 57 lengths in 2017– Bristol De Mai continues to be underrated and arguably under-appreciated whenever he ventures away from his beloved Haydock.

Sent off at 18-1 in the Gold Cup, the Nigel Twiston-Davies-trained grey briefly looked like winning at the second-last before his run flattened out.

He nonetheless finished an honourable third, with the likes of shorter-priced Native River, Clan Des Obeaux and Presenting Percy behind. 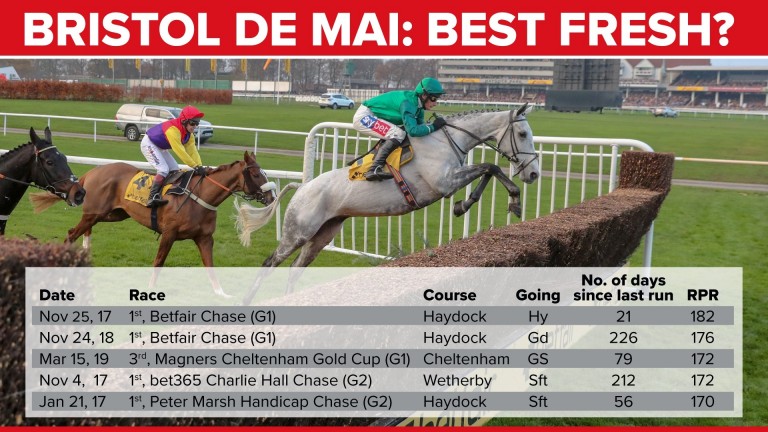 Connections had seriously toyed with a tilt at Saturday’s Grand National off top weight, but feel this race represents a great opportunity of getting him back into the winner’s enclosure.

Twiston-Davies said: “The horse’s actions speak louder than words. Everyone tells me he doesn’t like these courses– we’ll see.

“He seems to have come out of Cheltenham in great shape, but you can never really tell until you run them.”

ConsWe’ve been down this roadseveral times, but surely he’s at his most dominant at Haydock?

Kemboy out for compensation

Who knows how Kemboy would have fared in the Cheltenham Gold Cup, but could his early exit be a blessing in disguise and give him an edge at Aintree?

Bristol De Mai (third), Clan Des Obeaux (fifth) and Elegant Escape (sixth) were all involved in the bruising battle at the business end, while Road To Respect (third) and Balko Des Flos (seventh) gave all in the Ryanair Chase.

Kemboy is certainly the freshest of the sextet, and Willie Mullins thinks that could be crucial.

The trainersaid: "He was fine after his early exit from the Gold Cup. He's in good form. The drying ground will suit and he should be relatively fresh compared to his rivals."

Ruby Walsh, who has not ridden Kemboy since he won a maiden hurdle at Limerick in 2016,thinks the same and believes the seven-year-old is an improving individual.

"His form heading into Cheltenham was rock solid," he said in his column for Racing TV. "He was very good in the Savills Chase at Leopardstown over Christmas and also won the Clonmel Oil Chase before that; he’s an improving horse.

"I'm not sure if he stumbled or knuckled on landing when he fell at the first in the Gold Cup as it's hard to see on the replay.

"He's come out of Cheltenham well, he’s fresh and seems to be in great order. He didn’t have the race at Cheltenham that Bristol De Mai and Clan Des Obeaux had."

ProsHe's still only seven, is relatively unexposed over three miles, and his early departure in the Gold Cup means he arrives here fresh

You could say Road To Respect is at a crossroads. Is he an out-an-out stayer or is he best over two and a half miles? This might tell us the truth.

Noel Meade's decision to take the Ryanair flight rather than wait 24 hours for the Gold Cup looked like it might pay off coming down to the third-last at Cheltenham as Sean Flanagan was yet to move a muscle. 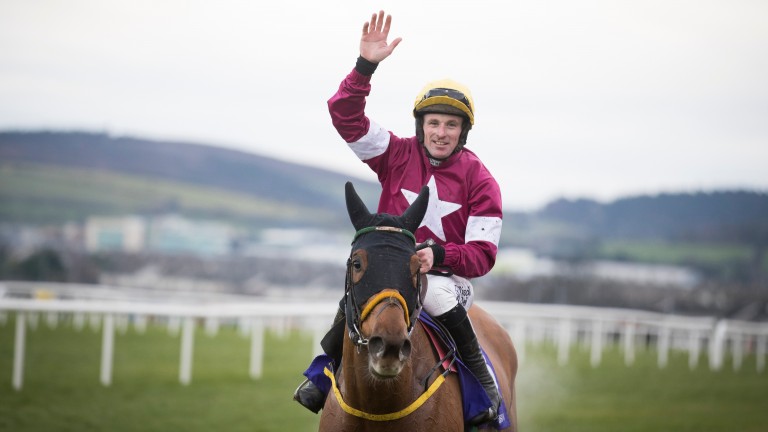 A shuddering error there allowed Frodon and Aso to get first run and he was unable to reel in the pair. It was, nonetheless, another solid effort from a solid performer.

Meade is hoping the fact that Road To Respect did not have a gruelling race over much further in the Gold Cup might benefit him at Aintree.

"They tell me he's in fantastic form over there and he travelled over great," said the trainer.

"He came out of the Ryanair in great nick. He wasn't exhausted afterwards, he might have been if he'd run in the Gold Cup.

"You'd like to think that the track would suit and we're hoping for a big run."

ConsCould not live with Kemboy in the Savills Chase at Leopardstown over Christmas, albeit unlucky in running, and has a habit of finding one too good

Elegant Escape has made giant strides this season, winning the Welsh Grand National and finishing runner-up to Frodon in the Grade 2 Cotswold Chase.

He didn’t reach that level whensixth in the Gold Cup, but Colin Tizzard sees no reason why the seven-year-old should not have another crack at a couple of those who finished in front of him at Cheltenham.

“He finished sixth in the Gold Cup and wasn’t too far behind Clan Des Obeaux,” reasoned the trainer.

“He’s got to find a bit, but he’s come in his coat now, and there’s lots to like. He’s progressed well this season.”

Balko Des Flos, winner of last year's Ryanair Chase, has yet to scale the same heights this season and could finish only seventh to Frodon in the Cheltenham Grade 1 last month.

He will start the outsider of the six runners, but shocks results at this meeting are by no means uncommon, including Follow The Plan, who landed this race at 50-1 in 2012.

Eddie O'Leary of owners Gigginstown House Stud said:"We haven't seen the best of him this season but that's been down to the ground. It's been against him. Hopefully it will be more to his liking here and he might be more like his old self."

A hard race at Cheltenham can spell doom for horses coming on here and the shortish gap between the festivals raises some questions aboutClan Des ObeauxandBristol De Mai. All things being equal the up-and-coming Clan Des Obeaux would have a good chance with this more suitable test but stout-staying Bristol De Mai, who probably had the harder race of the two in the Gold Cup, has a little more to prove on this track. Both may have to give best to the fieryKemboy, though, as he took a swift stride up the ladder when zipping home at Leopardstown on his most recent completion at Christmas and his lack of a hard recent race is a plus.Road To Respectwas more solid in the jumping department than is often the case in the Ryanair and has a big run in him.Elegant EscapeandBalko Des Floshave much more to prove.

FIRST PUBLISHED 6:00PM, APR 3 2019
He ran well in the Gold Cup, but probably didn?t quite last home in the testing conditions. The track, better ground and shorter trip should suit him

All eyes on Klassical Dream as Stayers' Hurdle favourite bids for Galmoy strike Henry de Bromhead: Journey With Me isn't a certain Dublin Racing Festival runner Cleeve contender McFabulous 'a nice each-way price' for Stayers' - Paul Nicholls 'An absolute gem of a contest' - Leighton Aspell with his big-race verdict Allaho cut for Ryanair Chase repeat after making all in Thurles Grade 2 Shishkin is triumphant on a day when it was good to have shares in goosebumps