In from the cold: trainer Flannery's first winner in five years 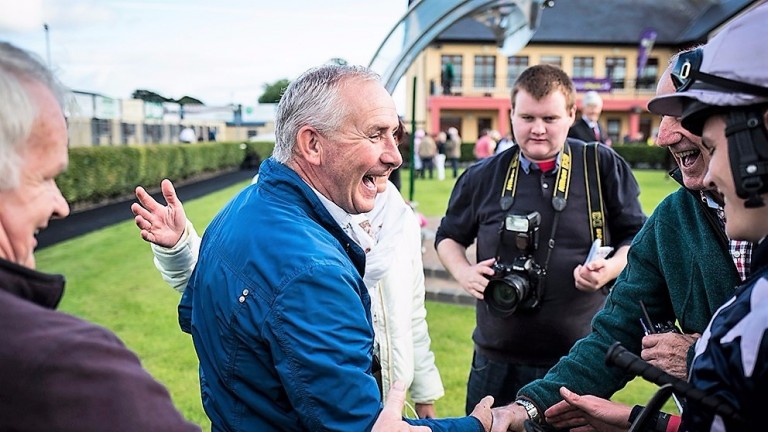 Michael Flannery: all smiles after Palmones provided him with a first winner since May 2012
Patrick McCann
1 of 1
By David Jennings 11:19AM, JUN 28 2017

Michael Flannery's last winner was in late May 2012 and ironically named Lean Times, but the Ballinrobe-based trainer ended a five-year drought at his local track on Monday evening thanks to the victory of Palmones in the 1m1f apprentice handicap.

"I was nearly giving this game up," admitted Flannery after the success of Palmones who came into the race with uninspiring form figures of 00800 and had been beaten almost 122 lengths in those five outings.

Denis Linehan got a charmed run up the inside on Palmones rounding the final bend and went on to record a comfortable one-and-a-half-length victory over Usa. The wait was over for Flannery.

"She is my only horse in training at the moment. It's a long time since I've had a winner but I've had hardly no runners. The horses we are buying just aren't able to compete to be honest," Flannery said.

He added: "I'll enjoy this because it might be a while again! It's brilliant, especially here in Ballinrobe. Palmones had a lot of issues and it was a case of trying to find those things. She was bought for small money, €6,500, and you don't buy them for that money unless they have a few issues. Denis gave her a great ride. He put her to sleep and then she got home."

Unsurprisingly, the Ballinrobe stewards asked Flannery to explain the apparent improvement in form of Palmones. The trainer stressed that the horse was fitted a cross noseband, having noticed that his charge ran with her mouth open on the last start. He also added that the change in tactics appeared to help his charge return to form.

Having considered the evidence, the stewards noted the explanation offered.