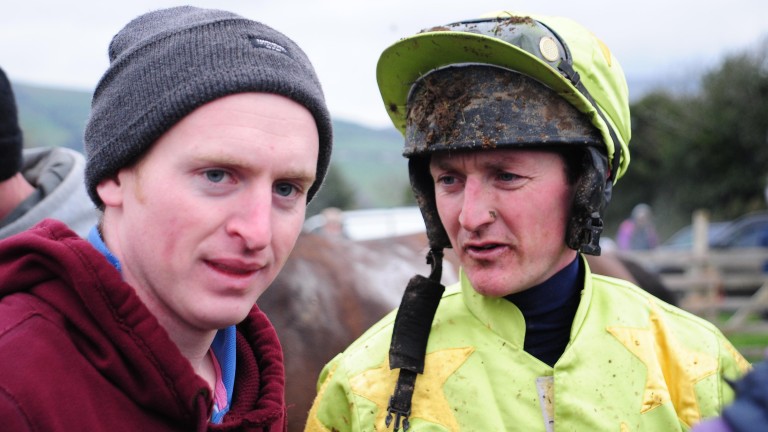 Donnchadh Doyle (left): bringing four of his nine weekend winners to the Cheltenham sales this week
1 of 1
By Brian Sheerin 7:00AM, MAR 13 2018

The search for the next potential Cheltenham Festival superstars takes place at the Tattersalls sale after racing on Thursday, when brothers Sean and Donnchadh Doyle, whose horses run under the Monbeg banner, are hoping their golden weekend is mirrored in the ring.

They warmed up for the festival by sending out nine point-to-point winners – four of whom are bound for the sale – over the weekend, while Crosshue Boy struck under rules at Leopardstown on Friday.

The Wexford team have plenty of high-class graduates in action on the track this week, including leading JLT Novices' Chase fancy Invitation Only, The Worlds End, who runs in the Sun Bets Stayers' Hurdle and Sky Bet Supreme Novices' Hurdle hope Claimantakinforgan, and Donnchadh Doyle will bring some of his future stars to the boutique sale that takes place when racing ends on Thursday.

Reflecting on the glorious run for the stable, he said: "We had a right time of things, thank God. I've never had a weekend like that in my life before.

"We're bringing over four that won over the weekend and hopefully it goes well. Brewers Project is an Aizavoski horse who won well at Ballyarthur and he'll go across.

"Feel My Pulse, a son of Stowaway who won at Lismore on Saturday, also goes there, as do Thatsy and The Big Getaway, who were impressive winners.

"We've also a nice filly by Jeremy, Beyondapproach, who was second at Tinahely last month, and she'll go, so we've loads to look forward to."

Speaking about some of the past graduates who are set to represent the brothers at the festival this week, Doyle added: "It's a very exciting time for us.

"We've Claimantakinforgan in the Supreme, Topofthegame in the Coral Cup, who's fancied, Go Conquer for one of the handicaps, Spiritofthegames and Talkischeap. There are plenty in there with chances.

"Sean also has The Worlds End and Invitation Only going for him and he had a winner at Leopardstown on Friday with Crosshue Boy.

"He doesn't have many for the track and, like myself, he's concentrated on the point-to-point side of things, but it's good to get the odd one on the track as well."

The Doyle brothers are not the only Wexford men approaching the festival with optimism, with renowned operator Colin Bowe looking forward to seeing former inmate Samcro strut his stuff in the Ballymore Novices' Hurdle on Wednesday for Gordon Elliott, while fellow trainer Denis Murphy has JLT contender Finian's Oscar, now trained by Colin Tizzard, to look forward to.

FIRST PUBLISHED 7:00AM, MAR 13 2018
We had a right time of things, thank God. I've never had a weekend like that in my life before