Plain sailing for Captain Bob on the Fibresand at Southwell 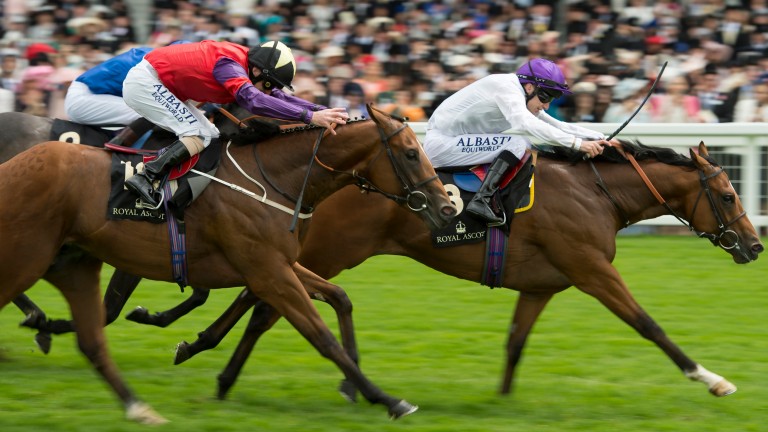 Top team: Prince of Lir wins the Norfolk at Royal Ascot for Captain Bob's connections of The Cool Silk Partnership and trainer Robert Cowell
Edward Whitaker
1 of 1
By David Ashfoth 11:57AM, MAR 30 2017

Captain Bob is a dangerous name, conjuring up images of the appalling tyrant and fraudster Robert "Captain Bob" Maxwell.

Perhaps the equine version, on display at Southwell (2.00) was named after "Captain Bob" Cottle, who presented children's television programmes, had a pet crow and generally seems to have been a "good egg."

In a curious (if tenuous) link, Maxwell once owned Oxford United while Captain Bob's owner Peter Swann (the man behind The Cool Silk Partnership), is chairman of Scunthorpe United.

I've no idea what Swann's like but in 2015 he agreed that Scunthorpe's players would wear the Prostate Cancer UK logo on their shirts the following season, a move that deserves one of those gold stars they used to award at school.

The other partner in The Cool Silk Partnership is Barbara Wilkinson, Swann's mother-in-law. She is the daughter of the founder of the Wilkinson store chain, now called Wilko and very big, even if the name has got smaller.

Wilkinson's daughter Karin, Swann's wife, was joint-chairman of the privately owned firm until 2014 when her side of the family sold their share for a reported £63 million.

Swann is a successful businessman in his own right, with a number of entertainment venues. It all translates into plenty of money being available for buying racehorses, mainly on the Flat but some over jumps with Kim Bailey.

Most of their horses have been trained by James Given but Robert Cowell trained Prince Of Lir to win last year's Group 2 Norfolk Stakes at Royal Ascot and Captain Bob is in Cowell's yard.

The six-year-old joined him from Charlie Hills but after 13 runs in 2016 Captain Bob's main achievement was to have his handicap mark reduced from 85 to 67.

Back on an even keel at Wolverhampton

Like a foundering ship, Captain Bob, now rated 66, seems to have stopped sinking and levelled out with two respectable runs at Wolverhampton.

This is Captain Bob's first venture on Fibresand and his second under the persuasive influence of Silvestre De Sousa. De Sousa is just the jockey to persuade Captain Bob to do the decent thing and enable Cowell to tell the owners that he knew Captain Bob would win eventually.

While basking in the warmth of success The Cool Silk Partnership will be able to prepare for Sands Chorus's appearance an hour later (Southwell 3.00), this time with Given in charge.

It's an open-looking handicap with the main interest on Hammer Gun. Trainer Derek Shaw once trained for Swann while Hammer Gun once ran, unsuccessfully, for the Queen and Sir Michael Stoute.

In his first four runs for Shaw Hammer Gun beat only two of his 39 opponents but it was love at first sight on Southwell's Fibresand. Having won at 100-1 Hammer Gun then won again and completed the unlikely hat-trick at Chelmsford.

Can he win again? Dunno

FIRST PUBLISHED 7:00PM, MAR 28 2017
Like a foundering ship Captain Bob, now rated 66, seems to have stopped sinking and levelled out with two respectable runs at Wolverhampton

Horsepower has potential - put it over the jumps and it could be a real winner Would you honestly have run Baaeed in the Arc if he were yours? I think not A rich man's world funded by the taxpayer: Irish racing has got this badly wrong 'We trust each other' - wingman Jacob happy to help with Whittington revival I'm excited about Amichi at Newmarket - whatever the handicapper may think! Shrewd small trainer can down big guns with 33-1 shot in Cesarewitch
Bookmaker
Price
E.W. Terms
bet365
Open Account
Ladbrokes
Open Account
William Hill
Open Account
Coral
Open Account
Paddy Power
Open Account
Betfair
Open Account
Sky Bet
Open Account
Sporting
BetVictor
Boylesport