As with most amateur races at Cheltenham, connections and punters alike tend to latch on to the same band of jockeys. The tactic has largely served them well in the Kim Muir, especially those who can secure Jamie Codd.

Codd goes for a fifth win in the race on Le Breuil,a year after the same partnership won the National Hunt Chase. The horse has offered hints of promise during what has generally been a testing winter for trainer Ben Pauling. While the Grand National has seemingly been the main aim, Codd would not be getting on a horseat Cheltenham fora prep run. 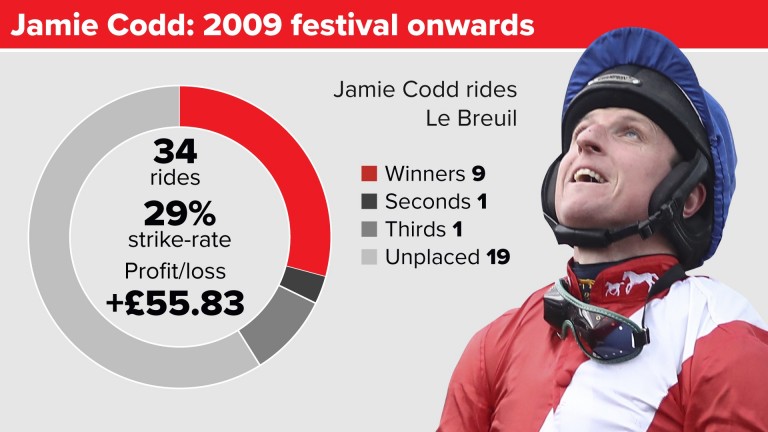 Derek O'Connor, the other go-to amateur from Ireland, won his first Kim Muir last year and rides Champagne Platinum. He will have to jump better than he has for Barry Geraghty, but O'Connor has shown that sort ofdeft touch before.

The sound-jumping Plan Of Attack should make Barry O'Neill's life easy and he has some solid handicap form behind him. The same goes for Fingerontheswitch, who pulled clear with Ok Corral in the Sky Bet Chase last time and is rare in this race in having his regular partner, the capable Millie Wonnacott. 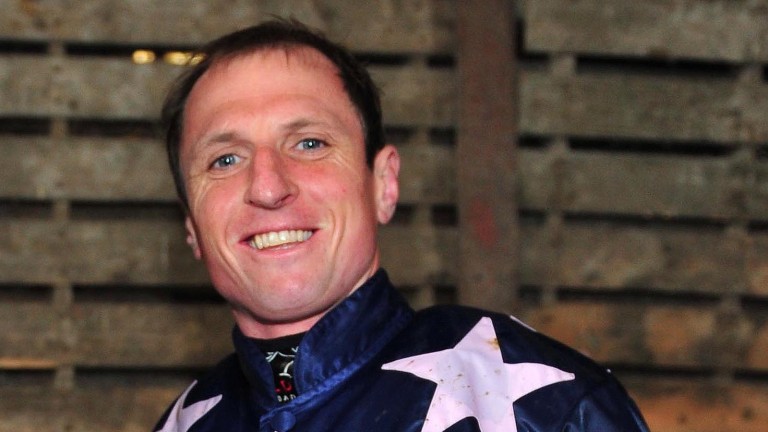 Jamie Codd: goes for a fifth win in the race
Healy Racing

There are not many shocks in the Kim Muir, which runs a little against the race's nature. Domesday Book won at 40-1 three years ago and a nominated live outsider this time is Thomas Patrick.

He is thrown in on old form and might have been saved for this. The addition of cheekpieces seems a sensible remedy to some laboured efforts on his recent profile.
Keith Melrose, betting editor

Nigel Hawke, trainer of Le Musee
He's been a frustrating horse. He's got the ability and is carrying top weight because he's the best in the race, but it's a mental thing with him. It's going to be up to him how he performs. He ran well in the Ladbrokes Trophy on his most recent chase start. He's on a mark that means he has to run in this calibre of race.

Ben Pauling, trainer of Le Breuil
I think he will run a big race. He's in very good order, as good as we can have him. The forecast rain will be in his favour. He'll be ridden by Jamie Codd which is a massive bonus. He's a dour stayer but has won over two miles before when hurdling, so he's not slow and the trip should suit him well. He gave us a special day last year in the National Hunt Chase, so it's great to be back.

Nigel Twiston-Davies, trainer of Flying Angel
He never does much wrong and ran well, staying on, in the Ultima last year. He has a big weight but hopefully he can do it. 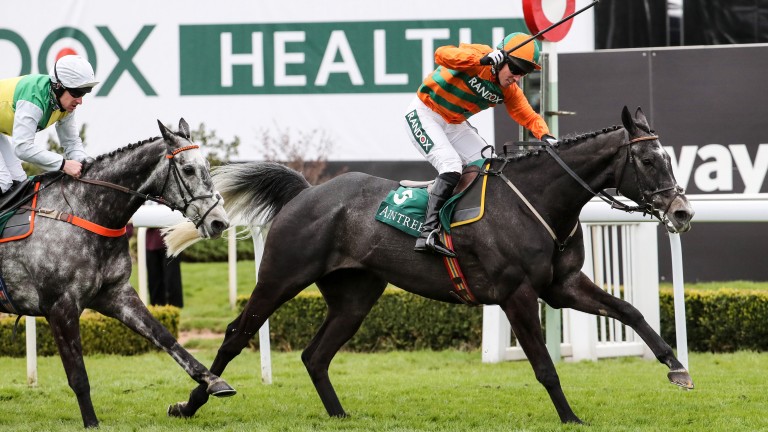 Flying Angel: "He never does much wrong and ran well, staying on, in the Ultima last year"
John Grossick

Philip Hobbs, trainer of Deise Aba
He's progressive and we're hoping he's still on an upward curve. He won well at Sandown last time and should have a strong each-way chance.

Patrick Mullins, rider of Fitzhenry
He's been hitting the crossbar all season in big handicaps and I do think this race will suit him.

Gordon Elliott, trainer of Milan Native
He's run well in some decent beginners' chases and this trip will suit very well. Rob Jones's 7lb claim will be a big help. A lack of handicap experience will be a concern. He strikes me as a horse who could run well here.

Warren Greatrex, trainer of Bob Mahler
This has been the plan for some time. He won the Edinburgh National last time and we know he's a strong stayer. We're putting first-time blinkers on him to help him concentrate and I think he's got a really good chance.

Dan Skelton, trainer of Ardlethen
He ran well to finish second in the Towton last time when he jumped well. He's ready for a handicap now and I'd give him an each-way chance.

Henry de Bromhead, trainer of Plan Of Attack
Barry has ridden him plenty of times before and he knows him well– we were lucky to get him. He had a lovely run in the Paddy Power and comes here with a decent chance.

Henry Oliver trainer of Kilfilum Cross
He showed he's coming back to a bit of form at Kempton. He put in a great performance to finish second last season and he's just started to come to himself, he seems to thrive at this time of year.

Nicky Henderson, trainer of Champagne Platinum
He was in the two-and-a-half-mile novice chase, but we took the view that he's a stayer. We also had the chance to use Derek O'Connor, which was something else that made this race seem attractive. I was a bit surprised the handicapper didn't put him up more than 3lb when he produced an improved performance to finish third in the Scilly Isles. If we are right in our conclusion that he is a stayer we're in a good place.

Harry Fry, trainer of Just A Sting
He ran well for a long way in the race last year on ground slower than ideal, so we're hoping it continues to dry back on the New course.

Venetia Williams, trainer of One Style
It's a step up again for him after three wins in a row. Lisa Turner takes the ride and won nicely on him last time. We're hopeful he can run another big race for us.

Having won by four lengths when 50-1 at Ascot in November, Militarian should not be underrated. His fourth place over 3m2f here on New Year's Day was a highly creditable performance given the mistakes he made, and his jumping was much better here last time. The step back up in trip and subsequent wind op are possible positives and he can run a big race if minimising the errors. Fitzhenry has been second in a couple of hot staying handicaps in Ireland this season and is feared most, ahead of Plan Of Attack who was one place behind him in the Paddy Power Chase in December. There are numerous other dangers, however, including Cloth Cap and interesting novice contenders Deise Aba, Milan Native and Champagne Platinum.
Ben Hutton

Did you know you can bet via the Racing Post? Sign in with your favourite bookmaker via the accounts button and bet directly from ourracecards