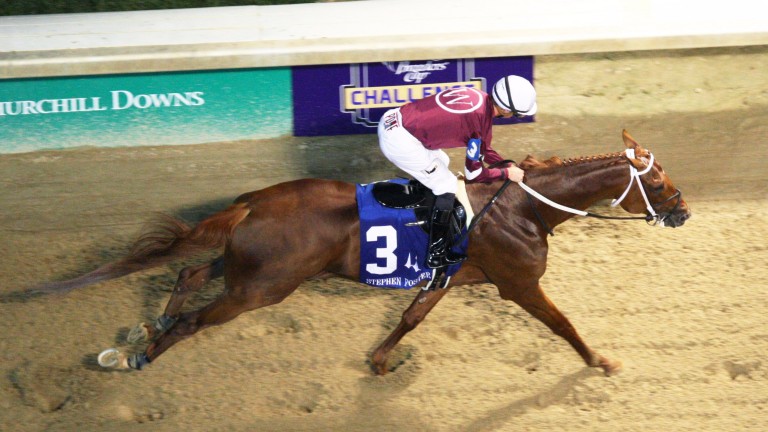 Gun Runner (Steve Asmussen/Florent Geroux) was no match for the awesome Arrogate in the Dubai World Cup in March, but with the world's best horse absent he was able to dominate the Stephen Foster Handicap at Churchill Downs on Saturday, setting up a rematch in the Breeders' Cup Classic on November 4.

The $500,000 contest is a 'win and you're in race' for the Classic and Black Tie Affair, Awesome Again, Saint Liam and Blame won it on their way to victory in the big one.

Connections of Gun Runner, a four-year-old colt owned by Winchell Thoroughbreds LLC and Three Chimneys Farm, will realise the task they face at Del Mar at the end of the year, but they were buoyed by his seventh-length, all-the-way win in the Grade 1 that remembers the composer of the Kentucky Derby anthem, My Old Kentucky Home.

Conceding weight to his seven rivals, he was too good for Honorable Duty and Breaking Lucky under Geroux, who said: "He's one of the best horses I've ever ridden and to put forward this type of effort after running in Dubai is so impressive."

"I was a bit surprised to find myself on a lone-lead but I wasn't complaining one bit. What a horse."

Asmussen, winning his second Stephen Foster after Curlin triumphed in 2008, added: "I think it was key taking our time with this horse. We always thought he would get better with age and he's proving that to us right now. It's special to win a Grade 1, but now we have our ticket punched to the Breeders' Cup. We got him to the winner's circle here at home and we set ourselves up for a great second-half campaign. I can't thank our owners enough. This horse is incredibly special in so many ways."

Gun Runner is 20-1 for the Classic with Paddy Power, who make Arrogate their 1-2 favourite.

Like Gun Runner, Forever Unbridled (Dallas Stewart/Joel Rosario) earned her entry to the Breeders' Cup with a comfortable victory on her seasonal return.

She is now qualified for the Breeders' Cup Distaff, which she was third in on her previous outing.

After making no impact when eighth in the Kentucky Derby, the well-regarded McCraken (Ian Wilkes/Brian Hernandez) got back to winning ways by justifying favouritism, despite losing his footing leaving the stalls.

FIRST PUBLISHED 7:13AM, JUN 18 2017
This horse is incredibly special in so many ways