Imperious Cue Card gives Brennan the ride of his life 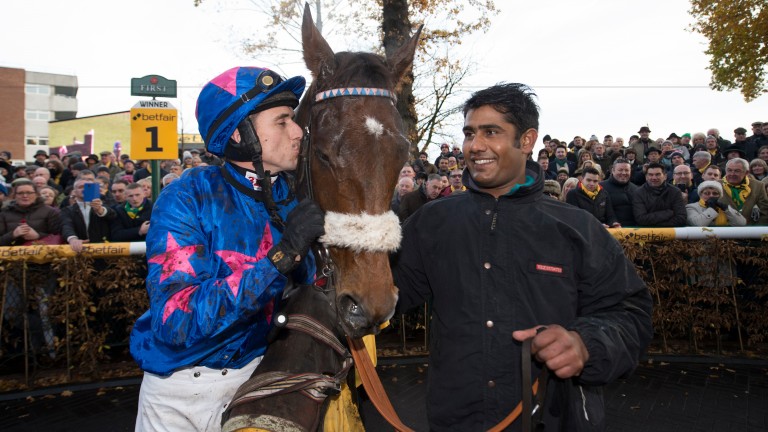 Long a living National Hunt treasure, Cue Card continues to delight and astound in equal measure and his third Betfair Chase win in front of a hugely happy Haydock crowd ensures that there is a corner of Lancashire that will forever be part of Dorset.

But there was more to this Betfair than Cue Card further cementing his already close relationship with the public because although Coneygree was beaten 15 lengths into second you could not have asked much more from a comeback run.

The 2015 Gold Cup winner – and never forget how he ripped that field apart – is back in business and the Bradstocks, fuelled by a bullish Dickie Johnson, were delighted.

There was none of that forced grin and bear it nonsense, you could tell they were thrilled that their long-legged powerhouse was still very much a going concern.

But this was Cue Card’s day – as it has been on seemingly countless occasions since he trounced his festival bumper rivals by eight lengths as a four-year-old which feels so long ago it must have been shown in black and white.

Age has never wearied him nor the passage of years tarnished either his allure or sheer ability. As Colin Tizzard, having a cloud nine season, said: “He is every bit as good as he has ever been and time is not catching up with him.”

Some will tell you that a three-mile grind through the Haydock heavy is not a thing of beauty but, of course, they are completely wrong because the sight of Coneygree trying to draw the sting from Cue Card was compelling.

This was steeplechasing in the raw with Coneygree making the running as expected and throwing in some mighty leaps with plenty of air to spare. He would have jumped the fearsome Haydock fences of old just as contemptuously.

Coneygree is a superb jumper and made not a semblance of an error – no surprise there because he is schooled endlessly, usually by the hugely capable Alfie Bradstock. They say there are satellites in space which have spent more of their lives on the ground than Coneygree.

Last year's Gold Cup winner, who is all potency and threat, stuck to his task in front but Paddy Brennan must have swallowed an extra handful of chill pills and was never in the slightest hurry, sticking to the old inside hare route and biding his time as he knew he was sitting on oceans of reserve.

He took closer order on Cue Card just under a mile out and you knew that although Coneygree wasn’t struggling his measure was about to be taken.

Cue Card led going to the fourth last and from then on it was all about standing up and taking the happy acclaim from the stands. This crowd admires Coneygree and wanted him back, but they love Cue Card as one of their own.

In command up the straight he came home alone and adored. 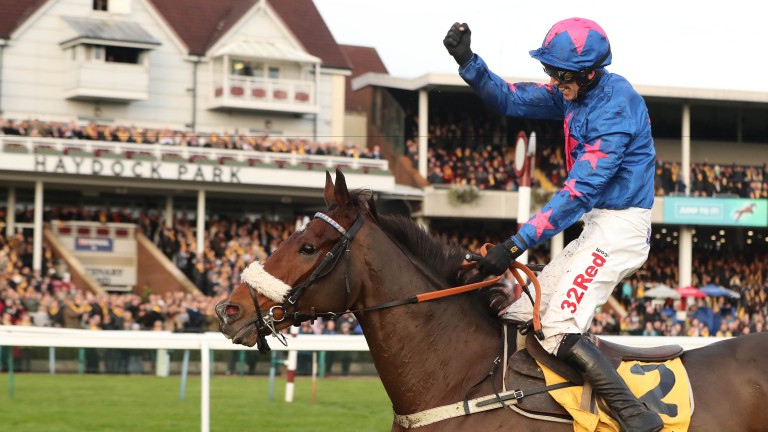 Brennan punched the air passing the post and then fell affectionately on the horse’s neck. He was unstinting in his praise and said: “That was his best ever and he keeps surprising me. With some give underfoot it is dangerous what he can do.”

Part of his delight on Saturday was that Cue Card was throwing wide open an all-important window of opportunity. I am a Brennan fan but nobody would pretend that he is not a complex fellow and you know that the third-last in the Gold Cup must occasionally play the monkey and leap on his back.

Tell him 1,000 times it was not his fault and it will matter not a jot. Cue Card, rampant on Saturday, tells Paddy that the fire still burns hot as ever and that means there is a chance of righting a wrong.

The Americans have a saying 'and justice for all' and a Gold Cup would be just that – for Cue Card, Tizzard, Brennan and everyone in the islands for whom the great chasers give life extra meaning and depth.

Truth be told there would have been no Betfair Chase triumph for Brennan but for your correspondent’s heroic rescue act at Keele services or some such horrendous motorway stopover.

Having paused on the trek north for a double espresso I was getting into the car when Paddy suddenly appeared in the car park and said: “Alastair I need a lift. There are two of us.”

I was tempted to say 'why do you need a lift? Got a decent ride somewhere?' But thought better of it.

So Messrs Brennan and Bargary were loaded into the car as they had managed, with the help of Alain Cawley, to do something not very bright with Paddy’s shiny Merc in the car park, involving a wheel and a raised kerb. The score was Kerb 1 - Merc 0.

It is fine licensing jockeys to ride horses but the truth is that they should not be allowed to drive cars.

So I was the AA yesterday – that’s Automobile Association rather than the other AA, with whose work I am also familiar – and duly delivered two jockeys to Haydock where both rode winners.

If Brennan had not got there who knows whether Cue Card would have won with some strange rider on his back?

I would never want anything so vulgar as money - perish the thought - but should Cue Card win the £1 million bonus a small consideration around the ten per cent mark would be appreciated. No, make that grabbed.

FIRST PUBLISHED 6:39PM, NOV 19 2016
Age has never wearied Cue Card nor the passage of years tarnished either his allure or sheer ability