Mark Brisbourne: trained at Ness Strange Stables in Shrewsbury since the start of the 1990s
Martin Lynch (racingpost.com/photos)
1 of 1
By Andrew Dietz UPDATED 2:52PM, MAY 29 2019

Mark Brisbourne will saddle his final runner in the next few days after being forced to move out of his Shropshire stable, where he has operated for nearly 30 years.

Brisbourne has trained at Ness Strange Stables in Shrewsbury since the start of the 1990s but the property is being sold for a barn conversion by owner the Earl of Bradford.

"I don't want to pack up but I'm being forced to quit," said Brisbourne.

"I've been at the yard for a long time and have looked for somewhere else but I don't really have the horses to move on.

"I have a dozen here but only half of those are race-fit, so unfortunately my last runners will be at Wolverhampton either on Friday afternoon or Monday night."

The former jump jockey followed his father Tony's footsteps by taking out a training licence in 1991 and saddled his first winner when Green's Cassatt won at Thirsk in August 1992.

He has successfully operated at the lower levels on the Flat, particularly on the all-weather where Wolverhampton has been by far his most profitable course, in a career that has yielded more than 550 winners.

Hannibal Lad: won some valuable handicaps for trainer Mark Brisbourne
Martin Lynch (racingpost.com/photos)
His most valuable victory came in a £100,000 Tattersalls sales race at Newmarket in 2003 with Milly Waters, while Hannibal Lad won some big handicaps including the Old Newton Cup at Haydock in 2001.

Adobe, who was bought for £1,800 out of John Gosden's yard, also helped put Brisbourne on the map when winning 17 races between 1999-2006 and the trainer played a key part in launching the careers of a number of jockeys such as George Baker and Martin Dwyer.

More recently the yard enjoyed success with £800 buy Belle Royale, who was sold for a "six-figure sum" to Michael Tabor, for whom she won a Grade 1 in America.

Brisbourne, who will be 62 next month, has seen the number of horses in his care diminish from a high of 94. 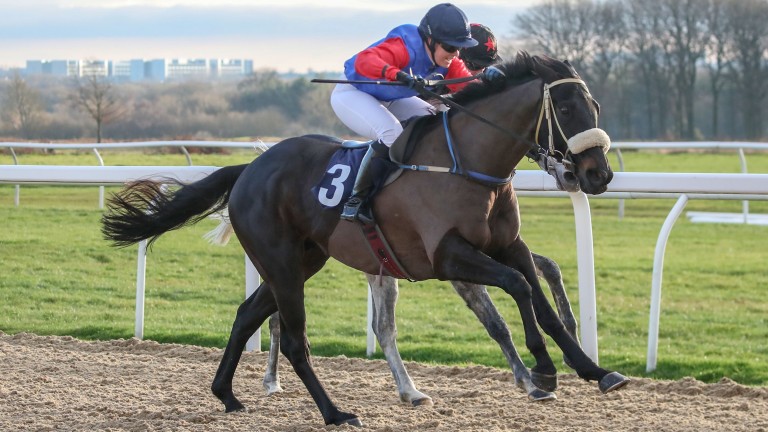 Belabour: a winner for the yard at Newcastle earlier this year
John Grossick/racingpost.com/photos
He had just a solitary win in 2016 and posted three successes in each of 2017, 2018 and this year and admits to suffering from similar financial struggles that caused the recent retirements of counterparts Brendan Powell and Nick Mitchell.

"I was fairly well self-supported but business rates have killed me – I've been spending £1,500 a month for empty boxes," he said.

Brisbourne, whose son Ben trains in Australia, has been assisted by daughter and amateur rider Becky and is in negotiations to find her and his team of horses new positions at another stable.

As for his own future, Brisbourne said: "I'd love to find a job to stay in racing and would welcome any offers."

FIRST PUBLISHED 3:22PM, MAY 28 2019
I've been at the yard for a long time and have looked for somewhere else but I don't really have the horses to move on