If the track's dodgy, then Gun Runner certainly ain't 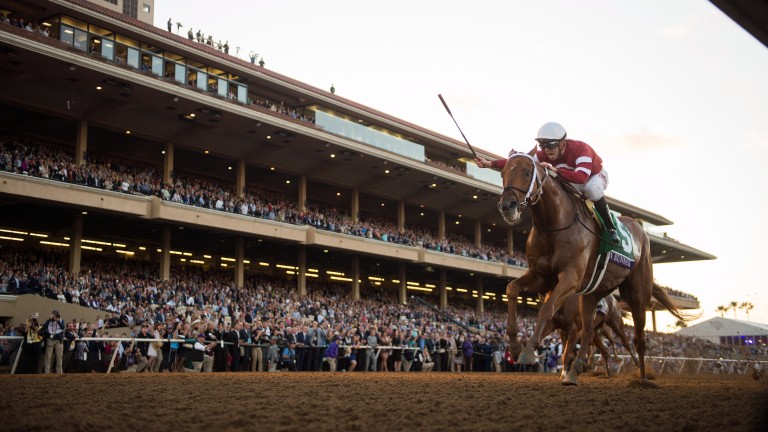 Whisper it quietly in these parts, but after a series of shock results and a readily perceptible track bias, questions will linger about the suitability of Del Mar – as idiosyncratic as it is delightful – as a Breeders' Cup venue.

A spectacular setting, no argument, one of the most splendid in the racing world. But more than one dubious outcome plus misery for a capacity crowd of just 37,682 getting in and out. Horror stories of hour-long waits penned behind a fencewaiting for an Uber were legion.

Yet while Arrogate's supporters will certainly be among those querying Del Mar's legitimacy after the horse dubbed 'America's King Croesus' exited the stage with another sluggish effort, let there be no doubt about the merit of the display that claimed America's most prestigious race.

Confirming his startling progress as a four-year-old, the Steve Asmussen-trained Gun Runner was an authoritative winner of the Breeders' Cup Classic, making all to win the $6 million contest in the style of a top-class dirt performer. Not for him any worries about an unfair surface favouring outside closers, nor concerns over a set of results (on the dirt, at least) that might have been easier to forecast via blindfold and pin.

Sure, there was disappointment as Arrogate barely troubled to show up, but it would be unfortunate if that were allowed to completely overshadow a top-drawer performance.

Gun Runner was hounded every step of the way by Arrogate's stable companion Collected. Fast fractions ensued – time after time similar prominent types had fallen in a heap over Breeders' Cup weekend, as winning trainer Steve Asmussen duly noted. "We all watched races all week, 22 and three on the lead on the inside hasn't had a lot of success," he said. "But I guess it wasn't Gun Runner in that spot on the previous ones."

Indeed not, and Gun Runner did not fold. Rather, the son of Candy Ride drew away from Collected in the stretch to score under former French champion apprentice Florent Geroux.

"He's had a lot of travel, a lot of fast races, and he’s better today than he’s ever been," added Asmussen, who is now eyeing the second running of the $16m Pegasus World Cup, the world's richest race, at Gulfstream Park in January. "The year this horse has put together would be hard to top."

In retrospect, the scene in a packed parade ring before the race told a tale. Asmussen had cut a distinctive figure in the twilight, prowling about beside his gleaming chestnut representative, the trainer's luscious silver waves cascading well below the shoulder, sunglasses perched on forehead. Asmussen had the louchely confident air of a well-heeled, ageing rock star.

Bob Baffert, more Bernie Ecclestone than Andy Warhol these days, was a study in anxiety as he prepared to marshal his four-strong team, eyes fixed on the floor. You know it's going to be a bummer, Bob, a Del Mar debacle. Juddmonte racing manager Teddy Grimthorpe also looked like a man awaiting his fate, and none too enthusiastically at that. 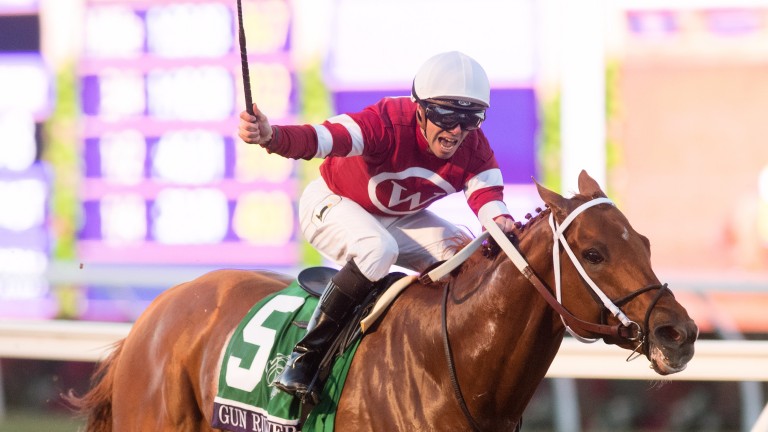 Florent Geroux celebrates winning the Breeders' Cup Classic
Edward Whitaker (racingpost.com/photos)
With reason, as it turned out. Gun Runner, who is owned by Winchell Thoroughbreds, had been made favourite in front of his old rival in ante-post lists, only for suggestions that the 'Big A' was back in town to produce a flip-flop close to the off. For Arrogate though, only the 'flop' part of that statement came to pass, his bathetic career ending in a laboured dead-heat for fifth, never close enough to land a glove on the principals. Squibs don't come any damper.

"He's like a pitcher who can't find the plate," said a shaken Baffert. "I hate making excuses for the big horse but he's just not the horse he was.

"He struggles over this racetrack," he added. "When he broke, he broke flat-footed and he weaved in. He lost a lot of momentum there. I don't know what happened to him. He's just losing interest and I think that's what it is. He's one of the greatest horses I've ever trained – I'm disappointed to see him go out like that."

Stud duties are also now on the cards for the Aidan O'Brien-trained Churchill, who came seventh after a rough dirt debut in which he broke well enough before becoming the meat in the sandwich between two rivals and losing touch at the far turn.

Fortunately this was largely a shot to nothing before retirement, unlikely to harm his European fee with the tantalising prospect of showcasing Churchill's wares to the US market. Moreover, it is worthwhile for Coolmore to be involved in a race like the Classic: having a runner with their name attached is akin to purchasing a TV advert during the Super Bowl. Expensive, but then it's a mighty big shop window. Even if it can sometimes look a bit of a Hail Mary.

FIRST PUBLISHED 2:47PM, NOV 5 2017
The year this horse has put together would be hard to top