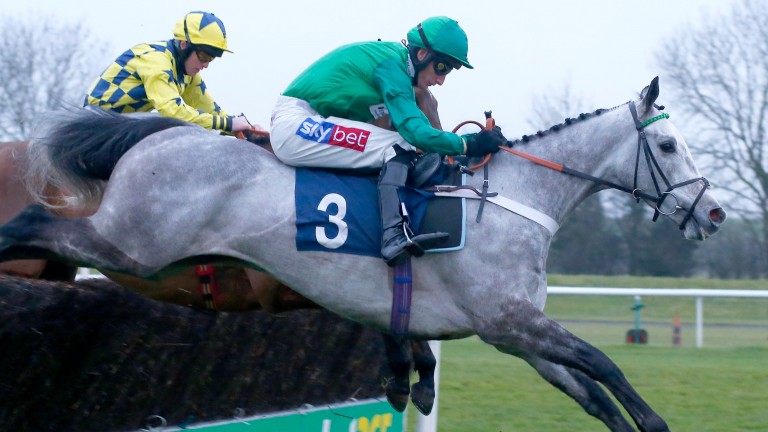 Terrefort made a good impression first time out at Huntingdon
Dan Abraham
1 of 1
By Richard Birch 6:00PM, FEB 2 2018

Is Terrefort a worthy favourite?

Although Terrefort was undoubtedly most impressive on his first start for Nicky Henderson, that victory came in a novice handicap chase at Huntingdon off a mark of 137.

The French recruit eased clear from the penultimate fence under Daryl Jacob to slam Bentelimar by ten lengths.

The handicapper was sufficiently taken with the performance to raise him to 151, and the five-year-old does receive 3lb from his four older rivals.

However, there is little doubt the move from a handicap to Grade 1 company represents a significant step up in class and, at face value, odds of 11-8 appear skinny.

Henderson said: “He went up a stone for that victory at Huntingdon, which was unbelievable, really. If the handicapper's right he has a very good chance.”

Can Cyrname make it three wins from his last four starts?

Cyrname produced a career-best effort on his latest outing at Kempton over Christmas when beating Shantou Rock by seven lengths in the Grade 2 Wayward Lad Novices’ Chase.

The six-year-old had been beaten off a mark of 139 on his previous start in a Newbury novice handicap chase and is clearly going the right way.

Cyrname often failed to settle during his earlier days, but the switch to fences seems to have helped in that respect.

He is now rated 150, and trainer Paul Nicholls said: “He’s done nothing wrong over fences, and has kept on improving. He deserves to take his chance in this Grade 1, but it looks a tough race.”

The Neil Mulholland-trained Kalondra came in for support with several bookmakers at 7-2 on Friday afternoon, and he looks capable of a big run.

Winner of two of his three starts since switched to fences, Kalondra caught a tartar in Modus at Wincanton in November prior to beating Coo Star Sivola by three and three-quarter lengths at Cheltenham the following month.

He jumped well that day and showed a nice cruising speed before settling the issue after clearing the final fence.

This step up to Grade 1 company clearly demands more, but he is another going the right way and is entitled to the utmost respect.

Can West Approach and No Comment outrun their odds?

West Approach and No Comment are the likely outsiders, but neither can be dismissed in a race which looks more open than the market suggests.

Colin Tizzard, trainer of West Approach, said: “He just didn’t appear to stay three miles at Kempton so we’re dropping back in trip.

“He’s got form in Grade 1 races, and we’ll know where we’re going with him at Cheltenham after this.”

Philip Hobbs, trainer of No Comment, who was a progressive staying handicapper over hurdles last season, reports the seven-year-old to have schooled well ahead of this chasing debut.

FIRST PUBLISHED 6:00PM, FEB 2 2018
He went up a stone for that victory at Huntingdon, which was unbelievable, really