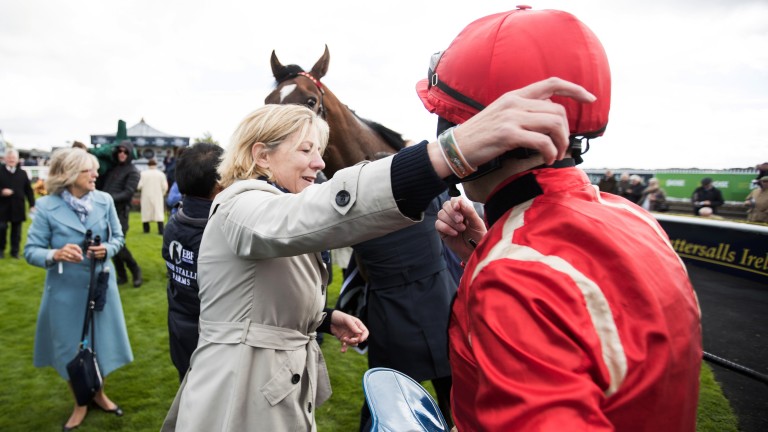 The five-year-old is one of four British-trained challengers for the €100,000 contest and will be seeking a second win at the Curragh, where he was successful in the Bold Lad Handicap in September.

The British-trained quartet also includes the David Barron-trained Gunmetal, who is on a hat-trick following wins at Thirsk and Newmarket, while the David O'Meara-trained Intisaab and David Loughnane's Shepherd's Purse complete the raiding party.

Eve Johnson Houghton, trainer of Ice Age
Ice Age loves it at the Curragh, so we're going back to what he does best. He won't mind any rain.

David Barron, trainer of Gunmetal
He's done everything well at home and we're very happy with him. There's a nice prize there so we thought we should have a go at it. He's done very well this season and is a nice horse who likes fast ground. I'd have liked him to be drawn a little higher.

Aidan O'Brien, trainer of Full Moon
He seems to be getting his act together and is going there in good form.

David Loughnane, trainer of Shepherd's Purse
He's in very good order. He has a lot of power and is very sharp. I definitely think the race will suit him as he ran well in it in the past when trained by Joe Murphy. We hope to be quite positive with him and stall 13 is a nice draw. We're very hopeful of a big run and we're going there quietly confident.

Andy Slattery, trainer of Sors
He's in good form and going back up in trip should suit as he seems to have lost a yard or so of pace. The ground might still be a bit quick, though.

Accidental Agent: the outsider who took on and beat racing elite at Royal Ascot Eve Johnson Houghton: the idea of putting more racing on is ludicrous