The racing manager and consultant, 47, gets a grilling 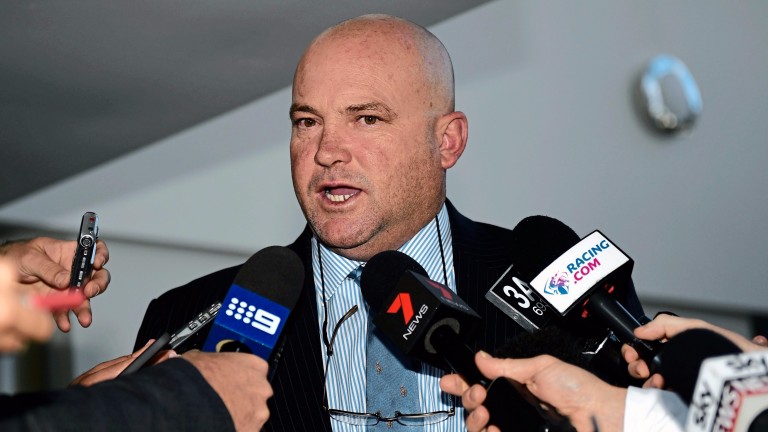 What advice would you give your ten-year-old self?
I wouldn’t change too much, I’m pretty happy with the way things have gone.

What is your earliest racing memory?
I grew up in country Queensland and I used to attend the local races with my family aged four or five. My family were on cattle farms in western Queensland and they all raced horses, so it was something I got exposed to early on.

What was it like to be involved with a horse like Black Caviar?You had to pinch yourself. I probably never appreciated it while it was happening. But since she’s retired I’ve learned to appreciate what she meant to so many people here in Australia and probably abroad as well. She was a great thing for racing and it was overwhelming to be involved with her.

Black Caviar’s first foal ran this month. How was it watching her run instead of training her?
I’m not a sentimental sort of a bloke. It was very interesting and I’m hoping she has some success in the breeding barn, for sure. It was a little funny watching her foal race but I’ve cut the umbilical cord and moved on.

Why do you think you were able to train fillies and mares with such success?
I’m not sure really. I won a lot of good races with colts during my career as well but Black Caviar and Typhoon Tracy are the two that come to the fore when people think of me. A lot of my stalls had fillies in them and they suited my style. I didn’t train them too hard and they were very receptive to my methods.

What’s the best bet you’ve ever had?
I backed one of my own in a stakes race at Caulfield one day called Niagara Falls. She won at 33-1. She was a front-runner in a race devoid of speed and she was ready to pounce. Luke Nolen, who was predominantly my stable rider, was brilliant from the front and it all worked out well.

If you could play any other sport professionally, which would it be and why?
Rugby League. I grew up with it and it was rugby league in the winter and cricket and racing in the summer.

What was it about horses that enticed you?
I was raised at the end of an era when horses were still used mainly in stock work in Australia, before helicopters, motorbikes and Land Cruisers started to dominate that scene. They were part of my upbringing and I wanted to be involved with them.

Frankel or Black Caviar?
Why do we have to compare our great horses? They are great for the sport and for the industry, so why don’t we just enjoy them? One night when I was in England, unbeknown to the media, I spent about an hour with Sir Henry Cecil at his yard and had a good look at Frankel and his brother Bullet Train and that was great. Henry then came down to see Black Caviar at 8.30 in the evening, keeping it well away from the press. To have him spend that time with her was one of the most special times in my career. I was very taken aback by having such a great horseman admire my horse.

You are no longer a trainer, having quit last year. How are you handling life away from training?
I’ve handled the transition very well, I’ve surprised myself. I thought I’d miss training but I can honestly say I haven’t. I miss the comradeship of my fellow trainers on a day-to-day basis. The one thing I missed out on was the chance to train abroad and try something different.

What do you mean by not training abroad?
Would an Australian trainer using Australian methods succeed in Newmarket, for example? Or is it a matter of when in Rome do as the Romans do? I’ve always wondered about that and it’s a regret that I never got the chance to train abroad.

What’s your biggest ambition in racing?
I went beyond anything I ever expected in my training career, so I’m happy to poke along at the edges and help out where I can. Myself and my wife still race a significant string of horses and have about 40 or 50 with various trainers. I do some consultancy work for some of my old clients as well. I’ll always be involved in some shape or form.

What is your worst habit?
Smoking. I still do it and I love it. I’d have cigarettes on toast if I could.

If you could meet one person, past or present, who would it be?
One of my passions is Anzac war history and a bloke called Sir John Monash is someone I’d have loved to have met. He basically led the Australian Imperial Force in World War I and he was a brilliant man and a hero, but because he was a German-Jew he never received his right accolade.

What is your most treasured possession?
My family.

How do you relax away from racing?
I do a lot of reading and follow a lot of Anzac war history.

What is the funniest thing you have seen on a racecourse?
A female apprentice jockey riding for me one day had her riding breeches stripped from her in a race. Her name was Shayla Quick and leaving the barriers her breeches got caught on the side of the gates and she rode the race in her underwear with her breeches flapping behind her. She coped with it well.

Which trainer do you most admire?
That’s a hard question to answer. I’ve got admiration for a lot of trainers, I really have. I couldn’t nail just one in Australia or abroad as there are so many fine trainers.

What’s your biggest fear?
I’ve got three daughters who are 21 and 20-year-old twins. My biggest fear is for their health and happiness.

You don’t mind social media despite being at the centre of a social media storm?
You get a good gauge of what people think of you and people get a bit braver when they get a bit of alcohol in them late at night. It’s nice to know where you stand with people even if they don’t say it to your face. The one thing that pisses me off about it is the people that don’t use their own name. If you have an account you’ve got to have the balls to have your own name there.

Who would be your ideal dinner party guests?
I’d love to be joined by Sir John Monash, Joseph Stalin and Sir Winston Churchill. I think that would make for a good party.

FIRST PUBLISHED 12:26PM, AUG 7 2017
One night when I was in England, unbeknown to the media, I spent about an hour with Sir Henry Cecil at his yard