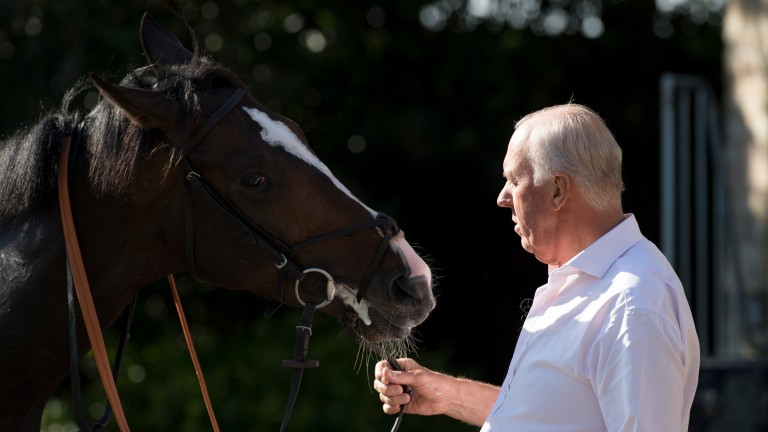 Eminent with trainer Martyn Meade, who will be disappointed if Huxley Stakes success is not secured
Edward Whitaker
1 of 1
By Jon Lees UPDATED 10:49AM, MAY 11 2018

A season of great expectations for Eminent begins at Chester on Friday when one of the most talked about sons of Frankel begins a campaign for Group 1 honours.

The star of the Martyn Meade stable flirted with top-level success in 2017, finishing sixth in the 2,000 Guineas, fourth in the Derby, fifth in the Coral-Eclipse and third in the Irish Champion Stakes, beaten less than five lengths in each.

His two wins were at lower levels, in the Group 3 Craven Stakes and Group 2 Prix Guillaume d'Ornano, and this year will be structured around making his Group 1 breakthrough.

Royal Ascot's Prince of Wales's Stakes is his early summer target and the Huxley Stakes his stepping stone to that goal.

Recently moved with the rest of the Meade string from Newmarket to Manton, Eminent has a new partner too, with Oisin Murphy taking over for the first time in what connections hope will be a season-long association, subject to availability.

Meade said: "Eminent has wintered really well and I seriously think he'll take all the beating.

"Obviously he'll have to act on the track, but I think that will be okay. He's drawn well, he coped well enough at Epsom last year and I think he's in a very good spot at the moment. I'd be very disappointed if he didn't win.

"He doesn't have to carry a penalty, which is one of the reasons we chose this. The ground will be perfect and the idea is that this is a prep run for the Prince of Wales's.

"He'll need to win it for us to fulfil our further aspirations, but I see no reason on his homework that he won't. I couldn't be more pleased with him."

Eminent faces five race-fit rivals headed by Forest Ranger, who ran a career-best to capture the Group 3 Earl of Sefton Stakes, in which Frankuus was back in seventh, having been gelded over the winter.

Trainer Richard Fahey said: "I'm not sure how much gelding helped him. He was quite a big horse but was never colty. That's not where the improvement has come from, he's just got a bit more mature.

"He's a Group 3 winner so has to try to reach this next level and he's rated to have a go. I think he's at that level. He wasn't stopping at Newmarket and we felt this was the trip to go up to, but I trained the sister and she didn't stay when she always looked like doing so."

Stablemate Gabrial has his fifth start in the race. "He's been placed in this a few times and I'd settle for one of those," said Fahey.

Got a runner in every race tomorrow at the most beautiful race course in the land @ChesterRaces . I need winners and not the unlucky seconds I got today .
If I win the cup , I will do something very very crazy and @itvracing may halt their transmission !!

Frankuus performed well below his best at Newmarket, and Mark Johnston's son and assistant Charlie said: "He disappointed and ran very free. I'm hoping that race has taken some of the gas out of him and he can run a solid race."

War Decree has been travelling the world tackling Group and Grade 1 races, but when last in Europe he won a Group 3 at Dundalk in September, having taken the 2016 Vintage Stakes at Goodwood the last time he contested a Group 2.

Trainer Aidan O'Brien said: "He's been in good form since his first run of the season in Meydan and we think the track should suit him."

Convey finished fourth in the Winter Derby, having won that race a year earlier, but has won only once in 13 runs on turf.

FIRST PUBLISHED 6:03PM, MAY 10 2018
He coped well enough at Epsom last year and I think he's in a very good spot at the moment