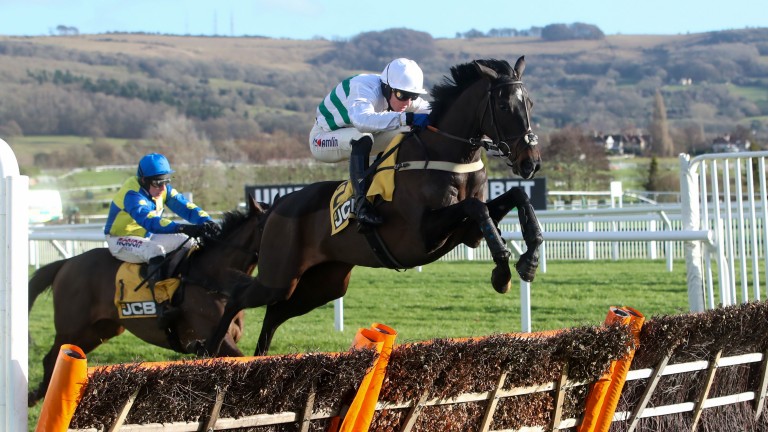 The key to finding the winner of the Coral Cup is to focus on a lightly raced, progressive young hurdler from a top stable who has been meticulously laid out for this race.

As ever, there are any number who fit that bill, but it’s hard not to gaze at Craigneiche’s overall profile without thinking “he’s the one”.

Nicky Henderson has landed the last two Coral Cups and everything about the seven-year-old Craigneiche suggests he could make it three.

The son of Flemensfirth has form figures of 1311, the sole defeat coming at the hooves of now 148-rated chaser The Big Breakaway on his first start over hurdles.

Craigneiche bolted up off a mark of 127 when graduating to handicaps at Ascot in January, slamming Arrivederci by seven lengths, and has clearly been put away since to protect his 12lb higher rating for the Coral Cup.

He has a nice racing weight of 10st 10lb, is open to further progress, and won’t mind the ground.

Others with striking profiles include the Denise Foster-trained Grand Roi, a five-year-old who could blossom for this opportunity to step back up in trip, and Willie Mullins’ Koshari, an eyecatching sixth of 22 behind Maze Runner at Leopardstown last month.

Birchdale, by no means disgraced in the race 12 months ago when eighth to stablemate Dame De Compagnie, reverts to hurdling after a series of unsuccessful attempts over fences.

He races off a 2lb lower mark this time and it’s not hard to make a strong case in his favour.

The locally trained Witness Protection, who creeps in at the foot of the weights, could be primed to outrun odds of 25-1.

He has a notably high cruising speed, and that attribute is essential to land fiercely contested, furiously run Cheltenham handicaps of this nature.
Race analysis by Richard Birch

Olly Murphy, trainer of Thomas Darby
He's in very good form and drops back into a handicap. He's carried top weight to victory previously and we've fitted him with first-time cheekpieces. I think a fast-run two five will suit him well and he's got an each-way chance.

Denise Foster, trainer of Grand Roi
He’s a horse who looks to have improved throughout the season. He had a nice run last time at Naas where he was wrong at the weights and had to give a lot of weight to Bachasson. He’s a lovely, young horse with lots more to come, I hope.

Willie Mullins, trainer of Koshari, Sayo, Blue Sari & Dysart Diamond
Paul [Townend] has picked Koshari, who would appreciate rain-softened ground. We think he could still be well handicapped. Sayo has been hard to follow and is probably best watched here. Blue Sari is going up in trip and is a horse that is open to a lot of improvement. Dysart Diamond has a nice racing weight.

Nicky Henderson, trainer of Janika, Monte Cristo, Birchdale & Craigneiche
Craigneiche and Monte Cristo both won their last starts very impressively, rather too impressively I'm afraid — I think they've rather done themselves in as they got 10lb and 12lb hikes. It's hard to win a Coral Cup if you expose yourself like that. Janika's always promised there's a good race in him one day somewhere, it could be here. Birchdale's been over fences and switches back, but he's been in good form.

Paul Nicholls, trainer of Saint Sonnet
He's been running over fences in deep ground and hasn't really enjoyed jumping fences, so we thought we'd run him back over hurdles. The more the ground dries the better.

Gary Moore, trainer of Botox Has
I'm quite looking forward to him, I think he's got a great chance. He looked really good at the start of the season. The step up in trip is what he needs I think, so I'm quite hopeful.

Emma Lavelle, trainer of Boreham Bill & Shang Tang
They're in really good form. Boreham Bill ran an absolute blinder when he won at Kempton and he deserves a crack at a race like this. The ground drying out will improve his chance. Shang Tang is a strong traveller who ran with the choke out in the Lanzarote and it all went wrong for him. We'll probably ride him with a bit of restraint and he could run a big race.

Jonjo O’Neill, trainer of Palmers Hill
He’s been very disappointing this year. We’ve decided to give it a go with him anyway and if he’s good enough and back to himself, then he’ll have a chance in this.

Ben Pauling, trainer of Shakem Up’Arry
He ran very well in the Betfair but looked a bit short of pace early doors. He stayed on well and is ready for this step up in trip. He probably has the experience a novice needs to run well in a Coral Cup. Hopefully, he can put himself in the mix.

Nigel Twiston-Davies, trainer of Our Power & Guard Your Dreams
I think Guard Your Dreams has got a good chance. He missed the start at the Betfair Hurdle but was staying on strongly towards the finish. The step up in trip would be no problem for him and he'll like the ground. Our Power won the Silver Plate at Kempton last year, so he'd also have a good chance.

Dan Abraham, syndicate manager for Foxtrot Racing, owners of Witness Protection
He’s a novice and this is a serious step up for him, but he travels well in his races and he jumps really well. We think a lot of him and he’s a lovely horse for the future over fences too.

Paul Hennessy, trainer of Heaven Help Us
It's a huge honour to have a runner here, a privilege. She's eating everything and drinking well since she's arrived over here. She's like a coiled spring. She's ready to rock.
Reporting by Peter Scargill