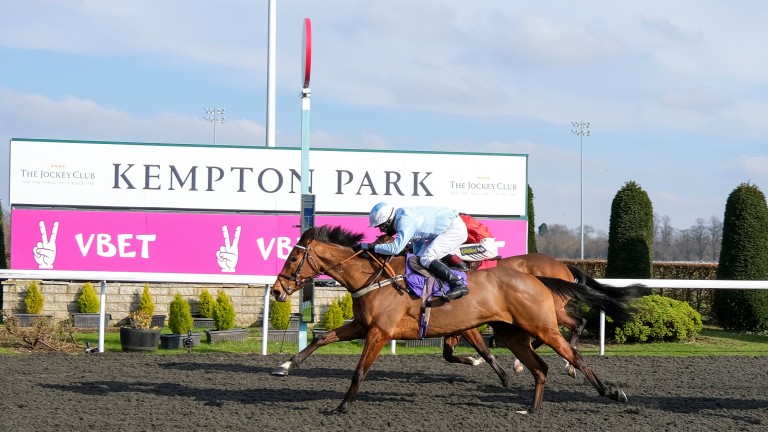 He may have had his face mask on but there was no disguising the relief on Harry Whittington's face after Sheila Nash ended a losing run stretching back to November for his yard with victory in the 2m bumper for mares.

Everything that could have gone wrong has for the Lambourn trainer recently, including when Sheila Nash whipped round and unseated her rider at Wincanton last week.

There was no repeat on this occasion and, with the general health of his string on the up, Whittington is hoping to finish the season with a flourish.

"I needed that," said the trainer after ending a losing run stretching 91 days and 63 runners. "She's a very likeable mare and so tough. She's actually named after my grandmother, so it's quite special.

"It's great to be back in the winner's enclosure because we've had a tough couple of months."

The win gave Whittington just his tenth success of the season and he conceded that recent times have been among the most challenging of his training career.

"It's been tough but we've learned more in the last two months than we have in the whole time we've been training horses," he added.

"We've probably had the same bug as some of these other yards where you can't put a finger on it, but it seems like they're very well at home now, so please God we're out the other side."

Nigel Hawke praised the quick thinking of Kempton and the BHA for creating a nine-race fixture at short notice and the trainer's trip back to Devon will have been a happy one after the 16-1 victory of Galore Desassences in the 2m open bumper.

Already placed in a turf bumper at Doncaster, Galore Desassences came from well off the pace under Kieren Buckley to score by a length from Earth Company.

"It was a messy race but he found gears," said a delighted Hawke. "We've always thought a lot of him, but they've got to prove it. He's done the job today, but he's going to be a better horse in six months." 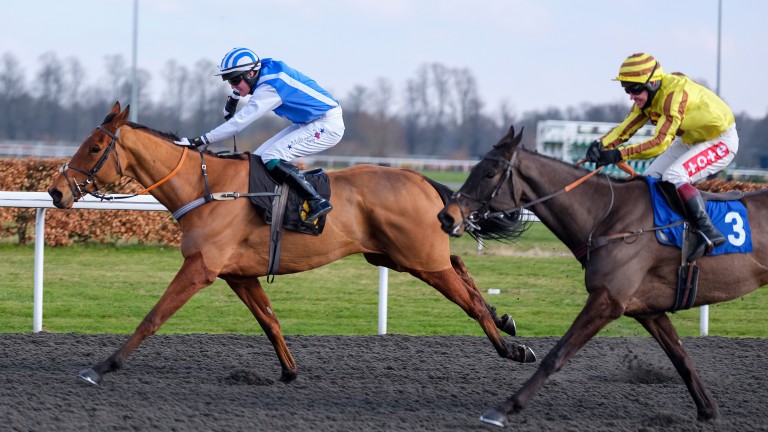 Like most trainers, the recent spate of abandoned meetings has made race planning difficult for Hawke and he only considered this race for Galore Desassences on Wednesday morning.

He added: "I sat down yesterday morning for ten minutes with a list of horses and thought why not put this fellow in? We bring a lot of horses for racecourse gallops, so it's the next best thing and we're getting paid. Coming here today has done him the world of good."

Size certainly mattered in the 2m bumper for newcomers as strapping youngster Chalgrove stretched out his long neck to shade a four-way photo under Richard Johnson.

The former champion jockey revealed winning trainer Philip Hobbs thinks Chalgrove has the biggest feet of any horse he has trained, while an extension to the girth strap was needed to secure Johnson's saddle to his back.

"It's largely a Flat pedigree but judging by the size of him, hopefully he's going to make a nice jumper," said the winning rider.

FIRST PUBLISHED 6:07PM, FEB 11 2021
It's been tough but we've learned more in the last two months than we have in the whole time we've been training horses