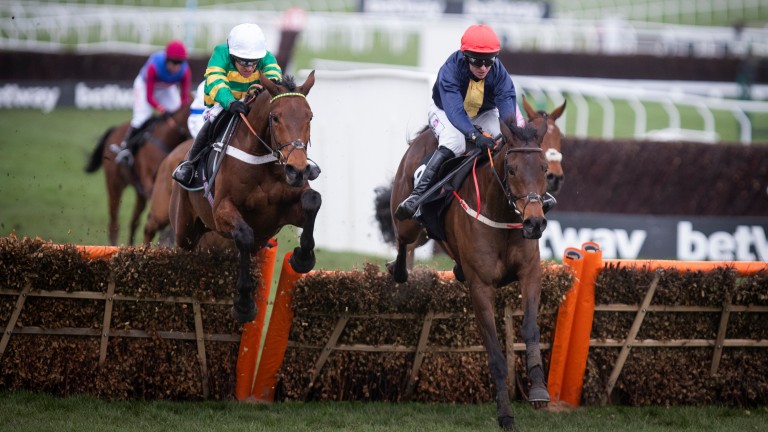 City Island (right): classy horse who landed the Ballymore as a novice
Patrick McCann
1 of 1
By Brian Sheerin UPDATED 8:43AM, DEC 31 2020

Willie Mullins, who has won the last three editions of this race, appears to have strong claims of a fourth with returning 2018 winner Bachasson after a successful reappearance in the Clonmel Oil Chase.

Mullins will also be represented by Scarpeta, although Bachasson is very much the stable number one in what is a tight contest.

The joker in the pack is City Island, who remains a classy prospect for Martin Brassil. The 2018 Ballymore Novices' Hurdle winner had a season to forget last term after failing to fire over fences before being pulled up in the Stayers' Hurdle, though the lack of a recent run and heavy ground won't help his cause.

One horse who will love the conditions is Darasso, who should be difficult to beat on official ratings – Joseph O'Brien’s charge is rated 4lb superior over hurdles than his nearest rival Bachasson.

Ted Walsh, trainer of Any Second Now
He's limited in opportunities. This race is close to home and, while he didn't run great the last couple of times, hopefully he can show a bit more spark.

Willie Mullins, trainer of Bachasson and Scarpeta
Bachasson is back in form again. You'd be a little worried coming back over hurdles having been over fences, but hopefully his jumping will be sharp enough. He's fit and well and the trip and track will suit him as he won this race back in 2018. We're just hoping the shorter trip and the benefit of a comeback run will help Scarpeta, but he would need to improve hugely to get involved.

Martin Brassil, trainer of City Island
He's a good ground horse but we need to get him into a competitive mode in order to plan a route towards the Stayers' Hurdle. He's done plenty of work and is fit enough but the ground is a worry. People seem to forget he had his ground the whole way through the year he won the Ballymore. You would be inclined to put a line through last season as he had been chasing and didn't have the ideal prep for Cheltenham. I haven't lost faith in him.

Joseph O'Brien, trainer of Darasso
He ran well in this race before. He has been training well since he finished second in the Hilly Way. We're hoping for a good run here – it's a small field but it's a competitive race. If he can run to his rating he probably is the one to beat. He should handle the ground well.