'I had 50 stitches in my face': Danny Cook ruled out of quick return from injury

Danny Cook: has been out of action since October 17 with multiple facial injuries
John Grossick
1 of 1
By Andrew Dietz 10:06PM, NOV 9 2020

Danny Cook, who required 50 stitches in his face after being trod on by a horse in a fall at Market Rasen this month, has been forced to scrap plans for an imminent return.

Cook has been out of action since October 17 with multiple facial injuries and failed to get the all-clear to come back in time to ride Definitly Red in the bet365 Charlie Hall Chase at Wetherby on Saturday.

The incident left the jockey with a broken nose, fractured eye socket and cheekbone, and he was initially placed on a liquid diet because of damage to his jaw.

Recalling the fall on the Sue Smith-trained Ravenhill Road, Cook said: "A horse behind trod on me, breaking my nose and fracturing my eye socket and cheekbone. I had around 50 stitches in my face and it was such a mess the kids wouldn't come near me.

"I was struggling to get food into me and was on Weetabix and soup for the first few days."

Cook had been hoping to make a speedy recovery to ride 2018 Charlie Hall winner Definitly Red at Wetherby, but his specialist ruled that out and told him to come back in two weeks' time. 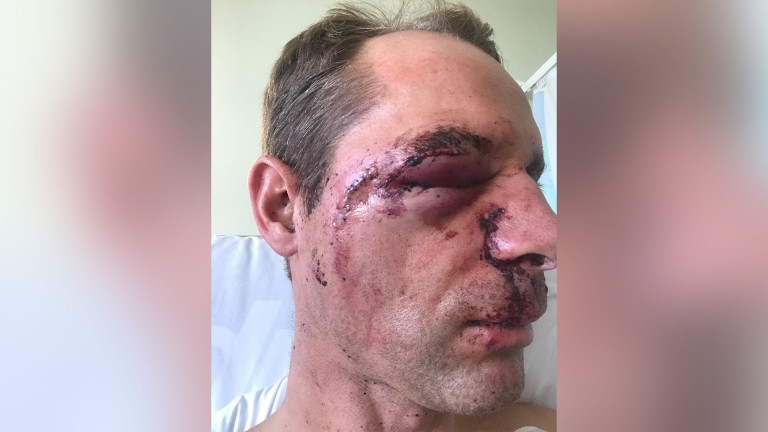 "It's a bit gutting as I'm feeling fine and healing up, but there's obviously more to it than I thought," he said.

"I've got no protection of the eyeball and need the eye socket to heal. There are bone fragments in the eye socket and I was told if I took another bang to it, I could lose my sight."

Cook was taken to hospital in Hull from Market Rasen, where he spent one night, and received treatment in front of the television cameras.

"There was a crew from the A&E After Dark programme on Channel 5 and I think that episode is due to come out in February or March," he added.

Henry Brooke, who has ridden Definitly Red four times including when winning the 2016 Rowland Meyrick at Wetherby, has been booked to ride the Brian Ellison-trained chaser in the Charlie Hall.

Definitly Red is a best-priced 8-1 with sponsors bet365 in a market headed by 7-4 favourite Cyrname.