Insight QUOTES OF THE WEEK 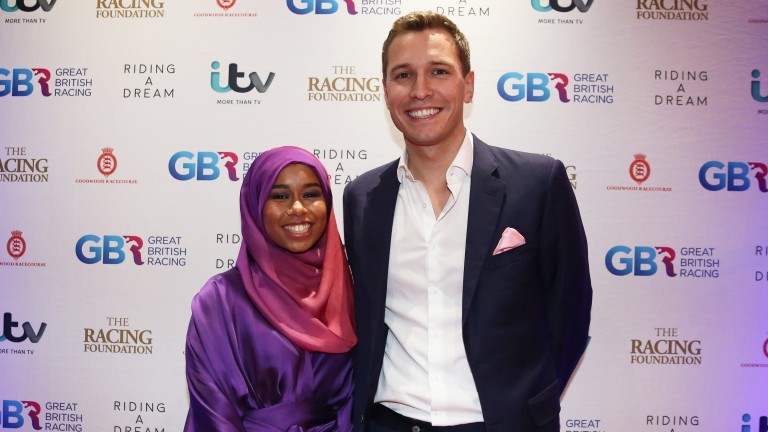 Khadijah Mellah with Oli Bell at the documentary film premiere of Riding a Dream
Great British Racing
1 of 1
6:00PM, NOV 23 2019

I think she underestimates what an achievement it is – it is a phenomenal achievement and she could yet pass 106 [Josephine Gordon’s record] to make her the winningmost female ever. She is not afraid to go places and ride bad horse and get a tune out of them which is the sign of a good jockey
Hollie Doyle's boyfriend Tom Marquand after his partner rode her 100th winner of the year at Chelmsford on Thursday

He was a remarkable horse, the horse of a lifetime. He'll be well celebrated because he captured the imagination; people loved his style of running and they knew he was a true hurdler
Owner Peter Deal following the sad passing of 1997 Champion Hurdle hero Make A Stand at the age of 28

What an honour to host the Peter O’Sullevan Award lunch yesterday. Francome & Bremner were off the charts!
The award went to a man who’s done so much for the sport - after my switch from football was the kindest, most generous (& patient!) mentor. The incomparable @broughscott pic.twitter.com/aaE3IERZSk

I'm 61 and still ride them out, school them and everything else. I've income from other stuff and don't do this for money –  I do it because I love it
Pat Murphy, who has just two horses and no staff at his Berkshire yard, explains his passion for training racehorses after taking out his licence again

I get goosebumps watching all these videos about these other amazing women. It feels unreal to be stood here
Khadijah Mellah after being named Young Sportswoman of the Year at a ceremony in London in recognition of her groundbreaking Magnolia Cup victory at Goodwood in August

Saddened to hear of the passing of Make A Stand at the age of 28. An amazing horse who won the Champion Hurdle, Tote Gold Trophy & Lanzarote Hurdle in the '96/97 season as a novice for my dad & owner Peter Deal. Glad he enjoyed a long & happy retirement. pic.twitter.com/RrXCcwqU7x

I certainly learned a new vocabulary from Jeff. It was a great grounding. And now I think if I'd gone to Alan before Jeff, it would have been a culture shock to join such a big yard. Alan can be quite fiery but Jeff was probably tougher. At Alan's, the bollockings weren't as bad
Wayne Hutchinson recalls time spent with Jeff King, who was a significant influence in making Hutchinson see things for what they were before joining Alan in his younger days

FIRST PUBLISHED 6:00PM, NOV 23 2019
I'm 61 and still ride them out, school them and everything else. I've income from other stuff and don't do this for money – I do it because I love it

'I was caught by the dream – and it's gone on to become a compulsion' 'I've come to Salisbury and it's turned into an effing jumps meeting!' The drugs bust, the stun gun and the most extraordinary Royal Ascot finish 'Life moves on' - Sir Michael Stoute looks forward after his most painful year Alastair Down is invited into the wonderful world of the truly unique Derby hero Steve Cauthen: 'I was bulimic at times - and at some point you crack'
Bookmaker
Price
E.W. Terms
bet365
Open Account
Ladbrokes
Open Account
William Hill
Open Account
Coral
Open Account
Paddy Power
Open Account
Betfair
Open Account
Sky Bet
Open Account
Sporting
BetVictor
Boylesport
888sport