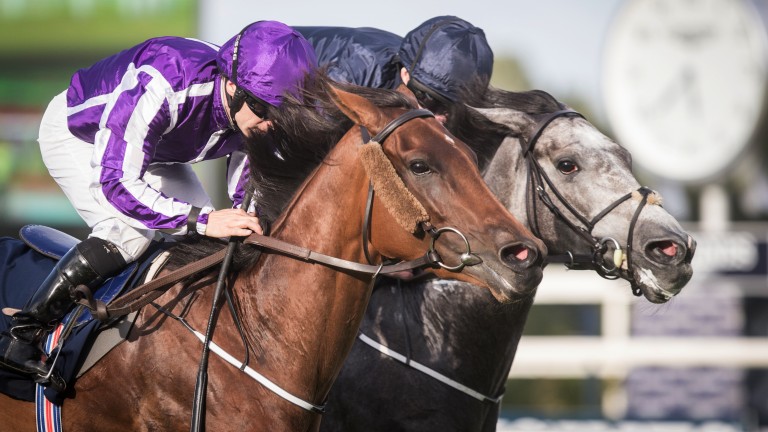 Hydrangea and Wayne Lordan edge out Winter to land the Matron Stakes
Patrick McCann
1 of 1
By Richard Forristal UPDATED 9:36AM, SEP 11 2017

It was billed as an epic encounter Ballydoyle would dominate with one or other of the elite firm's three previous Group 1 winners and the market reflected Aidan O'Brien's intimation Winter might just need the run.

On the first and last counts, the Coolmore Matron Stakes went to script. However, the €350,000 event threw up a curveball on the middle projection.

Hydrangea had clung on to deny Winter on their respective seasonal debuts in the 1,000 Guineas trial here in April. Since then, in two Classics, the Coronation Stakes and Nassau Stakes, she had failed to land a telling blow behind the summer's grey sensation.

Here, with Winter running out of puff at the death just as O'Brien had suggested she might after she'd missed work due to a bruised foot following her Goodwood heroics, Hydrangea bloomed.

Courtesy of a typically composed Wayne Lordan drive, she seized the opportunity to nail her nemesis on the line by a head in thrilling bout, with last year's runner-up Persuasive keeping on gamely to be third, three-parts of a length back.

It was Lordan's second Group 1 success for O'Brien, his first having come in the 1,000 Guineas aboard Winter, a filly he had ridden in each of her five starts to that point.

"Nothing surprises me any more," O'Brien replied jokingly when asked if he was shocked that the 20-1 shot had denied his easy-to-back evens favourite.

"I'm delighted for Hydrangea and for Wayne. She has been Winter's work partner all year so maybe she turned in and said to her, 'You can have this one today!'

"She'd beaten her here earlier in the year, so it's funny how it comes around again."

O'Brien proposed that a tilt at the Prix de l'Opera over ten furlongs on Arc weekend might now be on the agenda for Hydrangea, and he indicated Winter could yet have a cut at the €5 million main event at Chantilly.

"Hydrangea should stay further," he said of his third winner of this one-mile contest.

"She could be made for the Opera - she ran very well when fourth in the Nassau over that trip."

Of the gallant Ryan Moore-ridden runner-up, he said: "The lads will decide about Winter. She's in the Arc, so we'll see.

"She wasn't ready to go that distance today, but that will leave her right now."

Winter was unchanged at between 12-1 and 16-1 to land the richest race in Europe, and O'Brien indicated the Opera might also be an option for her should they decide to swerve the Arc.

Several firms, meanwhile, were suitably impressed with Hydrangea to slash her to 16-1 from around 66-1 for the QEII at Ascot.

"She's a very consistent filly, she's been running well all year," Lordan said of his willing partner. "It was nice for the filly as she's had her day now."

He added: "I didn't think I'd get there – Winter quickened away from me but she put her head down and she tries very hard."

Roly Poly, bidding for a Group 1 hat-trick here, weakened into sixth after making the running, finishing just ahead of another from the O'Brien yard, Rhododendron.

FIRST PUBLISHED 5:45PM, SEP 9 2017
Winter quickened away from me but she put her head down and she tries very hard