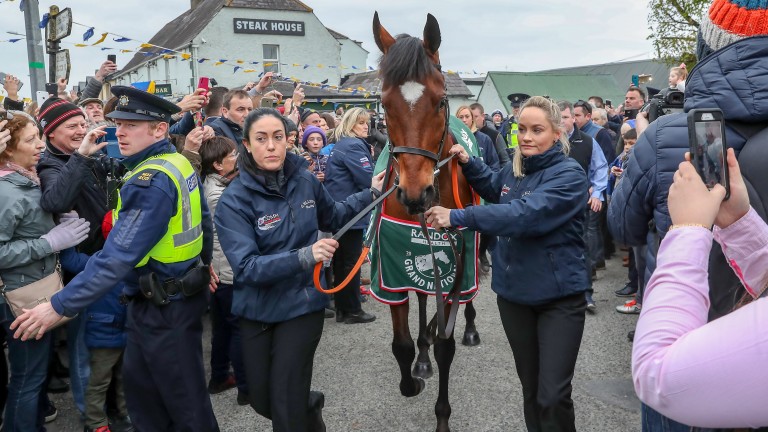 We have been here before, haven’t we? Same street, same village, same occasion, same horse. An overwhelming sense of deja vu should have smothered Summerhill, the small village in County Meath where Gordon Elliott grew up. Yet this wasn’t the same at all. This was a proper shindig.

Hundreds turned into thousands, cheers turned into chants and Tiger Roll turned into a legend never to be forgotten in racing folklore. It’s smaller he is getting, you know.

“He’s not very big, mammy, is he? George is almost as big as him,” says four-year-old Matt Smyth, sitting on his mother’s shoulders as Tiger Roll disembarks the horse box to a chorus of cheers at the end of the street. George, I find out later, is the Smyth family’s golden retriever.

The “little rat”, as owner Michael O’Leary described him before he became an A-list celebrity, has turned into the most precious little horse in racing, on Saturday becoming the first since Red Rum in the 1970s to win back-to-back Grand Nationals.

“I never thought we'd win a Grand National in my lifetime, never mind three of them in four years, it's phenomenal,” says O’Leary, the Gigginstown House Stud supremo who won the 2016 National with Rule The World and is now far more complimentary about Tiger Roll.

“People are comparing him to Red Rum," he continues. "That’s unbelievable for him to be mentioned in the same sentence as Red Rum. The atmosphere at Aintree was electric yesterday. There was a lot of expectation he'd win again and he was hot favourite, but very rarely does the hot favourite win the Grand National.”

They do now, which is why O'Leary, who is also boss of Ryanair, doubled his offer from last year to give those on the flight back to Ireland from Liverpool on Saturday evening two free drinks, and it’s why thousands turned up to see his history-making horse. Tiger Roll is surrounded by his winning connections and families at Sunday's homecoming
Patrick McCann (racingpost.com/photos)
"The horse is now officially a superstar,” says Michael’s brother Eddie. "I wasn’t here last year but the turnout is amazing, I can’t believe it. He deserves every single cheer he's getting.

“When he went to the front at the Elbow, I just closed my eyes. I couldn’t watch. For this horse to do the un-doable was unbelievable.”

As Elliott poses for selfie after selfie – he’s perfected the selfie smile, by the way – his assistant Aidan O’Ryan explains the emotion the pair went through watching the closing stages together in the middle of the track.

“Gordon was actually very calm during the race," relays O'Ryan. "We had 11 in the race so we were trying to find them all at various stages. It was a case of, ‘There’s another one gone, and another one.’

"From four out Dounikos was the only other one involved, then he made a bad mistake and dropped out, so it was a case of Tiger Roll or nothing.

“Madness. That's the only word I can use to describe what it was like from the last to the line. There was a heap of us there and we all jumped on each other. Myself, Jack Madden and Gordon made an absolute show of ourselves. It was a great release of emotion.”

There are plenty of emotions being released on the streets of Summerhill too as Michael O’Leary calls for three cheers for Elliott. He could have asked for 33 and the crowd would have obliged. They are terribly proud of him around these parts.

Let’s hear from a chap who went to school with Elliott.

“I was in the same class as Gordon – we went to St Michael’s in Trim,” says John Donoghue, a native of Killeen, a few miles down the road.

“I was here after Don Cossack won the Gold Cup and was in Dunshaughlin after Klairon Davis did the business in the Champion Chase, but nothing compares to this. I've never seen crowds like this welcoming home a horse.”

The selfies are slowing down so it seems the perfect time to grab Elliott.

"It's only still just sinking in," he admits. "I'm a proud Summerhill man. It's a great community here and I see a lot of familiar faces lining the streets, so to win the biggest race in the world with the same horse again is very special.”

Michael O'Leary feels a third Cross Country Chase win at Cheltenham in March would be the perfect swansong for Tiger Roll, but does the trainer think we'll be back in 12 months for a third National homecoming parade?

“Who knows, maybe," he replies. "This horse can do anything. We'll get this year’s celebrations out the way first, though. We’re going to enjoy tonight.”

And what does tonight consist of?

“Just a few quiet drinks in Shaw's, but I’m not going home until you buy me a pint, David,” comes the answer.

Elliott is still in Shaw's. If you’re reading this, the ATM was out of order.

FIRST PUBLISHED 8:02PM, APR 7 2019
I never thought we'd win a Grand National in my lifetime, never mind three of them in four years, it's phenomenal