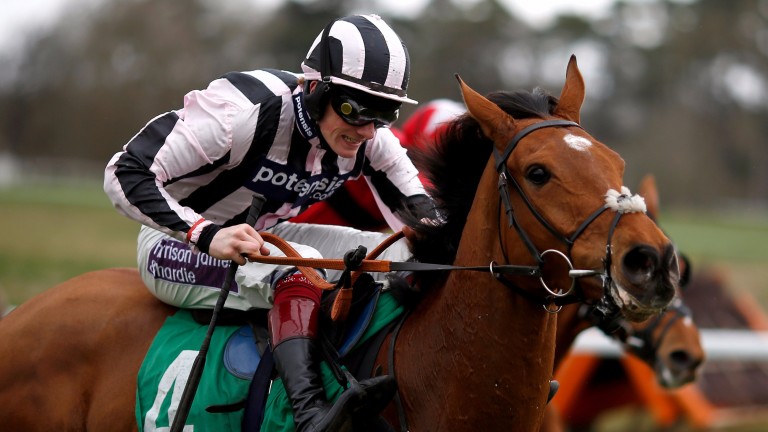 Conditional of the moment Tom Humphries has a chance of a first winner on terrestrial television when he partners the in-form and lightly weighted Templeross for his boss Nigel Twiston-Davies.

The 23-year-old's career has taken off since he joined Twiston-Davies in the summer, and he has enjoyed three wins from only five rides, including on Arctic Gold in a Pertemps Qualifier on Sandown's Tingle Creek card and Florrie Boy at Uttoxeter three days later.

Humphries can claim 10lb when riding for his own stable until he has had five winners, and Twiston-Davies hopes such a hefty allowance might swing what looks a tight handicap in the favour of Templeross.

Anteros was a 20-1 chance when he bolted up in soft ground at the last Cheltenham meeting, having been kept wide by Paul Townend. He merits plenty of respect despite quicker conditions.

Philip Hobbs has won three of the last nine runnings, most recently with 33-1 chance So Fine. He saddles For Good Measure for JP McManus.

Improvers to the fore

This is often a race for a young improver. Five and six-year-olds have won six of the last ten runnings, and they include Fair Along, Time For Rupert and At Fishers Cross.

Paul Nicholls, trainer of The Eaglehaslanded
He's probably a bit high in the handicap, but he's very fit and well and he has to start somewhere.

David Pipe, trainer of Herbert Park
He's been running very well and will like the big, galloping track, so hopefully he will run a decent race.

Philip Hobbs, trainer of For Good Measure
He will be suited by returning to three miles and should hopefully run very well.

Colin Tizzard, trainer of Valhalla
He's very consistent in this type of race and will win one in a minute, but if not he could be switching to novice chases as he's already won a point-to-point. We'll see how he gets on here. He's had a bit more of a break and is going beautifully on the gallops.

Christian Leech, assistant to his wife Sophie, trainer of Anteros
He's come out of his race really well and the timing is good with the 27-day gap. He's very versatile with regard to ground and the 7lb rise is fair enough as he won very easily. Paul knows him well now and we are confident he will go close.

Dan Skelton, trainer of L'Aigle Royal
I think the trip will really suit him and I’m hoping it will bring out some improvement in him. He ran well at Kempton and just found two a bit better on the day. He’s got an each-way chance.

Nigel Twiston-Davies, trainer of Templeross
He's a nice, progressive horse and we are having a go with a good 10lb claimer who rides very well and has a great record this season.

Kim Bailey, trainer of Patsys Castle
Any rain would be bad news as he's a true top-of-the-ground horse as we saw at Wetherby, where even good to soft was too soft for him. But the owner is flying over from Gibraltar, so we will keep our fingers crossed.