'Some racecourses, to put it quite bluntly, need to pull their finger out'

Tom Kerr investigates the thinning ranks of those who own racehorses 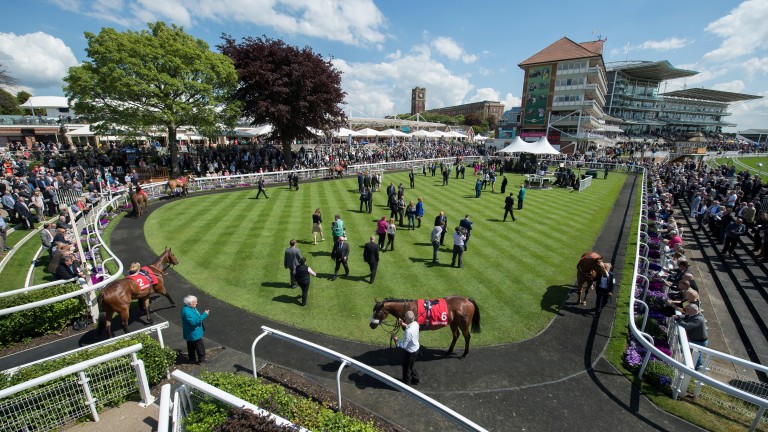 Giving all owners access to the paddock is a huge part of a good raceday experience
Edward Whitaker
1 of 1
12:35PM, MAY 21 2017

Racehorse ownership's most promising area of growth, at least outside of the ultra-wealthy, is syndicates and partnerships, a model that has been successful in other parts of the world, notably Australia, which in 2015-16 had almost 80,000 people involved in ownership (up from 68,000 a decade earlier).

Yet while syndicates grow, drawing owners to racecourses in larger numbers than ever before, many tracks are unable or unwilling to adjust to the new reality. Speaking to those who run and join syndicates, the most common complaint relates to securing access to the paddock before racing.

One syndicate manager recounted taking 25 members – each of whom had paid £3,000 to be part of the venture – to Kempton for a recent Wednesday evening meeting. The track was typically underpopulated, but nonetheless only 14 owners' tickets were forthcoming from the racecourse. The result? "I had to piss off almost half the owners," the syndicate manager says. 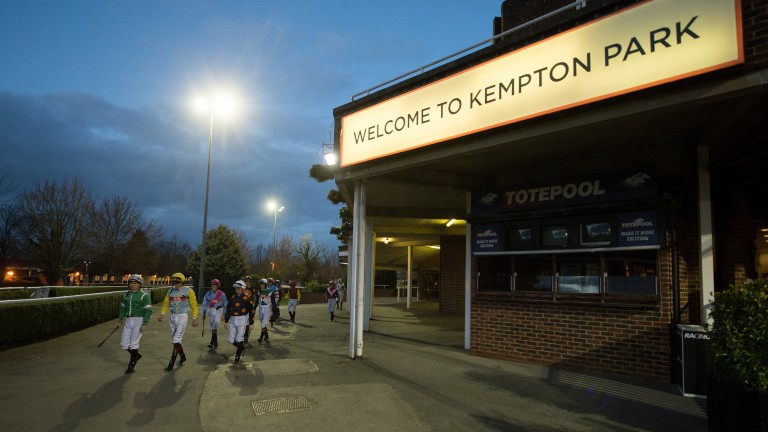 Racing on Wednesday evening
Edward Whitaker (racingpost.com/photos)
"It's easy to forget how much people spend in syndicates," says Adrian King, who runs Henacre Racing Club, a new low-cost syndicate designed to get new owners into the sport. "We've got one guy who works in Tesco for a couple of days a week to support his pension and allow him to be involved in racing.

"Some of the racecourses are brilliant. But some of them, to put it quite bluntly, need to pull their finger out."

The ROA recently piloted a scheme at Lingfield and Windsor where syndicates could apply for up to 50 extra paddock passes (health and safety restrictions allowing) and are in talks with racecourses about rolling it out across Britain.

Although some racecourses are limited by their facilities, ensuring syndicate members have access to the paddock is so vital to the experience tracks must do everything in their power, including redevelopment work, to allow access. To do otherwise is to deprive owners of the most precious part of racehorse ownership: being part of the action.

4. ADMINISTRATION AND SIGNING UP

A really slick registration process for racehorse owners might not be the sexiest advert for the sport, but it shouldn't be underestimated just how burdensome, unappealing and antiquated the byzantine setup in use right now is.

"The current system is very much paper-based, so it's pretty much been in place all along," says Wayman. "Right now if you want to become an owner we would ask you to complete a significant number of registration forms. That's very time-consuming, and there's an element of duplication where you are asked the same questions twice or more."

After signing up, owners don't get a glossy welcome pack congratulating them on joining the exciting world of racehorse ownership, as might be expected. Instead they get "a little bit of administrative stuff", says Wayman, and then bills, bills and more bills. As a reward for signing up to spend tens of thousands a year, it is more than a little underwhelming. 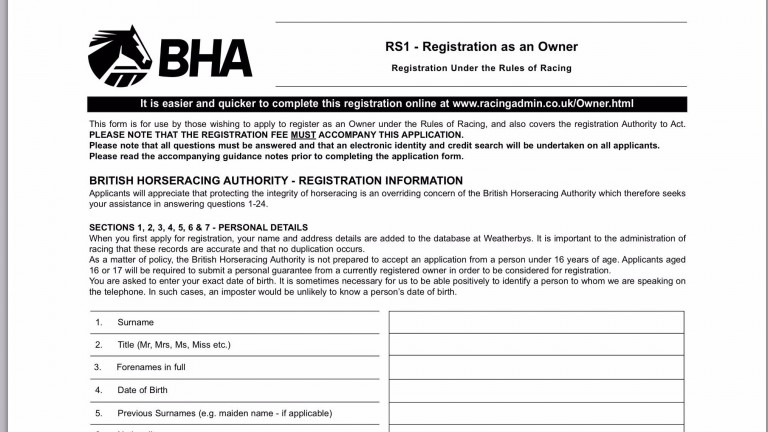 One of the many forms new owners are confronted when getting involved with a horse.
Racing Post
This is an area the BHA and Weatherbys, which provides the sport's administrative systems, are hard at work on. Originally slated for a spring launch but now pushed back to July, a new digital system is being designed to allow prospective owners to sign up in just 20 minutes and the applications to be processed within a working day.

Owners will also have access to the racing calendar, whereas at the moment they would need to subscribe to the programme book (another bill to pay) if they wish to review race options for their horse. The many fees levied on owners are also being reviewed, with £150,000-worth abolished and others condensed into a single annual bill.

All this is vital, particularly in terms of making ownership attractive to those generations used to seamlessly managing their life from the comfort of a phone or laptop. "It's about providing a customer friendly service, in the same way as the banks have moved almost everything online," says Wayman.

"The average owner goes racing five times a year with his horse," says the ROA's Liverton, "so effectively the industry has got to – got to, got to – give them action the other 360 days."

There is no area with greater potential to enhance ownership than communication, with the full range of digital platforms offering racehorse trainers and syndicate managers unprecedented ability to share information, pictures and videos with owners. At the moment, in this respect trainers and syndicate managers unsurprisingly run the gamut from garrulous to JD Salinger.

When trainers are good, the approval from owners is table-rattling. Matt Pryce, who began as a syndicate member at Jeremy Gask's before going on to create his own partnership, explains what made his experience so positive: "I always felt you got treated the same if you owned the ear of a 50-rated horse or you had Medicean Man. They provided weekly audio updates, videos and a feeling you were involved in decisions. The yard also do a weekly newsletter so you can support their other runners too." 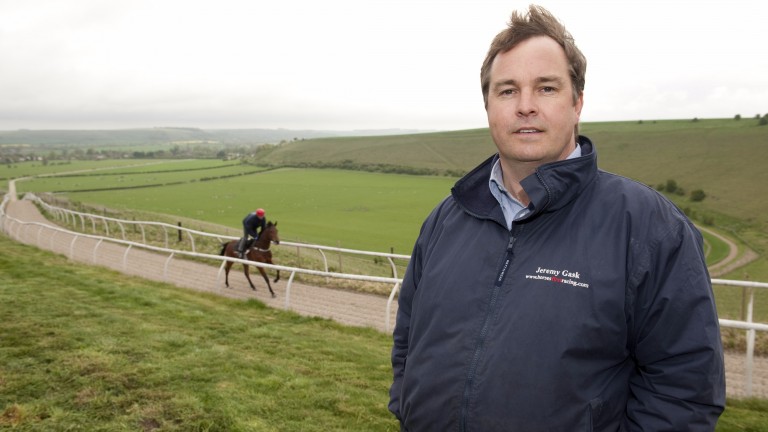 Jeremy Gask breaks new ground with Medicean Man in Doha on Saturday
Edward Whitaker
Communication like this makes an enormous impact and the sport as a whole can do much to help trainers. Many don't have the technical know-how to take advantage of the digital tools at their disposal, something which the ROA's Liverton suggests should become part of their training modules and revisited frequently to ensure the latest technology is understood and being utilised.

These days it is the work of a moment for videos and audio updates to be pinged off to owners and the sport should be looking at working with technology companies to develop custom software and apps to make the process as simple and rewarding as possible.

Racing should also be thinking about where it wants to be in ten, 20 or 30 years' time. One day, owners should be able to tap a button on their smart device and pull up a live stream of their racehorse, with details of workouts, schedule and upcoming targets all at their fingertips.

Working hard to get ahead

Owning racehorses is a rewarding experience that can provide enormous pleasure. Its success over the decades, despite all the frustrations and expenses, is testament to a product with genuine staying power. Yet racing can't take owners for granted, nor assume the model that once worked will do so into the future. 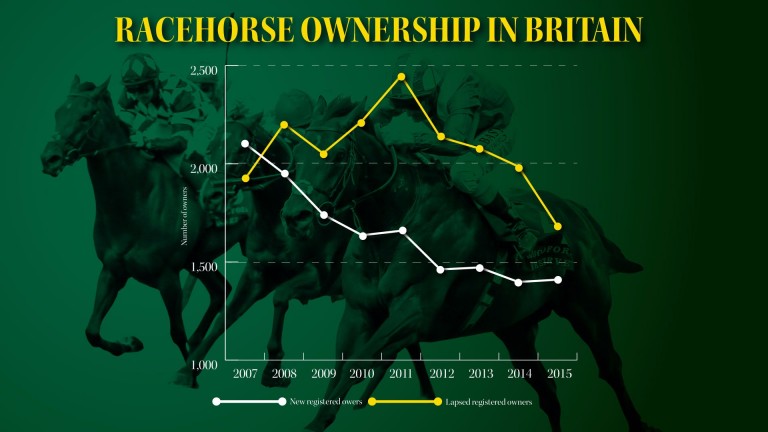 Racing needs to do more than just address the concerns of current and former owners. It must also make the product appealing to a younger generation of prospective owners that has higher expectations and more choice on where to spend their leisure pound than ever before. Racing is working hard to stand still right now. It must work even harder to get ahead.

Interested in becoming an owner? There are a bewildering array of sources out there professing to give you the key information but these are the must-visit sources in our book:

Roa.co.uk
The Racehorse Owners Association has produced an extensive guide to racehorse ownership which can be downloaded via its website. The guide takes prospective owners step-by-step through the (currently very complex) process of joining the sport, outlining the different types of ownership, how to buy a racehorse, the likely costs of having a racehorse, navigating the byzantine registration system and lots more.

Inthepaddock.co.uk
Launched this year by Great British Racing, Inthepaddock.co.uk is designed to be racing's answer to price-comparison websites so familiar from booking flights, holidays and buying insurance. Type in your postcode and Inthepaddock will search for syndicates near you. Users can then further refine the search by specifying minimum cost per share, code (Flat, jumps or both), average number of members, contract term and number of horses per syndicate. Unfortunately, there's no way to search by user rating, number of winners, strike-rate or other performance-based criteria but Inthepaddock still represents a big step forward from the old way of doing things.

Racehorsetrainers.org
Naturally, the biggest question about becoming an owner, especially a sole owner, is what trainer will I send my horse to? The official website of the National Trainers Federation contains a directory of all British trainers that can be searched by county. It's not exactly user-friendly – trainers' first names aren't offered – but will help prospective owners work out who their local trainers are.

Racingpost.com
A wealth of news and statistics means would-be owners can research the record of local trainers and make an informed choice who should get their horse. Once that's done, it's a good idea to check out the trainer's website, which will give you a feel for their ownership modus operandi – if a trainer has an irregularly updated or old-fashioned site, you're probably not going to receive daily video updates about your pride and joy.

FIRST PUBLISHED 6:00PM, MAY 20 2017
We've got one guy who works in Tesco for a couple of days a week to support his pension and allow him to be involved in racing