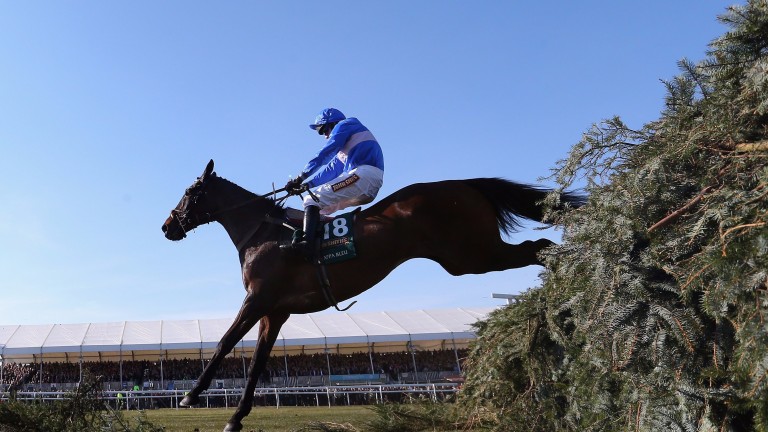 A look back at Paul Moloney's remarkable Grand National record...

State of Play - 4th (2009), 3rd (2010), 4th (2011)
When you think of Paul Moloney and the Grand National you think of patient, hold-up rides. But different tactics were employed at the start of his remarkable sequence, when State Of Play raced prominently and even jumped the second-last in a share of the lead before finishing fourth. State Of Play would only race on four further occasions but, remarkably, three of those appearances would come in the Grand National where he would twice more bag a top-four finish under Moloney.

Cappa Bleu - 4th (2012), 2nd (2013)
Lightly raced since winning the Foxhunter at the 2009 Cheltenham Festival, Cappa Bleu was a tad unfortunate on his first National attempt as Moloney found himself further back than he would have wanted when hampered at Foinavon on the first circuit. Cappa Bleu took extremely well to the course and followed up an excellent fourth with a staying-on second – Moloney's highest placing in the race – behind Aurora's Encore.

Alvarado - 4th (2014) 4th (2015)
Such a stout stayer was Alvarado that even the Grand National – the longest race in the calendar – seemingly failed to provide a sufficient test of stamina. Held up in rear on both occasions, Moloney picked off tiring rivals late on as his mount just kept on galloping to secure connections more than £100,000 in races they never looked like winning.

Buywise - 12th (2016)
Moloney's remarkable record of hitting the frame in the Grand National was snapped at seven when Buywise could finish only 12th. However, safely negotiating the course on such a notoriously clumsy jumper as Buywise was an achievement in itself.