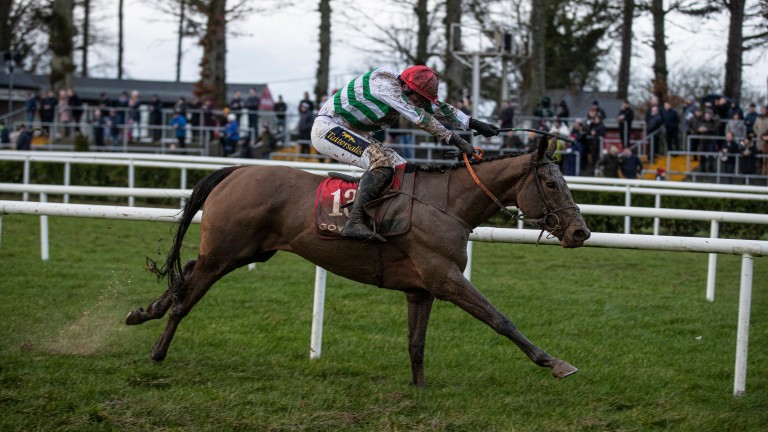 Jamie Codd is relishing the chance to find out just how good wide-margin Gowran bumper winner Queens Brook is when locking horns with red-hot favourite Appreciate It in next week's Weatherbys Champion Bumper.

The Gordon Elliott-trained mare has been well backed in recent weeks and is now priced between 6-1 and 8-1 for the concluding contest on day two, having been introduced at 25-1 with some firms after her impressive 21-length win at Gowran.

The leading amateur rider, seeking a remarkable tenth Cheltenham Festival victory at this year's festival, is hoping to win the Champion Bumper for a third time after successes on Fayonagh (2017) and Envoi Allen (2019).

"I'm delighted to keep the ride on Queens Brook," said Codd. "She won very well at Gowran and I'm excited to see how good she is."

He added: "She stays well and in time can step up in trip. She's a winter mare and I won't mind a bit of soft ground for her on Wednesday."

He looks to have a live chance of completing a double in the National Hunt Chase with experienced ten-year-old Ravenhill, who had initially been considered a likely contender for the Kim Muir but will now take on Carefully Selected on day one.

"He's a second-season novice sneaking into the race," he explained. "He's been second in a Kerry National, fifth in a Galway Plate. I think he'll stay and give me a good spin."

He added: "Carefully Selected looks like he's the one but I wouldn't swap my lad for much in the race. There could be another unexposed horse to come through on the day but it's hard to say what that is at this stage."

A 3lb drop in the handicap may have frustrated connections of last season's National Hunt Chase hero Le Breuil in terms of getting into the Randox Health Grand National, but a mark of 145 means Ben Pauling's chaser can take his chance in the Fulke Walwyn Kim Muir Handicap Chase.

"It's fantastic to be reunited with him at Cheltenham," said the rider chasing a fifth win in the race.

"It'll be a fairly condensed handicap and he's not going to be giving away that much weight to others. Ben's horses seem to be in good form so I'm really looking forward to it."

Codd is currently without a ride in the St James's Place Foxhunter Chase, the only amateur riders' race at the festival he has yet to win.

Asked what horse represented his best chance of a winner at next week's festival, Codd replied: "All three of my rides have chances and it's hard to say which, but I'm really looking forward to Queens Brook and finding out how good she is."

Keith Donoghue: two miles no trouble for Envoi Allen - he would win the Champion

FIRST PUBLISHED 6:25PM, MAR 7 2020
Carefully Selected looks like he's the one but I wouldn't swap my lad for much in the race