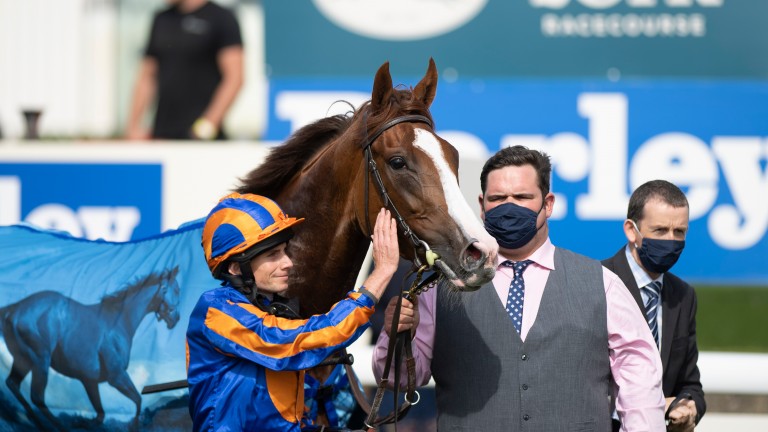 Love stands proud in the winner's circle after a super display on the Knavesmire
Edward Whitaker
1 of 1
UPDATED 6:14PM, AUG 20 2020

Love impresses with each run against her own sex, but the Arc will be a totally different proposition, particularly if the ground comes up soft.

Plus, there is no evidence to suggest Enable's no longer the force of old. John Gosden told everyone in the build-up to the Eclipse she would need the run, and what more could she have done against markedly inferior opponents in the King George?

She went off 1-2 favourite at Longchamp last year which is a measure of how most people rated her chance.

Enable was kept in training for one reason only this year, to win an unprecedented third Arc. So far so good.
Richard Birch, tipster

Three-year-old fillies have an excellent record in the Arc and Love will go to Longchamp with outstanding claims after another flawless performance at York.

People might want to crab her form and point to the fact she is yet to come up against the calibre of opponent she will face in Paris, but it is the manner of her victories that really excites.

The market has it right favouring Love, who will be getting all the allowances, and although Enable will be trained to the minute for her date with destiny, her age is a big concern.

I was a little underwhelmed with Love, not so much with the way she put away inferior rivals as by her wandering first one way and then the other off a true line.

Perhaps that is splitting hairs, but I found it more than a little surprising.

Love is yet to meet any of the principals from the Prix de Diane – the fourth from that race, Raabihah, looks sure to improve over 1m4f – while Ghaiyyath's performance in the Juddmonte arguably did more for Enable's form.

While both fillies might have their hands full with Wednesday's Juddmonte International winner at Longchamp, I take John Gosden's decision to miss York altogether as a positive sign that the Clarehaven team feel the Arc dream is a realistic one for Enable.
Scott Burton, France correspondent

Watch Love run away with the Yorkshire Oaks

FIRST PUBLISHED 5:41PM, AUG 20 2020
People might want to crab her form but it is the manner of her victories that really excites

Dual Group 1 winner brings 'ray of sunshine' to patients at York hospice York joins major tracks in backing Savill proposals - but not before 2024 Racing is facing a perfect storm - so why is there no urgency from its leaders?