How did world's richest race come into being and how does it work? 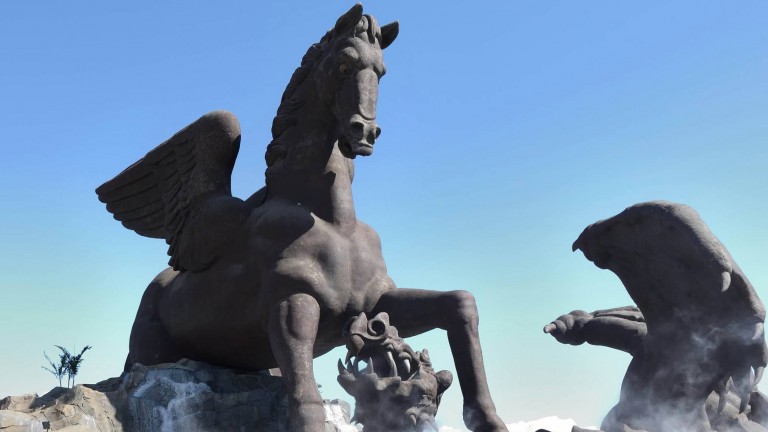 Pegasus World Cup: second running of richest race on the planet is worth $16m at Gulfstream Park on Saturday
Unknown
1 of 1
By Nicholas Godfrey in Miami 6:19PM, JAN 27 2017

The Pegasus World Cup was officially unveiled in May last year when racetrack owner Frank Stronach revealed proposals for a richly endowed dirt race at Gulfstream Park in Florida the following January.

Stronach had big ambitions for his new concept. According to the Pegasus website, he envisages "an industry game-changing catalyst to modernise the sport and engage a new generation of fans".

With a $12 million purse paid for from owners' fees under a revolutionary entry procedure, the nine-furlong contest immediately overtakes the $10m Dubai World Cup as the world's richest race.

It's worth a fortune - but what else is special about it?

According to Bob Baffert, the new contest represents 'thinking out of the box' and the entry procedures for the inaugural race were certainly novel. Twelve 'stakeholders' each paid $1m to purchase a position in the starting gate for an unspecified horse. The entry then had the right to race, lease, contract or share a starter, or sell their place in the gate.

The Pegasus winner takes home $7m, with second and third getting $1.75m and $1m respectively. Every other horse will receive $250,000, with Pegasus 'stakeholders' also receiving an equal share in the net income from the Pegasus (i.e. profit from betting handle, sponsorship and media-rights revenues). Estimates for the worth of such 'extras' have varied markedly, anywhere between $100,000 and $300,000.

Interesting. And has racing embraced the idea?

Although the concept was met with a huge amount of scepticism, the first race was made as soon as connections of Arrogate and California Chrome signed up for a repeat of their epic Breeders' Cup battle, although their respective draws, on the inside and wide outside, has put the cat among the pigeons.

The lack of international involvement has led to some snide comments outside America, but the fact remains that a full field of 12 is set to include six Grade 1 winners altogether – among them Classic third Keen Ice, who is no stranger to shock victories, having beaten Triple Crown hero American Pharoah in the Travers Stakes of 2015.

New races would normally have to wait two years before being eligible for any graded status but the Pegasus goes straight to Grade 1 level because in effect it has replaced the discontinued Donn Handicap (same conditions) and has inherited that race's Grade 1 standing.

Who else bought a place in the race?

Just one week after the entry procedure was announced, the Stronach Group announced that all 12 slots had been purchased. The initial stakeholders, who paid a $200,000 deposit last May, included California Chrome LLC and Coolmore, who later did a deal with Juddmonte to allow Arrogate to use their slot.

At the other end of the racing spectrum, pizza-franchise operator Dan Schafer, who has never owned a racehorse, also purchased a slot. "I'm the mystery man in all of this and I understand that," he said. "People are saying 'Who is this Dan Schafer guy?'" He's done a deal with the owners of War Story, who was eighth in the Breeders' Cup Classic.

A lively market in buying and selling places in the field has ensued: as well as Arrogate, Grade 1 winners Keen Ice and Noble Bird are also among those who have secured a place in the field thanks to a bit of wheeler-dealing as their owners did not feature among the 12 original stakeholders.

In a bid to promote racing 'clean', horses who run without the anti-bleeding medication Lasix receive a 5lb weight allowance. Of the 12 runners, only former Argentine-trained Eragon, who represents furniture magnate Jim 'Mattress Mack' McIngvale, has taken advantage of the concession.

Anything else of interest on the card?

The Gulfstream card also features the Poseidon Handicap, a $400,000 race designed as a Pegasus consolation race. Coolmore are part-owners of the favourite Stanford, who will run in the main event if Arrogate is a late scratching. Madefromlucky (for California Chrome) and Sea Raven (for Breaking Lucky) are also eligible for the Pegasus if their 'entrymate' is withdrawn.

FIRST PUBLISHED 6:00PM, JAN 27 2017
An industry game-changing catalyst to modernise the sport and engage a new generation of fans