Houtzen 'flying' in preparation for King's Stand at Royal Ascot 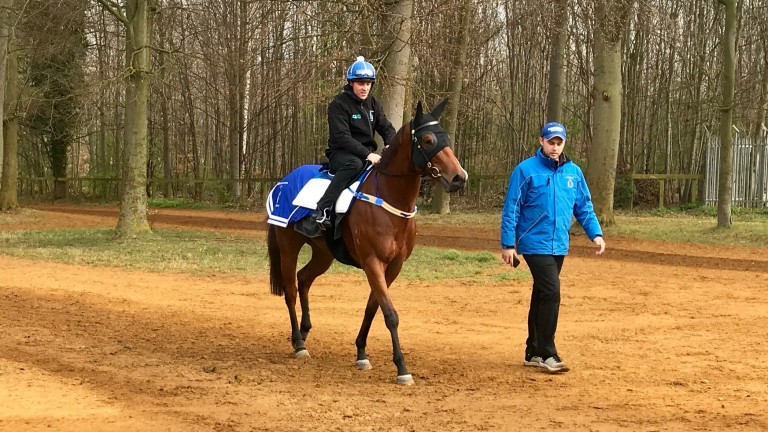 Houtzen and Trent Edmunds return from exercise
1 of 1
By Andrew Eddy/racing.com UPDATED 5:12PM, MAY 9 2019

The dream of taking on the best sprinters in Europe and even the US is inching closer to reality for the connections of flying mare Houtzen, who continues to please in her Royal Ascot preparations.

Rated a 25-1 chance in some markets to win the 5f Group 1 when markets on the race opened this week, her connections are not only looking forward to her European debut in the King's Stand Stakes at Royal Ascot on June 19 but to what could lie ahead.

"She's absolutely flying," Aquis chief executive Shane McGrath said on Wednesday of the galloper, who has already earned beyond A$2 million in stakes in Australia.

"She's probably been in Newmarket six weeks now with Acqume, who is a travelling partner, and they are both in tip-top condition.

"Everything is open if Houtzen runs well in the King's Stand.

"We wanted to take her on the international stage and let's see what she can do for us in Europe.

Blue Point: landed the King's Stand at Royal Ascot last year
Mark Cranham
"There are all sorts of options with her. There's the July Cup, the Prix de l'Abbaye, maybe even the Breeders' Cup depending on how she's running.

"Of course, you take it race by race but she is one that you can dream with if she's running well.

"The Aquis appetite for international competition is evident. If you've got one that's good enough, you've got to take a look."

The Australians at Royal Ascot

Choisir paved the way for Australian runners at Royal Ascot when becoming the first to win at the meeting in the 2003 King's Stand Stakes, a success he remarkably followed up with another in the Golden Jubilee four days later.

That historic double set the template for the now commonplace tilts at Royal Ascot's sprints by Australian runners, which have yielded six victories in total, including three of the four runnings of the King's Stand Stakes between 2006 and 2009 with Takeover Target, Miss Andretti and Scenic Blast.

However, it was the legendary Black Caviar's victory in the 2012 Golden Jubilee that provided Australia with its greatest Royal Ascot moment.

An estimated 6,000 Australians packed the Ascot grandstand to watch their beloved wonder mare – who had 21 victories at home under her belt – take on the best Europe had to offer and, despite a heart-stopping few seconds when jockey Luke Nolen prematurely eased her inside the final furlong, she scrambled home in a dramatic finish to send the visiting fans into raptures.

As the table below shows, the success rate has dropped off in recent years, with Brazen Beau's close second to American runner Undrafted in the 2015 Diamond Jubilee the best effort from the nine Australian horses who have run at Royal Ascot since Black Caviar's famous victory. 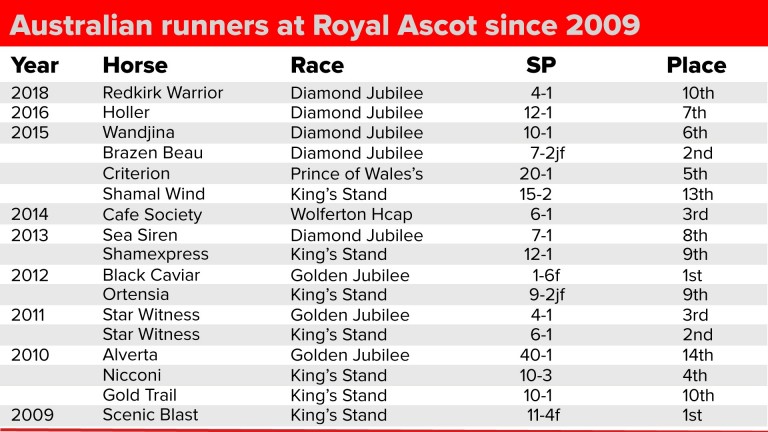 FIRST PUBLISHED 6:52AM, MAY 9 2019
There's the July Cup, the Prix de l'Abbaye, maybe even the Breeders' Cup depending on how she's running