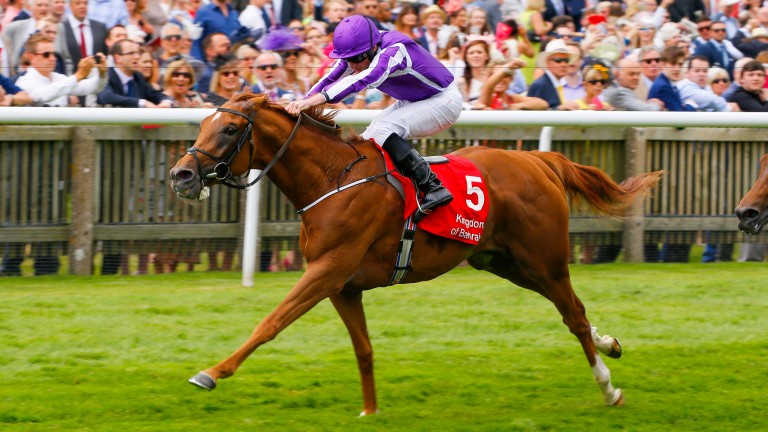 Housesofparliament: one of an army of Aidan O'Brien's string to join son Joseph for hurdling campaign
Mark Cranham (racingpost.com/photos)
1 of 1
By Tony O'Hehir 6:11PM, NOV 2 2016

Joseph O'Brien is 5-2 with Paddy Power and 4-1 with Betfred to train the winner of the JCB Triumph Hurdle at the Cheltenham Festival in March after it emerged yesterday that a number of recently gelded three-year-olds trained for the Flat by his father, Aidan, are expected to join him for a hurdling campaign.

Housesofparliament, who finished third in the Ladbrokes St Leger, is 16-1 favourite for the Triumph with Paddy Power while others set to go hurdling include Sword Fighter, winner of the Queen's Vase at Royal Ascot and the Group 2 Curragh Cup, The Major General, a winner at Listed level, and maiden winners Bhutan, who won his only start, beating Housesofparliament at Leopardstown in April, and Tree Of Knowledge.

The group also includes Big Ben and Landofhopeandglory who are entered for a juvenile hurdle at Fairyhouse on Monday.

O'Brien, who will have his first Breeders' Cup runner tomorrow when Intricately tackles the Juvenile Fillies Turf, said yesterday: "I've got Landofhopeandglory and Big Ben and we've been happy with the way they've been schooling. They are entered up and will be running within the next couple of weeks."

Landofhopeandglory, who won a maiden at the Galway festival on his debut in 2014, failed to win again but was placed at Listed and Group 2 level while Big Ben, a half-brother to multiple Group 1 winner, Attraction, has only raced twice on the Flat –winning a 1m2f maiden at the Curragh in August on his second start.

O'Brien, who started training in June, gained all the plaudits for masterminding last season's Triumph Hurdle victory of Ivanovich Gorbatov, who won under his father's name.

FIRST PUBLISHED 6:09PM, NOV 2 2016
They're entered up and will be running within the next couple of weeks