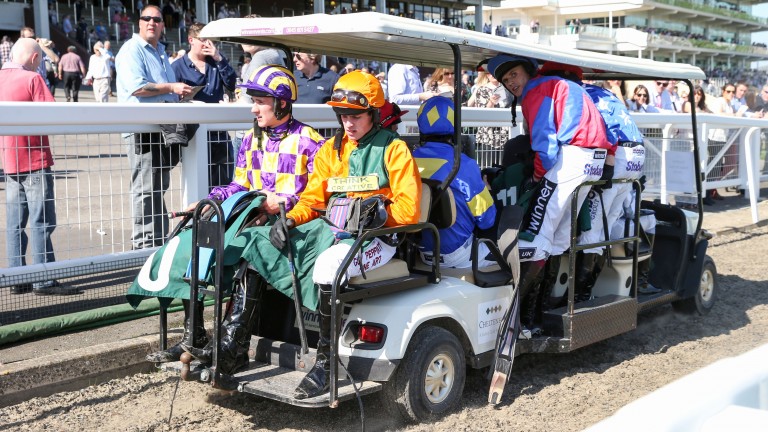 Jockeys are transported back to the weighing room after the third race at Cheltenham, where temperatures hit 25C
John Grossick (racingpost.com/photos)
1 of 1
By Andrew King and David Baxter UPDATED 8:35AM, APR 20 2018

Unseasonably hot weather caused the abandonment of a long-distance chase at Cheltenham on Thursday on welfare grounds, a decision that divided opinion among racing professionals.

The 3m2f Jrl Group Mares' Handicap Chase, due to be staged at 3.50, was abandoned following consultation with trainers, jockeys and veterinary staff, with some of the runners who had competed in previous races found to be suffering from heat stress.

Prior to the abandonment the veterinary officer had reported Banjo Girl and Angels Antics, who raced in the first race, and Tara Mist, who ran in the second, to be suffering from heat stress post-race.

Dame Rose, who finished fourth in the first race, died from a heart attack. The BHA said it was not known whether her death was caused by heat stress and a post mortem would be conducted.

Temperatures hit 25C at the track, and there was a general feeling that the sudden shift to warm weather after a very wet and cold winter was causing acclimatisation problems for the horses.

But that view was not shared by all, with some of the trainers who were due to have runners in the race left unhappy at being denied the chance to run, Donald McCain claiming the decision set a "dangerous precedent" for the sport.

He said: "I think that of the number of decisions they could have made the worst one has been put into effect. If they're going to abandon one race the lot should go, but I'm in favour of racing continuing in any case.

"This decision sets a dangerous precedent for summer jumping and all the summer nationals and the whole thing is not good for racing as a whole."

Maid Of Milan was due to contest the race for Charlie Mann, who was also unimpressed by the decision.

He said: "We've only spent five months waiting for the ground to come right for Maid Of Milan and they abandon the race. It doesn't matter whether the race is over two miles or three miles, it's basically the same, and the stewards have made the wrong decision, in my eyes."

Fergal O'Brien was another trainer affected, and echoed Mann's sentiments. He said: "The decision that has been made is bordering on the ridiculous. We wanted Jenny's Surprise to run but we're not going to get that chance. There is an Irish horse in the race. Who is going to compensate the horse's connections?" 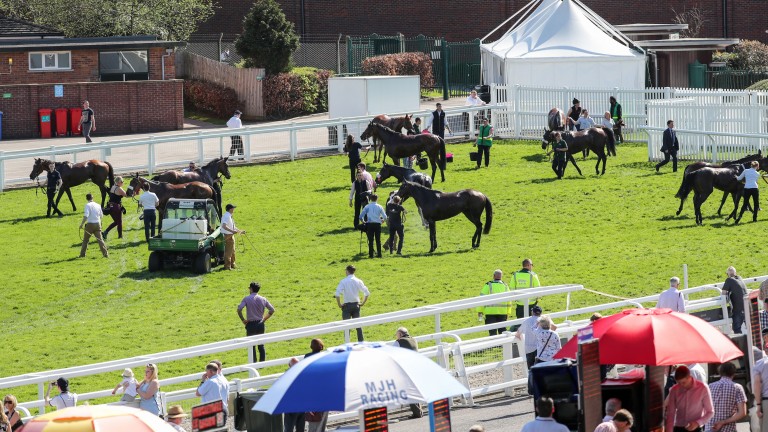 Horses are cooled at Cheltenham as the bookmakers seek shade under their umbrellas
JOHN GROSSICK (RACINGPOST.COM/PHOTOS)

Jockey Club Racecourses said owners of all the declared horses who were due to run in the abandoned race would receive compensation towards the travel expenses they would have incurred.

Champion jockey Richard Johnson was among those involved in the consultation process prior to the abandonment, along with fellow jockeys Harry Skelton and Noel Fehily, and trainers David Pipe and Michael Scudamore. Johnson felt conditions were not safe for the longest race on the card.

He said: "We went into the inquiry feeling very cautious about the circumstances and the three-mile chase did not go ahead due to those circumstances.

"I think this has got more to do with the shock of going through such a miserable wet and cold winter to high temperatures in a matter of days, more than anything else.

"In the end the vets were happy racing went ahead with the short delay so the jockeys were happy to ride on."

Dan Skelton, who saddled a winner on the card with Stylish Dancer, also felt the right decision was reached. He said: "This whole season for jumpers has been about unbelievable weather, completely out of character. We do have to act accordingly.

"I do think the right decision's been made. Obviously time will tell if it definitely has or not. The main focus is: why are these horses doing this, rather than should we be cancelling racing. You're going to get hotter days than this when horses race in the summer.

"I think the problem is they're coming out of the winter, a fantastically cold, horrible winter, and their coats have still got that bit of growth on them. Horse's coats in the summer are like seal skins, there isn't really any hair to talk of. I think you're finding they're overheating because of the time of the year, rather than the extreme temperature." 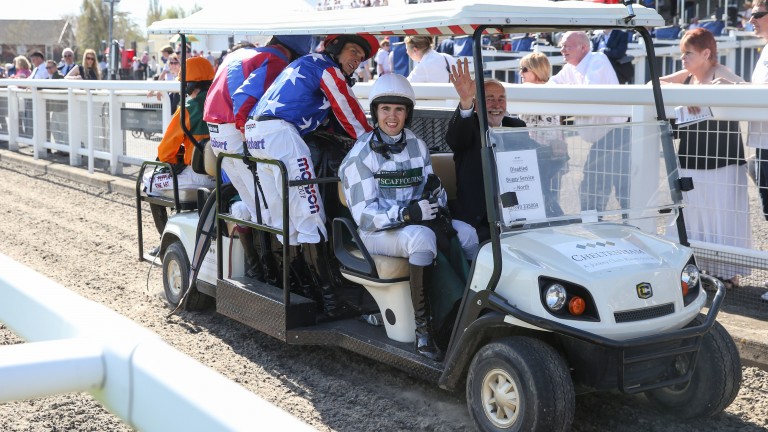 Conditional Daniel Sansom gets to ride shotgun after finishing fourth on Jubilympics in the mares' handicap hurdle
JOHN GROSSICK (RACINGPOST.COM/PHOTOS)

Dame Rose's trainer Richard Hobson was left devastated by the mare's death. "She was our first Graded winner and hadn't achieved the half of what she was supposed to achieve, as she was going to go chasing," he said.

"She would have been a cracking broodmare. We've been hit hard. We're a small team and when you lose one as good as her it's really hard to take. She ran a fantastic race today and we've got to think about the good days we had with her."

Explaining the decision to abandon the race, stipendiary steward Simon Cowley said: "We've been monitoring the situation throughout the day because of the heat. We put measures in place to water the horses after each race.

"The jockeys have been telling us a lot of the horses having been finishing tired, unexpectedly tired. We suspect this is due to the fact they're not acclimatised to this weather off the back of a very cold, wet winter. So bearing that in mind we inquired into the general situation of the heat and its effect upon the horses.

"With a 3m2f chase coming up, having listened to all the trainers, jockeys and having veterinary input, we decided that running such a race in these particularly unusual conditions, given that the horses don't appear to be acclimatised, was too much of a risk to take on board." 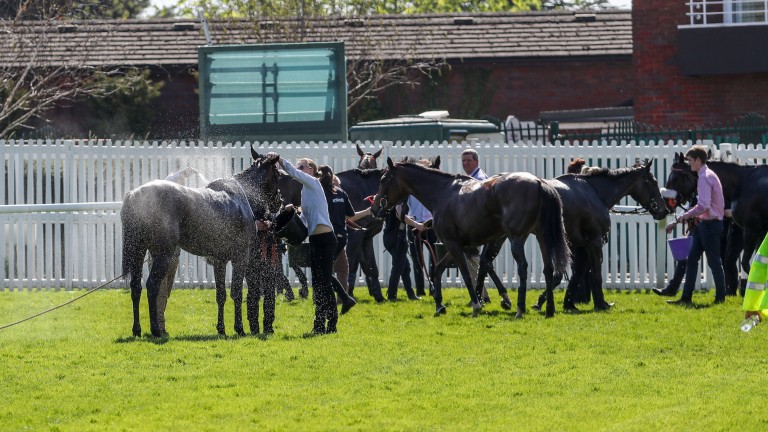 Horses are cooled down after the finish of race three at Cheltenham
John Grossick (racingpost.com/photos)

The remaining three races went ahead as planned, with jockeys dismounting at the finish so the horses could be taken straight to the racecourse stables, while the riders themselves were transported back to the weighing room in buggies.

BHA spokesman Robin Mounsey said: "While we appreciate this decision may be frustrating to some, it was discussed at length with vets, jockeys, trainers and the racecourse and we hope those affected will understand the decision was taken with welfare in mind. The safety and health of our participants is the number one priority for everyone involved in the sport.

"In unseasonal weather such as this, races run over longer distances may carry an increased risk of horses becoming too hot, especially when the heat has come on so quickly and horses haven’t had a chance to acclimatise.

"Hot weather provisions have been put in place across the country, such as extra water and tired horses not returning to the parade ring after races, but the decision was made to cancel this one race as an extra precaution.”

FIRST PUBLISHED 4:19PM, APR 19 2018
Running a 3m2f chase in these unusual conditions, given that the horses don't appear to be acclimatised, is too much risk to take on board