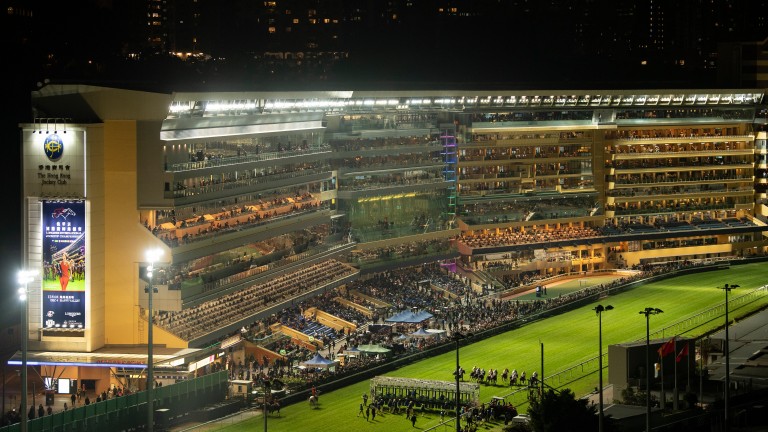 Racing in Hong Kong is slowly opening its doors again
Edward Whitaker
1 of 1
By Graham Cunningham UPDATED 10:48PM, MAY 12 2020

Nine weeks remain in the Hong Kong season and, with locally transmitted coronavirus infections down to zero for three weeks, racing is taking initial steps to open its doors again.

Voting members swelled the Sha Tin attendance to 776 last Saturday and, with various other members and guests returning at Happy Valley this Wednesday, a four-figure crowd is possible for the first time in several months.

All the action is live on Sky Sports Racing from 11.45 with total
prize-money exceeding £1 million as Zac Purton and Joao Moreira continue their ongoing title battle.

Three aces and a fault as Moreira hits back

Zac Purton serves, Joao Moreira returns and the odds about an epic five setter continue to shorten. So goes the short summary of the latest exchange in the HK jockeys' championship battle and the two men at the centre of it are still neck and neck.

Purton stormed four clear with a Happy Valley five-timer last Wednesday but Moreira fired back with a Sha Tin treble on Saturday and Purton leads by 114-113 ahead of Wednesday's return to the city track.

With 18 meetings left it is beginning to look like something around 150 could be the magic number and the need to stay out of the stewards' room is clear. Moreira picked up a one-day ban and a £7,800 fine for his winning ride on This One's For You on Saturday and will miss the midweek AW fixture at Sha Tin on May 27th as a result.

Newcomer Jerry a springer in the riding ranks

The dangers of overreacting to one day's racing are obvious but it looks like HK has found a smart new 10lb claimer based on Jerry Chau's debut double at Sha Tin on Saturday.

Chau is younger than most returning HK apprentices at 20 but gained a good grounding riding 77 winners in Adelaide and the way he drove Relentless Me and Buddies home was highly encouraging.

The young apprentice secures a double on his first day riding in Hong Kong as Buddies surges clear. #HKracing pic.twitter.com/reud18Z0Jr

New claimers aren't allowed to ride Happy Valley until the stewards consider they are ready for it but Chau's boss Douglas Whyte was understandably thrilled and Buddies Home's trainer John Moore is keen to use the youngster again soon.

History shows that a 10lb claim – reduced to 7lb after 20 wins – provides a golden edge in the right hands. Matthew Poon raced to 20 from just 112 rides at 14 meetings when he returned from Australia in 2017 and Chau is certainly one to watch as he embarks on a similar path.

Irish import on the upgrade

History also shows that making a winning debut in Class 3 at the Valley is tricky but Delightful Laos did so three weeks ago and the Dundalk winner – very well regarded when known as Now The King for Michael O'Callaghan – is back in action in the 3.50 at the Valley on Wednesday.

Delighted to see see Now The King (renamed Delightful Laos) win impressively on his first start for new connections in @HKJC_Racing we originally purchased him from his breeders @HoStud from the @Goresbridge2yos @tatts_ireland breeze up last May #buyirish #sellingwinners pic.twitter.com/rpCUvwb65h

With a short run to the first turn, being drawn low to middle confers a clear edge over 1650m (a mile). Hat-trick seeking Tangmere is ideally berthed in stall one under Purton, but it remains to be seen if he's as good as his latest emphatic success on a rare Valley wet track suggests.

By contrast, Delightful Laos looks full value for his 59-1 course and distance success on his debut for Tony Cruz as he travelled sweetly and showed a useful turn of foot turn of foot to settle matters under largely hands and heels riding from Derek Leung.

“Delightful Laos is going to improve again,” said Cruz. “It could be a bit of a short distance for him, as to me he’s more a staying type, but I believe he still has a great chance on Wednesday.”

Above to rise again with Moreira back aboard

There was seldom much love lost between Purton and Whyte when they were riding against each other but business is business and the old adversaries link up together when Good Omen – who gave Whyte a landmark 1800th career success in the saddle at the Valley in 2018 – lines up for a Class 3 (3.15) on Wednesday.

The former Glorious Goodwood winner has dropped a long way in the ratings and Purton is back aboard for the first time since his last victory just over a year ago but this looks a race with any number of dangers.

Blastoise and World Famous loom large on the list but don’t be surprised if Moreira has a big say on Above. John Moore’s gelding bolted up under the Brazilian at Sha Tin in March and can be given a pass for a short-odds defeat here on his latest start as Chad Schofield seemed to use him up much too far from home in a strongly-run race over a longer distance.

FIRST PUBLISHED 12:33PM, MAY 12 2020
It could be a bit of a short distance for him, as to me he’s more a staying type, but I believe he still has a great chance on Wednesday