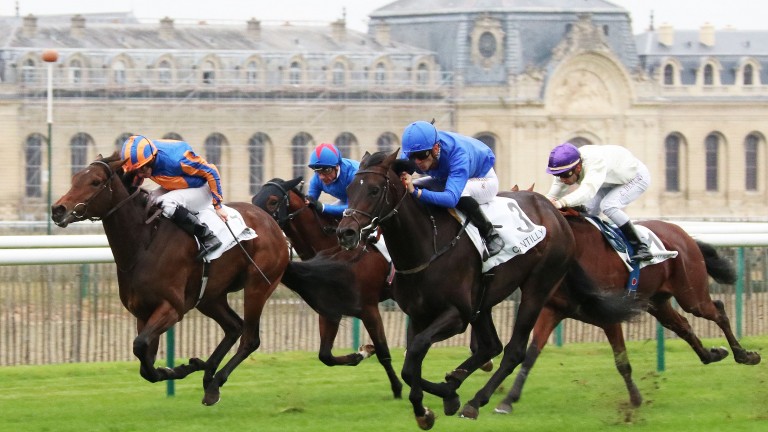 Royal Meeting continued Saeed Bin Suroor's golden October when running on powerfully to edge out Hermosa in the hands of Christophe Soumillon.

The success in the Group 1 Criterium International at Chantilly on Sunday followed three weeks after the Bin Suroor-trained Royal Marine's Prix Jean-Luc Lagardere victory at Longchamp and, remarkably, the pair are now the owners of two Group 1 successes from just five career starts between them.

"Christophe said he is a proper racehorse. He’ll probably go to Dubai now and we'll work out what the plan will be for next year.

"Saeed has had a brilliant few weeks, winning the Lagardere with Royal Marine and now this, along with two Group 1s in Australia [Benbatl and Best Solution] - it couldn’t be better."

With the Charlie Appleby-trained Quorto having landed the National Stakes, Godolphin head into the winter with three genuine Classic contenders.

Anderson added: "A mile is Christophe's suggestion for Royal Meeting but we'll leave it to Saeed.

"The great thing for him is he's got some great two-year-olds and can maybe make some interesting decisions, perhaps do things differently to before. But he knows what he’s doing and it’ll be down to him and the boss [Sheikh Mohammed]."

Frankie Dettori ensured there would be no hanging around aboard Kessaar and, while Ballydoyle's number one Hermosa took command halfway up the straight, Royal Meeting quickly became a major threat down the centre of the track.

Soumillon said: "He's such a well-balanced horse and I was always confident in the straight, although I was conscious not to attack too early against a battle-hardened Aidan O'Brien runner. I knew she'd fight and I stayed a bit wide so as not to give her encouragement."

After a lengthy debrief from Ryan Moore, Aidan O'Brien was far from disappointed with the performance of Hermosa, who had already shown her ability to stay further when second to Iridessa in the Fillies Mile.

The trainer said: "She ran very well and we’re very happy. She's a middle-distance filly and she’ll have no problem starting at a mile next year but I think she'll get a mile and a half. We'll train her for the Classics, the Guineas and the Oaks."

Thirty-five minutes earlier in the Group 1 Prix Royal-Oak, Holdthasigreen capped a fine year by securing a first top-flight success in a race that changed complexion when Flag Of Honour veered violently on the turn away from the stands, almost carrying out the previously unbeaten Brundtland.

Both rallied to pose some form of challenge in the straight, but it was Holdthasigreen that, having been presented with the lead under Tony Piccone, rallied to hold off Called To The Bar and Morgan Le Faye.

Jean Gilbert, owner-breeder of Holdthasigreen, said: "It's exceptional for the horse and of course for small breeders and a small trainer [Bruno Audouin]. We always believed in him and there was no reason not to, but it's fabulous to do this with friends and family.

"I thought he'd win the Cadran and I was a bit surprised the way he ran but these things happen. There was no reason not to come on for the Royal-Oak. He certainly prefers Chantilly to Longchamp so the change of venue for this race was a bonus for us.

Charlie Appleby, whose Brundtland finished a staying-on fourth, said: "William [Buick] said what happened with Flag Of Honour potentially cost us the race. We had to make up a lot of ground to get back into it. He’s run a great race and staying will be his forte next year."

Pia Brandt was another left to consider what might have been after Called To The Bar was left at the back of a strung out field before charging home to go down by three-quarters of a length.

"It was an extraordinary race and he has come second because the other horse [Holdthasigreen] was left in a better position after the incident," said a philosophical Brandt.

"We’ll look at the good races for stayers next year and maybe he could be stretched out a bit further. It would be a great challenge to win the Ascot Gold Cup."

Reviewing the run of Flag Of Honour, trainer Aidan O'Brien said: "He was spooked crossing the road. He’d probably never crossed a road like that."

FIRST PUBLISHED 2:59PM, OCT 28 2018
I was always confident in the straight, although I was conscious not to attack too early against a battle-hardened Aidan O'Brien runner