Holden in love with her Ex and dreaming of Cheltenham glory 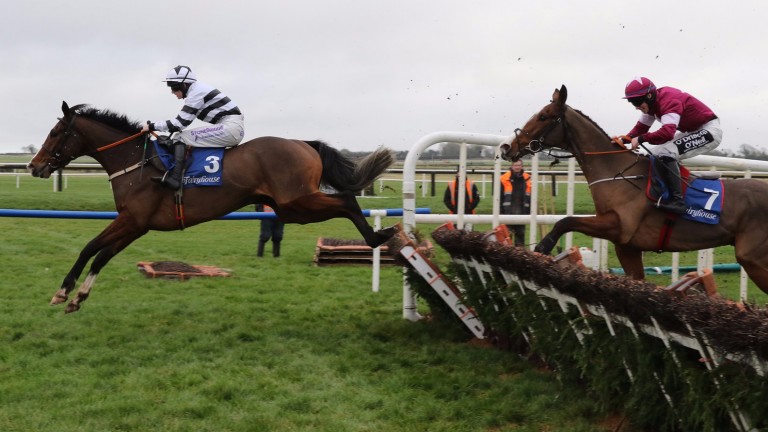 Ellmarie Holden is in love with her Ex; in her case JCB Triumph Hurdle hope Ex Patriot.

Holden took out her licence only in June 2016 and has just six horses in training, but she could have a genuine Cheltenham Festival contender on her hands on the evidence of her pride and joy's impressive jumping debut at Fairyhouse on Sunday.

A seven-race maiden on the Flat for Ger Lyons, Ex Patriot was snapped up for €38,000 by Holden at Goffs in November and she is already dreaming of Grade 1 glory, with the Spring Juvenile Hurdle at Leopardstown on February 12 on the agenda.

"He was an absolute natural from day one, he's just a machine," said Holden. "We were fairly confident heading to Fairyhouse but you never really know when it's your first go over hurdles. He can jump better than he did there too as he got in tight to one or two. There's a lot of improvement to come.

"He came out of the race in great form. he's flying. We'll take it easy with him for a week now and then get him ready for the Grade 1 at Leopardstown in February.

"That's the aim and that will tell us where we stand. I never dreamed I could have a Cheltenham contender this year, but, you never know, maybe it might happen. It would be a dream come true. You have to dream."

Trained by Holden and ridden by the red-hot Rachael Blackmore, Ex Patriot is certainly doing it for the girls.

"Rachael just has the magic touch," Holden said. "She's able to get horses jumping and they travel for her. She's super and was thrilled with Ex Patriot at Fairyhouse. All roads lead to Leopardstown now."

Ex Patriot can be backed at 40-1 for the Triumph with William Hill, but you can guarantee that price will tumble if he performs well at Leopardstown next month.