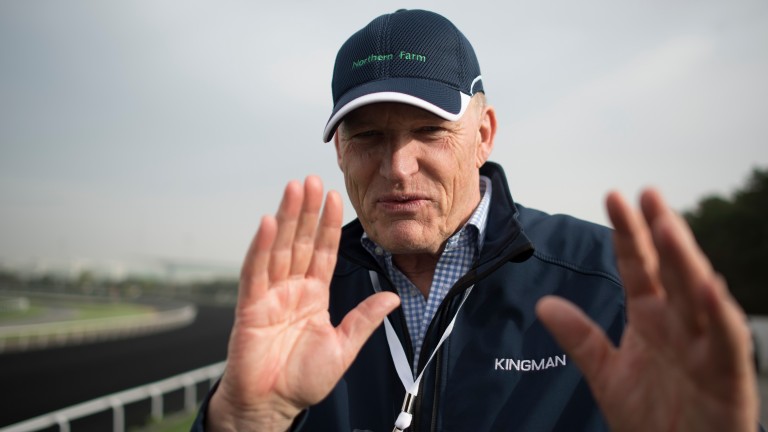 He is coming to the party a day late but John Gosden is preparing to arrive at Royal Ascot in style with a trio of favourites to unleash, headed by spectacular Dubai World Cup night winner Jack Hobbs.

But he makes up for it on Wednesday, confirming Jack Hobbs is "more likely than not" to take his chance in the Group 1 Prince of Wales's Stakes rather than wait for the Group 2 Hardwicke Stakes on Saturday.

Gosden believes Jack Hobbs will not be troubled by the lively ground on an afternoon when he has Laugh Aloud at the head of the market in the Duke of Cambridge and Gymnaste enjoying the same billing in the Sandringham.

Owned by Godolphin and partners, Jack Hobbs got his five-year-old campaign off to the best possible start when landing the Dubai Sheema Classic at Meydan in March. 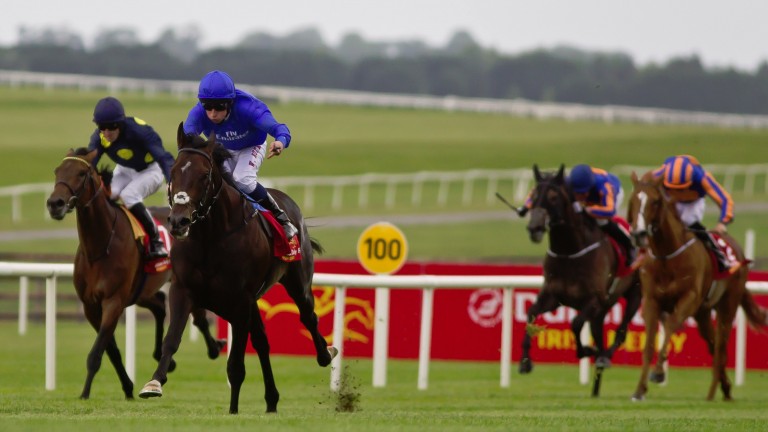 The son of Halling was on Thursday one of 17 remaining in the Prince of Wales's and a top-priced 11-4 ahead of Ulysses and Coronation Cup winner Highland Reel, who is also entered in the Hardwicke.

Jack Hobbs will be dropping back from a mile and a half but has twice finished third in the Champion Stakes over the Prince of Wales’s trip.

Gosden, whose third win in the race came courtesy of The Fugue in 2014, said: “He will be running on quicker ground than in Dubai but he has form on a fast surface so we are not unduly worried. He's been in good shape since Dubai, after which we indicated that Royal Ascot was his next stop."

Laugh Aloud will also be carrying the Godolphin colours in the Group 2 Duke of Cambridge. The daughter of Dubawi has run out an impressive winner of her last two starts, most recently in the Group 3 Princess Elizabeth Stakes at Epsom.

Gosden said: “Laugh Aloud is in good shape and the Duke of Cambridge Stakes has been her target all year. She goes on any ground so that shouldn't be a factor."

Mix And Mingle, the star of Chris Wall's Newmarket stable and winner of the Group 3 Chartwell Fillies' Stakes at Lingfield, is a top-priced 14-1 after being supplemented for the the Duke of Cambridge.

Last year’s winner, the Andre Fabre-trained Usherette, third in the Prix d'Ispahan, has also been added to the race.

Fabre said about the general 9-2 chance: "Usherette is in great form. She has run well this year and come on again for her run in the Ispahan. She worked over six furlongs on Tuesday just to sharpen her up. The quick ground is not a concern.”

The ground at Ascot on Thursday remained good, good to firm in places after significant watering.

Clerk of the course Chris Stickels said: "We put 7mm on the round course yesterday and 10mm on the straight course today. The plan is not to water on Friday but we may well do the day after. We will then review the situation as it supposed to be warm this weekend with temperatures around  27C."

He added: "High pressure is set to dominate all weekend with only a small chance that it will break down next Friday or Saturday. We expect it to be 24C on Tuesday and in the mid 20s thereafter."

FIRST PUBLISHED 7:22PM, JUN 15 2017
Jack Hobbs will be left in both the Prince of Wales's and the Hardwicke but is more likely than not to run on the Wednesday