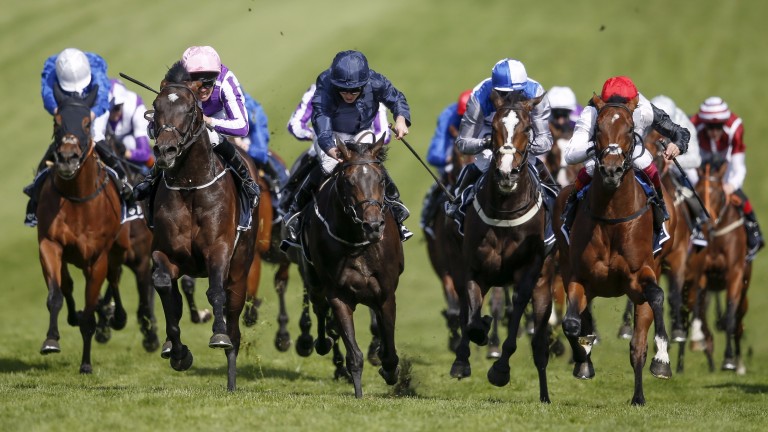 Cliffs Of Moher (centre, dark blue) bids for compensation after being caught close home in the Derby by Wings Of Eagles
Alan Crowhurst
1 of 1
By David Carr 7:45PM, JUL 7 2017

You don't have to be Theresa May to know the exquisite agony of failing to secure the victory that appeared yours for the taking.

Think of Jimmy White apparently easing to success in the last frame of the World Snooker Final, Jean Van de Velde needing just a double bogey to win the Open or Newcastle United coasting along a dozen points clear at the top of the Premier League.

Nor will the prime minister need reminding that once fate has intervened and bitten you on the backside you tend not to get another chance to put things right.

Perennial Crucible runner-up White retired without lifting the trophy; Van de Velde is remembered as the man who paddled in the water at Carnoustie, rather than as a Major championship winner. 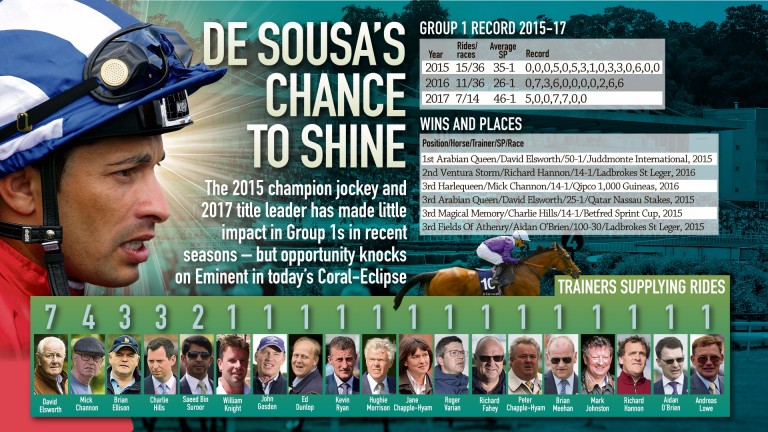 And although the Toon Army may have won two titles since their 'I would love it' season under Kevin Keegan, they both came in the Championship after the might of Tyneside suffered sheepish relegation.

But there's more hope for May in the fate of those colts who have snatched defeat from the jaws of victory in the Derby of late.

Dylan Thomas, Treasure Beach and further back El Gran Senor were all mugged late on at Epsom after looking set to win – and that trio went on to win three Irish Derbys, an Irish Champion Stakes, a Secretariat Stakes, a King George and a Prix de l'Arc de Triomphe between them.

Which will be no consolation to those who backed Cliffs Of Moher last month and were working out their winnings as he came with an apparently perfectly timed run to lead a furlong from home, only to watch in horror as he was caught close home by Wings Of Eagles.

But it does suggest he could land the Coral-Eclipse Stakes – the traditional first clash of the generations – to provide a happy end to a miserable week for Ballydoyle, which began with the enforced retirement of the Derby winner, doubts emerging over the future of multiple Group 1 winner Minding and smart filly Somehow suffering a fatal injury.

Although it's early days to be taking a definitive view of the Derby form, the early signs are good with Capri (sixth) and Cracksman (third) fighting out the finish to the Irish version, while Benbatl (fifth), Permian (tenth) and Rekindling (16th) have all landed Group races since.

Put to the test

However, this is the first serious test across the ages and has been ever since the Eclipse was founded by the spiritual ancestors of Great British Racing in 1886.

Sandown was doing something revolutionary in charging everyone to get in, not just those using the grandstand, and the half crown admission fee was plenty in those days.

So they attempted to draw the crowds by putting up a huge prize fund of £10,000, more than twice what the Derby was then worth, for a race pitting the Classic generation against their elders.

It's still box office 131 years later, as Prince of Wales's Stakes second Decorated Knight and third Ulysses take up the challenge of exposing any chinks in the highly touted three-year-olds.

But it's another Classic colt who has attracted just about the most interest in the build up – partly because he is in such apparent high spirits that he threw off his work rider Glen Osborne on Monday and left him in hospital with a broken hip.

Eminent has under a length to make up with the favourite and more positive tactics are reportedly set to be adopted this time on the come-from-behind Epsom fourth.

Martyn Meade has the right man on board as no rider is more guaranteed to get the best out of a horse than Silvestre de Sousa, who comes in for an overdue first Eclipse mount.

The champion jockey-in-waiting showed what he can do when landing the Juddmonte International with a masterful effort on Arabian Queen in 2015, but does not get the rides his talents deserve and has scarcely had a look-in at Group 1 level since.

He might have been on Barney Roy had his retainer with Godolphin worked out better – instead it is James Doyle on the exciting colt who looked better than ever in landing the St James's Palace Stakes at Royal Ascot.

No winner of that race has followed up in the Eclipse since Giant's Causeway in 2000, although that should not really be held against him since none has even tried since Black Minnaloushe the following year.

Those with a sense of history should cast a wistful glance up at the bet365 Lancashire Oaks at Haydock, where Abingdon could land one last big victory for Ballymacoll Stud.

Ela-Mana-Mou and Pilsudski both won the Eclipse for the bloodstock empire which was founded by Sir Michael Sobell and Lord Weinstock and whose imminent dispersal means the end of an era.

FIRST PUBLISHED 6:00PM, JUL 7 2017
This is the first serious test across the ages and has been ever since the Eclipse was founded by the spiritual ancestors of Racing For Change in 1886

'He's a horse we like a lot' - Roger Varian could hold key to big-field handicap Hong Kong adds voice to controversy over latest British racing start confusion 'They could have waited. They just didn't' - furious De Sousa blasts starter Ascot collector's item as Dettori's flying dismount outshone by tearful groom Love brightens the week for Aidan O'Brien but draw-bias punters are wrong-footed 'He shows everything at home - he relaxes, he quickens, he gallops'