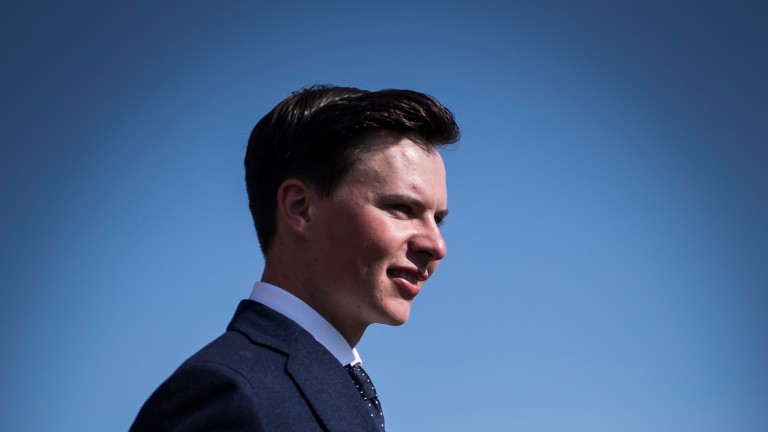 Joseph O'Brien clearly thinks there is safety in numbers and the 25-year-old trainer, who has sent out nine winners in the last fortnight, is responsible for four of the 23 runners in this handicap hurdle for conditional riders, which is confined to horses rated between 80 and 109.

O'Brien has had 482 runners under jumps rules in Ireland this season and perhaps Commandant is in the best position to provide him with another winner of the campaign.

In a race where recent winning form is hard to come by, Commandant has at least won a race this season. He was successful at Thurles in November, but that was the first of three starts in eight days and he did not complete the other two as misfortune proved his undoing.

Leave Your Mark is another worthy contender for O'Brien. Although unable to justify favouritism in a maiden hurdle at Thurles last November, he was beaten only half a length and begins his handicapping career off a workable mark of 107.

Gordon Elliott, trainer of Skeaping, Lake Malawi and Empire Burleque
Skeaping had been off a long time before running at Gowran last month and got quite tired. He's going to need this run so I'd say he's best watched for the time being. Lake Malawi has been off the track for 557 days so is going to need this. We’ve got plenty of work into him at home but a run on the track should bring him forward and I’m just hoping for a respectable effort. Empire Burleque hasn’t yet fulfilled the potential he showed when he won a bumper first time out. However, he hasn’t run too badly in his two handicap hurdle outings and his last run at Punchestown suggested he might not have to wait much longer to make his mark over hurdles, so I’m hoping he could go close.

Joseph O'Brien, trainer of Eviscerating, Leave Your Mark, Write It Down and Commandant
We're firing quite a few bullets at this. They are what they are, horses rated in the low 100s who we're trying to pick up a bit of prize-money with. Eviscerating was disappointing at Navan last time but ran well at Naas before that and can hopefully come back to that form. Leave Your Mark had disappointed us a few times in maidens but improved last time at Thurles and this is his first handicap. Write It Down needs to improve from what he has shown so far. Commandant has at least won for us and has had a break since he was pulled up at Limerick.

Padraig Roche, trainer of She's Made It and Rathbride Prince
She's Made It is very genuine and consistent, so in that regard she's her own worst enemy. I'd love to win a race with her as she has a lovely pedigree, and this might be it. Rathbride Prince has been disappointing but his jumping is getting better. This is his first run in a handicap.

Philip Rothwell, trainer of Wade Harper
The key is soft ground and unless the rain arrives I don't know whether he'll run. If he does take his chance I wouldn't be overly optimistic on this sort of ground. You'll see a different horse when there's more cut.

Dermot McLoughlin, trainer of Glendaars Warrior
I was thrilled with his run on New Year's Eve at Punchestown. He seems in good form and the trip is fine, so I'm hoping for a good run.