Hills and Ryan pay tribute after all-rounder dies at 92 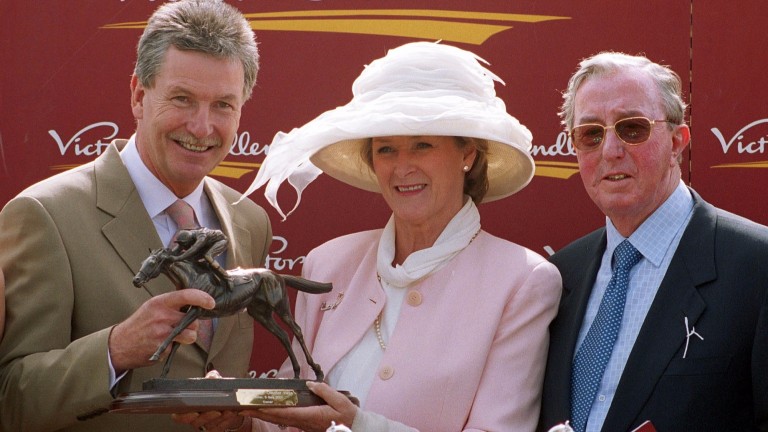 Jack Hanson (right) and Judith Boscombe receive the Chester Vase trophy from Victor Chandler's Neal Wilkins after the success of their Mr Combustible in 2001
1 of 1
By James Burn 6:05PM, DEC 23 2016

Jack Hanson, a racing all-rounder who rode, trained and owned winners, has died at the age of 92.

Hanson, a successful Yorkshire businessmen, started as an owner and enjoyed wins in the Manchester November Handicap with Torch Singer (1953) and Tearaway (1955).

Further success came courtesy of Beau Rossa in the 1961 Zetland Gold Cup and Crisalgo in the 1973 Chester Cup. After riding ten winners on the Flat as an amateur in the 1960s, Hanson decided to train in 1975.

From his base near Wetherby, he sent out Frankie, who was probably his best horse, to finish fifth to Wollow in the 1976 2,000 Guineas, while Sultan's Ruby was second in what is now the Racing Post Trophy that year.

He also won the Imperial Cup (Winter Melody) and River Don Novices' Hurdle (Hurdy) before giving up training in 1998.

Hanson then established a long association with Barry Hills and part-owned the trainer's 3,000th winner Chapter And Verse. He also had a share in Mr Combustible, the 2001 Derby fourth whom he wanted to call Mr Grumpy in honour of Hills.

Chapter And Verse (Michael Hills), who became the 3,000th winner for Barry Hills, was part-owned by Hanson
Martin Lynch
Other horses of note included Torch Rouge, The Last Drop and Above Average, while he was involved with Highclere's syndicates for more than 15 years.

"I think I started training for him in the early 1990s and trained more than 70 horses for him over the years," said Hills.

"Torch Rouge won the Brandenburg Trophy in Berlin and was then second at Churchill Downs before we sold him to Bobby Frankel.

"Jack will leave a big gap in racing and was a great supporter. He was fond of his fellow owners and racing was dear to his heart. He had a lot of friends and a lot of stories. There are not people like him about today."

Close friends with fellow owners Sir Alex Ferguson and Sir Robert Ogden, Hanson more recently had horses with Kevin Ryan, including Top Of The Bank, who won at Thirsk in April.

Nautical Haven: the York winner was owned by Jack Hanson and Sir Alex Ferguson
Martin Lynch
"I had horses for Mr Hanson for about ten years and he was a great man, a character who was great company to be in," said Ryan. "He loved to take you out for lunch and enjoyed life to the full.

"He loved his horses and was very knowledgeable. He was also a very kind man and looked after the staff – he was a lovely person to know."

FIRST PUBLISHED 6:05PM, DEC 23 2016
He loved his horses and was very knowledgeable