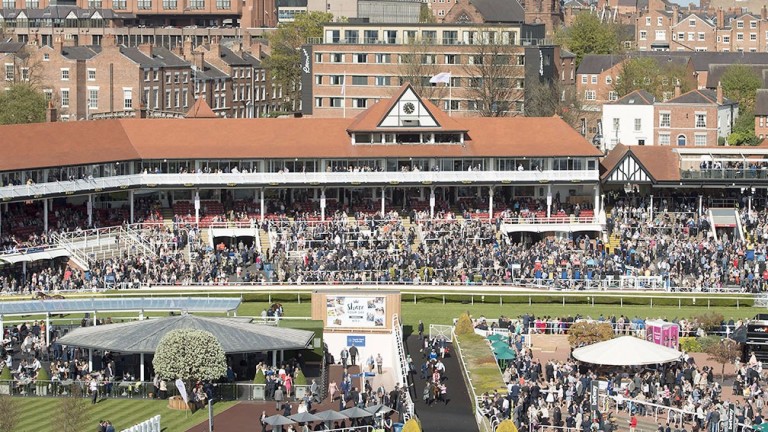 Lawney Hill has called for all racecourses to follow the example of Goodwood, Ludlow and Windsor by having horses led anti-clockwise in the parade ring in the interests of safety.

Speaking in the wake of the incident on Wednesday when Anna Lisa Balding narrowly avoided serious injury when Chester Cup winner Montaly lashed out, the trainer said: "I feel very strongly about it and it's something we need to get organised. It's so much safer.

"When you leg up a jockey you then have to wait for the horse to go past, because you can't run around in front of it. You are then trapped against the rail, so if a horse kicks out you're trapped.

"On the other hand, if you lead round anti-clockwise you have the handler between the horse and those in the paddock, who don't all have that much horse sense, and then when you've legged up you have space to walk away.

"Paddocks are broadly the same shape, so it wouldn't cost anything to do, and I believe we are allowing tradition to stand in the way of safety."

Goodwood is believed to have been the first UK track to break with tradition, and it came as a consequence of seeing how things are done in the Middle East.

Clerk of the course Seamus Buckley explained: "It was an idea I picked up from Dubai and Abu Dhabi when visiting my brother Pat, and I think we must have been doing it for ten or 12 years now.

"I introduced it because I'd seen so many trainers and travelling head lads almost wiped out when legging up between horse and rail. I'm convinced it's much safer, but not everyone agrees."

Officials at Chester have reviewed parade ring procedures, but argue that a change in direction might increase the danger.

Clerk of the course Andrew Morris explained: "We have discussed it with the BHA and the course inspector since the incident on Wednesday, but we don't have enough of a gap between the horses and racegoers for them to go the other way round.

"If they went the other way, the rear-end of the horses would be pointing towards the crowd so we would need a wider gap."

The BHA makes a variety of stipulations regarding parade ring construction, but regarding direction there is the merest footnote.