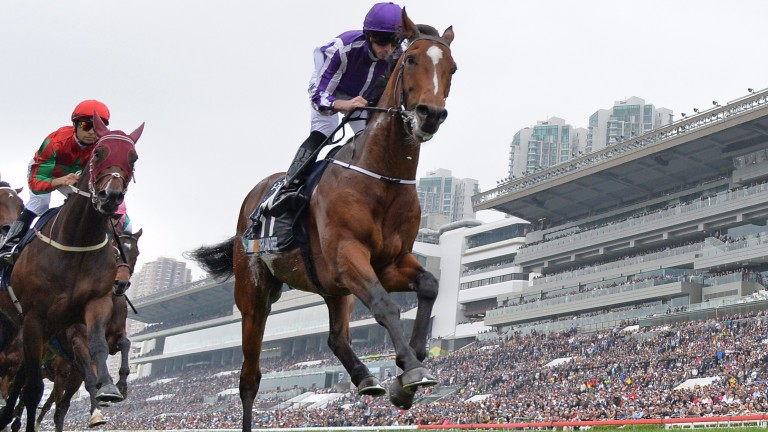 Highland Reel was just denied in his defence of the Hing Kong Vase
Hugh Routledge
1 of 1
By Stuart Riley in Hong Kong 10:29AM, DEC 8 2016

Last year Highland Reel had to overcome a less than helpful draw of stall nine to win the Group 1 Longines Hong Kong Vase and if he is to become just the third dual winner of the famous trophy he will have to do so from one berth wider.

Big-race partner Ryan Moore will in all likelihood ride a very similar race, but his chances of grabbing the lead and the rail as he did last year have been done no favours by the drawing of confirmed front-runners Helene Happy Star and Michael Bell's Big Orange inside him in stalls six and seven.

For his part, Bell was delighted with the draw. He said: "Seven is a lucky number in a lot of languages so that bodes well. It's not too low and it's not too high, it's almost exactly where I wanted to be. I felt beforehand somewhere between four and eight would be ideal so I'm very happy."

Bell earlier watched Big Orange breeze under regular work rider Gillian Dolman for the first time in almost a month as the five-year-old stayed in Australia after the Melbourne Cup and Zipping Classic.

"I was very happy with him," he added. "It's quite difficult when you've only just got off the plane and seen the horse for the first time but I thought he looked in very good shape and it will be interesting to see how much he blows after but visually it looked good.

"Highland Reel is the one we've all got to beat, but if he fails to perform it's an open contest and Big Orange is in the mix. Over a mile and a half on a fast flat track he will be up with the pace for sure."

With the bend coming very early in the Sprint, Richard Fahey's Growl was handed an unfavourable wide draw in stall 12, a race in which Ryan Moore's mount – ante-post favourite Big Arthur – was also done no favours in 13. Silvestre de Sousa's mount Peniaphobia managed to overcome stall 14 to win last year and he comes from stall one this time.

In the Mile Aidan O'Brien's other runner Cougar Mountain drew stall seven, while Moore, who instead rides Neorealism for Noriyuki Hori, will come from stall nine. De Sousa's mount Sun Jewellery is in stall three.

Last year's pillar-to-post Cup winner has been handed the plum draw of one for his defence, while last year's Mile winner Maurice will come from stall eight in what could be the race of the day.