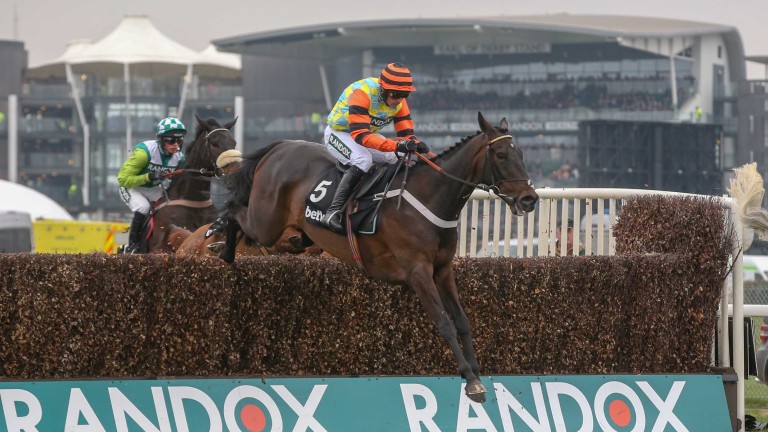 Nicky Henderson drew comparisons between Betfair Chase hopeful Might Bite and the great Sprinter Sacre as he prepares for his Cheltenham Gold Cup runner-up to return to action at Haydock on Saturday.

The nine-year-old enjoyed an outstanding campaign last year, winning the King George and Betway Bowl, with a sole defeat to Native River in the Cheltenham Festival showpiece.

The Knot Again Partnership-owned Might Bite is priced at 10-11 by the race sponsors to overturn that rival this weekend and land the £200,000 chase – one of few British Grade 1 races that have eluded the Seven Barrows maestro.

Henderson said on Tuesday: "Might Bite is in terrific form, he couldn't be better. Noel Fehily came and schooled him yesterday and he said 'that's quite a nice way to start a Monday morning'. It was beautiful to watch.

"He's a spectacular looking horse. He's getting into the Sprinter Sacre mould of quality and class. He looks that way, he just looks really good."

Bookmakers expect Might Bite to be better suited by the sharper track and slightly shorter trip than his Gold Cup conqueror Native River.

"He goes around Kempton well so I don't see why Haydock won't suit him," said Henderson. "I know one is left-handed and one is right-handed but they're flat tracks and you could possibly think an easy three miles is more his scene.

"I'm looking forward to taking on Native River – it's good fun and it's good for racing. This is going to be a proper race."

Henderson was speaking at Newbury where he galloped stars Buveur D'Air and Altior, and he enjoyed reflecting on Might Bite's seven-length Aintree success on his final start in the spring.

He said: "I thought that win was his best and I was most proud of him at Aintree. To come back from the battle he had at Cheltenham and then win was terrific. I had so much admiration for him."

Paul Nicholls sends the unexposed Clan Des Obeaux to Lancashire in an attempt to upset the odds.

The lightly-raced six-year-old was third to Might Bite at Aintree on his last outing but connections are expecting a big season for their chaser.

Harry Derham, assistant trainer to Nicholls, said: "It's been well documented that we didn't have a great run with him last season and I thought his Aintree run was good.

"He's improved an awful lot – he's a young horse and I could see him running well."

Clan Des Obeaux is a 8-1 shot with Betfair, and a best-price 12-1 with bet365, and Derham feels the son of Kapgarde has the potential to win at the highest level.

Derham said: "He's got a long way to get to the level of them [Might Bite and Native River] but I suppose when he's a young horse you have to dream that he might.

"I do think he can compete with them. I don't know if he can beat them, but we've always thought he has the potential to be a Grade 1 chaser. He just has to go and prove it now."

FIRST PUBLISHED 6:42PM, NOV 20 2018
He's getting into the Sprinter Sacre mould of quality and class