Mullins: Kemboy looks the one for me in Ladbrokes Trophy 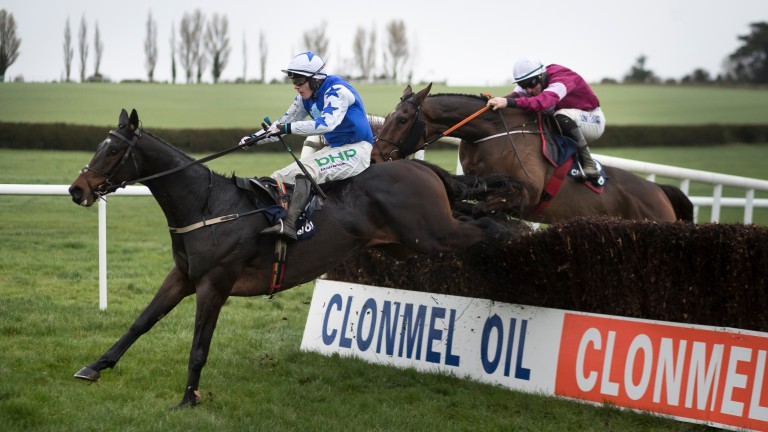 Kemboy was on Tuesday cut into a general 8-1 (from 10) for the Ladbrokes Trophy after trainer Willie Mullins enthused about his chances of delivering the yard a second straight win in the race.

The six-year-old received a 4lb penalty for his three-length victory over Alpha Des Obeaux in the Clonmel Oil Chase last week but Mullins, who won Newbury's biggest jumps race with Total Recall last season, is content with that.

Mullins said: "Kemboy looks the one for me. He's picked up a 4lb penalty but we had a good reason to run him in the race. He was entitled to win that race [Clonmel Oil Chase] but he surprised me with how he did it.

"He's fit and well, goes on variations of ground and improving. We're very happy with him and look forward to letting him take his chance."

Mullins could run four horses in the £250,000 contest on December 1 at the Ladbrokes Winter Festival, including Rathvinden, winner of the National Hunt Chase at the Cheltenham Festival in March.

He said: "I'll probably take Al Boum Photo and Invitation Only out and the ground will probably be too quick for Up For Review and Isleofhopendreams.

"Rathvinden is one I'd like to take over and Pairofbrowneyes too. He will need a few to come out but I'm sure he'd get in."

All systems go for Thomas and Tom

Elegant Escape and Thomas Patrick, the only two on Tuesday who were shorter in the market than Kemboy, clashed at Sandown this month, with the latter beaten by half a length.

Thomas Patrick galloped at Newbury on Tuesday and trainer Tom Lacey said: "He went really well and we couldn't be happier with him. He's a lot sharper after running at Sandown. He hasn't done a huge amount of work since and will come on for that run. 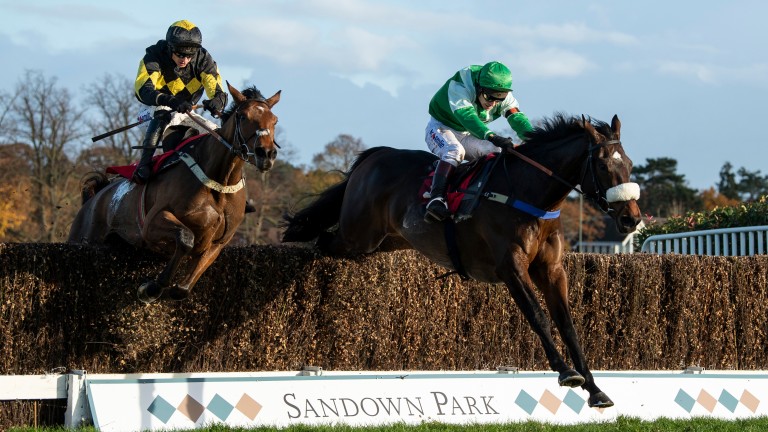 Elegant Escape (left) and Thomas Patrick (right) set for a rematch at Newbury following a clash at Sandown
Edward Whitaker (racingpost.com/photos)
"He's taken a step forward from last year but he's only six and there could be more to come. He needs genuine soft ground to be at his best.

"He has a lovely racing weight, his jumping is quick and accurate and I see no reason why he can't run a big race."

The Tizzard camp, who enjoyed Ladbrokes Trophy success with Native River in 2016, have plenty of confidence in general 6-1 favourite Elegant Escape.

Joe Tizzard, assistant and son to trainer Colin, said: "Elegant Escape is in good form and will sharpen up for his last run. We were really keen to get a race into him and he performed very well.

"Tom [O'Brien, jockey] was really happy with him, he thought if he'd jumped the last better he may have won a bit easier. The Ladbrokes Trophy is his big target and he ticks a lot of boxes."

Paul Nicholls has won the race three times, including twice with Denman, and Black Corton spearheads his charge at the Grade 3 event.

"He's on a high mark and the last race at Wetherby showed where we are with him, but he's a rock solid horse and you'd like to think he'll run his race again."

FIRST PUBLISHED 11:24AM, NOV 20 2018
We're very happy with him and look forward to letting him take his chance