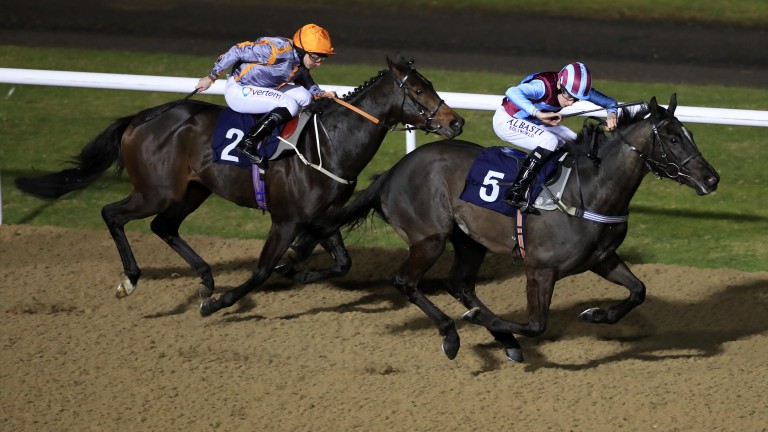 Nortonthorpe Boy proved to be ahead of the handicapper once again to win a fifth race from his last six starts and become the winningmost horse on the all-weather this season.

The Phil McEntee-trained three-year-old's winning sequence began at Wolverhampton in December when rated just 58 and, through a pair of subsequent victories at Kempton and another at Wolverhampton, he has climbed to a mark of 74.

Not even a 6lb penalty was enough to stop him on this occasion as he scooted clear off the home turn under Luke Morris to hold off the fast-finishing Rohaan by a length and a half.

"Phil's done a remarkable job with him," said Morris. "He picked him up for nothing and then he only scrambled home in a bad race at Wolverhampton.

"He's been a revelation and is able to run every week while holding his form. I had a tactical advantage today with the ones behind me and thought I might be able to catch them out coming round the turn."

Lawes spent five years working under Henderson at Seven Barrows before branching out on his own prior to the 2019 jumps season.

Torolight joined him last month and following a muted stable debut over course and distance a couple of weeks ago, he eased clear of his 11 rivals under Ben Curtis here to record a first victory since April 2019.

Curtis said: "The addition of blinkers helped him today and I put a blindfold on him in the stalls hoping we'd jump a bit quicker. We still weren't rapid out, but quick enough to get to the front.

"I started to stretch them from four furlongs out because he has an abudance of stamina and he stuck on well to the line."

FIRST PUBLISHED 5:30PM, FEB 19 2021
Phil's done a remarkable job with him. He picked him up for nothing and then he only scrambled home in a bad race at Wolverhampton