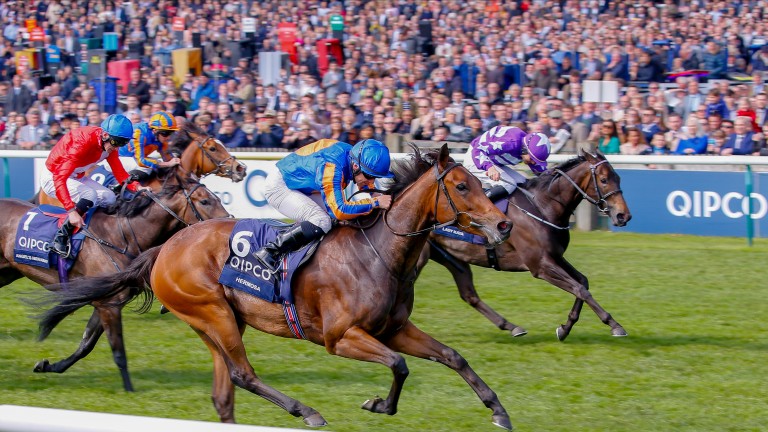 Glorious Goodwood's day three highlight has attracted a line-up more than worthy of its £600,000 purse. Predicting which of the nine runners will take the lion's share of the pot is far from easy.

The bookmakers are siding with Hermosa - and one can hardly blame them. Ballydoyle's candidate was crowned a 1,000 Guineas heroine at Newmarket and the Curragh, where she was particularly impressive when storming to a four-length triumph. Yet that made her subsequent Coronation Stakes defeat at the hands of 20-1 outsider Watch Me all the more disappointing.

Watch Me's trainer Francis Graffard is trying to topple Hermosa once again, this time with Prix de Diane winner Channel. Graffard knows how to beat the Aidan O'Brien-trained star. Like O'Brien, Sir Michael Stoute and John Gosden know how to win the Nassau.

Stoute has taken the prize seven times - the first of the victories coming way back in 1977 - and now saddles Rawdaa and Sun Maiden. Gosden, who has four Nassaus to his name - the same total as O'Brien - fields second favourite Mehdaayih under the rampant Frankie Dettori.

We may still not have named the winner, which could certainly be the William Haggas-trained Maqsad, freshened up for this after failing to stay in the Oaks. She might well bounce back, but this could also be a Nassau won by Deirdre, either the Japanese raider ridden by Oisin Murphy or the wife of Mark Johnston, responsible for talented outsider Nyaleti.

The afternoon's other two Group races differ in many ways, not least the fact that while recent Richmond Stakes winners have tended never to win another race, horses who land the Gordon Stakes have gone on to achieve incredible things. That has seldom been more true than in the last four years, when the honour roll has been graced by Cross Counter, Crystal Ocean, Ulysses and Highland Reel. Heading up the market on this occasion is the O'Brien-trained Constantinople, a colt who looked blessed with enormous potential when second at Royal Ascot.

One suspects the newcomer O'Brien saddles in the juvenile fillies' maiden also boasts rather a lot of potential. Her name is Salsa. Her father is Galileo, her mother is Beauty Is Truth and her full-sister is called Hermosa.

For an extremely blue-blooded Coolmore family this could be an extremely fine Goodwood afternoon. Given the quality of the Thursday action, it should be more than a little enjoyable for the rest of us as well.

A JP McManus-owned hotpot in the Guinness Galway Hurdle is a bit like Tiger Woods hovering towards the top of the leaderboard in the US Masters. Augusta will always be enjoyable to watch whether he turns up or not, but the four days are far more intriguing when he's there.

It is the same when the favourite for Ireland's joint-richest hurdle race is dressed in green and gold. The big one on day four at Ballybrit is always one of the most eagerly-awaited races of the whole year no matter who's in the field but, when McManus is responsible for the jolly, it escalates to a whole new level.

The rumour mill will be doing endless overtime around the enclosures and finding a conversation without Band Of Outlaws in it will be like trying to find someone sober.

Don't be surprised to hear stuff like: 'he's been aimed at the race since he was in nappies'; 'he has two-stone in hand'; 'he will win the 2020 Champion Hurdle'; 'he was only half-fit when Thomas Hobson beat him at Tipperary' and 'he will win by half the track'.

You have to make up your own mind whether any of the rumours are true but, a word of warning, Ballybrit does hyperbole better than anywhere else.

Here are the facts. The positives first. Band Of Outlaws is a very good four-year-old and fully deserves his rating of 145. He coped remarkably well with the hustle and bustle of a big field when storming home to take the Fred Winter at Cheltenham. He is a slick jumper, has a smart turn of foot and rain won't bother him in the least as he's at home on soft ground.

Now for the negatives. He has had only six starts over hurdles and lacks the experience of some of his rivals and, perhaps more worryingly, no four-year-old has won the Galway Hurdle since Perugino Diamond in 2000, and the last one to do it before him was Pinch Hitter in 1982.

Do you back him at 4-1 or probably shorter? The choice is yours. If he is going to win the Champion Hurdle next March, as our very own Tom Segal thinks, he would want to be winning a handicap off 145, that's all I know.

There are alternatives, though, and loads of them. Willie Mullins has won the race twice in the last three years and cases could be made for all four of his representatives this time around. Does the fact Paul Townend has sided with Shanning suggest he is the number one hope? Possibly.

If fairytales are your thing, then look no further than Sole Pretender. The prolific five-year-old was only rated 115 in April, now he's up to 147 after winning at Ballinrobe twice and at Wexford. He is trained in the nearby town of Gort by Norman Lee and victory would give him by far the biggest victory of his career. We all love a rags to riches story, don't we?

We all love a good, old-fashioned JP McManus gamble too and Band Of Outlaws is a prime candidate for a right old plunge. How could you not love the Galway Hurdle.

Known in its heyday as the Extel, this year's running has a smaller field than usual but it does have Walkinthesand and Korcho, first and second in a similar event at Newmarket's July festival.

Spanish Mission is not yet entered in the St Leger but he looked a proper Leger type at Newmarket last time and seeks to confirm that impression in this famous trial.

A fabulous race, in which dual 1,000 Guineas heroine Hermosa meets French Oaks winner Channel and a host of high-class British fillies in a top-flight test to savour.

A cracker of a Grade 3 novice chase with Willie Mullins' dual purpose star Wicklow Brave out to make it two from two over fences.

Ado McGuinness had a big day on Tuesday at Galway and has solid claims of landing another big prize with the evergreen Master Speaker and Sirjack Thomas.

Michael Halford's Surrounding is in the form of her life and will try to back up her recent Group 3 success by carrying top weight to victory under regular rider Ronan Whelan.

Cheltenham festival winner Band Of Outlaws is likely to be at the head of the betting as Joseph O'Brien chases his second win in the race.

Poetic Flare still leads the way in Cartier standings despite Sussex defeat Peslier to ride Wonderful Tonight in Arc as Goodwood trophy reaches Menuisier 'We weren't seeing eye to eye' - Joorabchian's reasons for split with Beckett Drink, drugs and fighting the biggest turn-off for racing's fan base Wonderful Tonight sails on but which French jockey will get the Arc call-up? Up 23lb and he bolts in - Mr Wagyu defies the handicapper once again