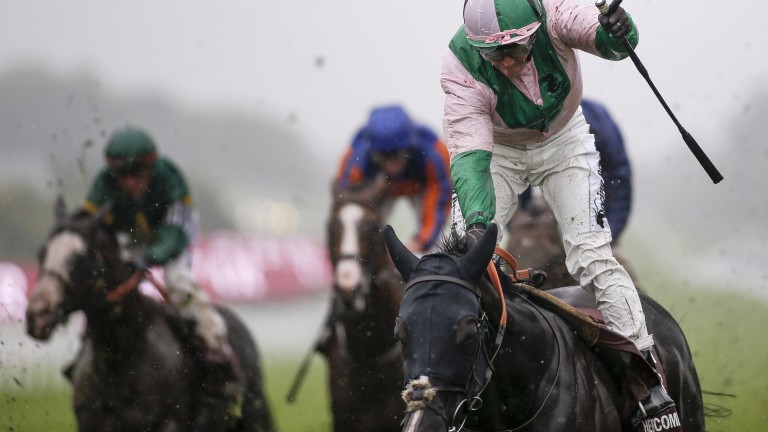 Jim Crowley celebrates after riding Here Comes When to win The Qatar Sussex Stakes
Alan Crowhurst
1 of 1
By Stuart Riley 10:38AM, MAR 28 2018

The transition from champion jockey to regular Group 1 winner is not an easy one but Jim Crowley has made it seamlessly as he landed his second success at the highest level in as many months when he and gritty partner Here Comes When saw off the persistent Lightning Spear and then late-surging Ribchester.

Hot favourite Ribchester's task had seemingly been made easier by the withdrawal shortly before the race of his chief market rival Churchill on account of the ground but, while all three principals simultaneously looked like winning in the tight finish, once again it was Crowley who came out on top of a thriller.

Ulysses may have won the Eclipse under the reigning champ by a too-close-for-comfort nose, but this time Crowley could properly enjoy every inch of the final stride, with a much more comfortable margin of a neck. 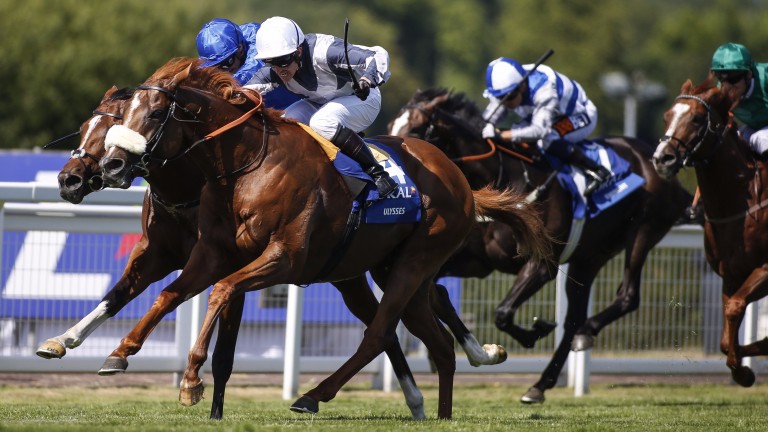 Those narrow margins, and the fact that both wins have come on horses not expected to finish in the first three by the pre-race market, only further the impression that Crowley has finally arrived on the stage he was born for.

It was this time last year that Crowley decided to fully commit to a title push with the original plan to contend this year.

So did he dream it would go this well? “Yeah, of course I did,” was his playful response.

But underpinning Crowley's success has been his consummate professionalism and he was quick to heap praise and thanks on others.

He said: “I went to the paddock and told them I’d be disappointed if he’s not in the first three; obviously if Ribchester coped with the heavy ground he would win, but if he didn’t I thought we’d have a right chance, and it worked out.

“Fair play and thanks to Jim and Fitri [Hay] and Andrew [Balding] for running him – he’s a good horse on that ground, he’s won Group 2s. He’s had his conditions and he’s done it on the day. It’s just great.”

It has been some journey to get here, Paul Hanagan and Silvestre de Sousa have proved how hard a transition it is in recent years, and Crowley started from the far more inauspicious position as a middling jumps jockey.

At least he was conditioned to the brutal weather conditions and now all that remains is a top-level success for boss Hamdan Al Maktoum to cement that partnership. 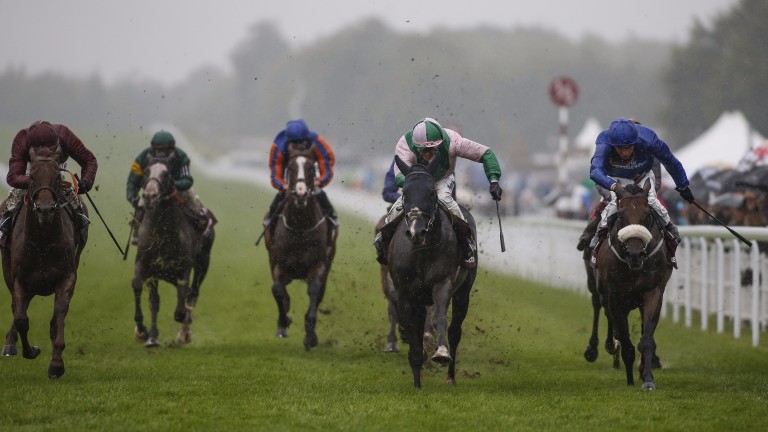 The field were spread out down the straight
Alan Crowhurst

Yet even Crowley's path has not been as convoluted as that of Here Comes When, the seven-year-old who had run only at Listed level this year and been beaten by 14 horses on his three previous attempts in Group 1 company.

Despite being the soft-ground horse in the race, he was still sent off at 20-1, but he came home in front to the shock of all bar perhaps owners Dr Jim Hay and wife Fitri – for whom he was a first Group 1 winner outright in their own name at their favourite meeting.

Unsurprisingly, not even the torrential rain could dampen Hay's spirits. “I’m Scottish, I don’t care,” he said of the weather before adding: “This is just unreal. On this ground I thought he had every chance.

"We have a lot of connections with Coolmore and we knew they were worried about running Churchill on ground like this, and why would you? He didn't run, while I wasn’t convinced Ribchester would handle it, he didn’t at Meydan, and I knew the softer it gets the more our guy is going to love it. He’s a top class horse.

“If you include Cape Blanco and Fame And Glory, we’ve won quite a few [Group 1s], but always in partnership with Coolmore – this is the first entirely in our own name. Here Comes When has already won three Group 2s. He’s no slouch. He’s just always needed cut.

“Andrew has done the most fantastic job keeping him sweet. He’s had a lot of niggling problems over the years but that’s racing and you have to tough it out. And then you get a day like this!”

On the added bonus of the winner coming at Glorious Goodwood, he added: “We’ve had the number one box here for the last seven or eight years, we keep coming here. Royal Ascot’s a big meeting for us but we’ve always liked Goodwood more than anything, despite this weather!”

THE Sussex Stakes was the second European race in the Breeders’ Cup ‘win and you’re in’ series, meaning that Here Comes When is guaranteed a slot in the Mile at Del Mar should connections wish to head to California in November. There is also a travel allowance, with all entry fees paid.

Royal approval: King's Lynn and Oisin Murphy going all out for Ascot Group 1 Never in our lives have we seen anything like it - Snowfall reigns in the rain The one and only: Bolshoi Ballet must show why he was singled out for Derby Youth Spirit owner relishing Derby after nearing end of two-country quarantine One jockey, one trainer, one horse and one race to watch at Epsom on Friday Homebred win would be 'so special' for Shadwell as Zeyaadah leads Epsom assault